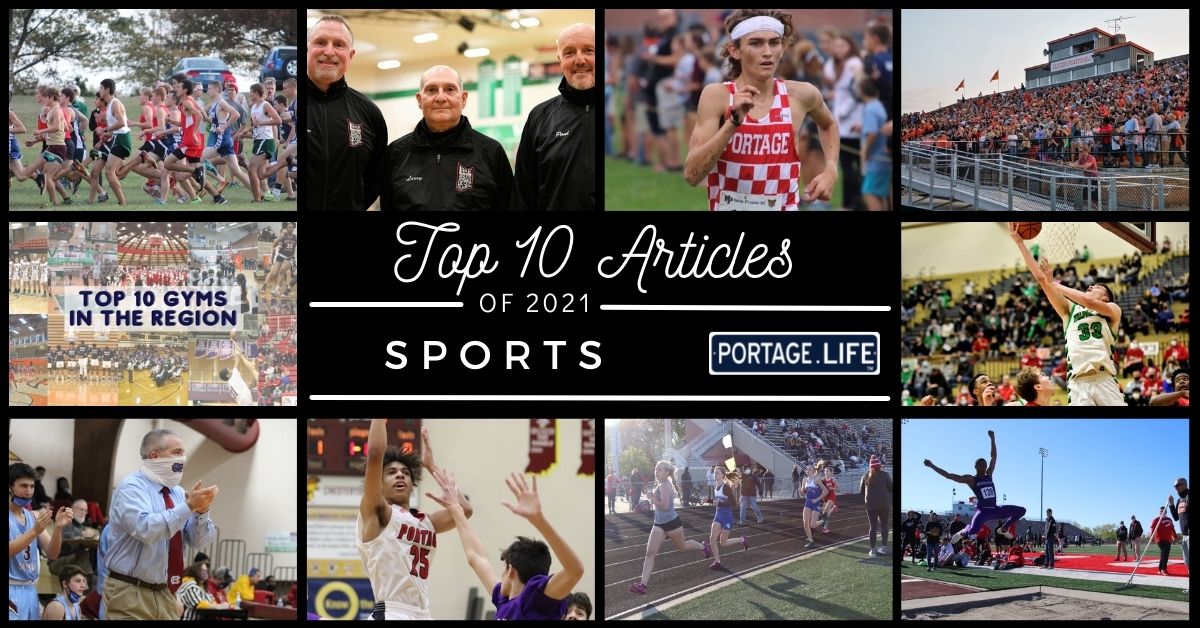 Region athletes brought the excitement in 2021 as they took the field, court, track, mat, course, stage, and so much more to show off their skills and prove that their hard work has paid off. With so many different games and matches happening across high school and college teams in our area, it can be hard to keep track of all the memories and incredible moments in action.

We have summarized the best sports articles from this past year so you don’t have to. These are the highlights from basketball, football, swimming, running, gymnastics, volleyball, wrestling, baseball, tennis, softball, golf, and many more.

In no particular order, here are the top 10 sports articles from Portage.Life in 2021:

Portage defeats Hobart in overtime and moves on in IHSAA sectionals

Chesterton High School hosted Portage and Hobart’s boys basketball teams this Monday night for the first Sectional match. Both teams came in with a 7-14 record, and the game did not disappoint.

Portage began the night in the lead, getting the tip and a quick three pointer from Anthony Williams to give Hobart the momentum. In the second half of the quarter, Hobart forced multiple turnovers but was unable to stop the Indians’ drives. The Indians ended up with a small lead of 15-14.

Words cannot describe the action filled Friday night as the IHSAA Sectional Basketball Semi-finals commenced at Chesterton High School. In the first game, the Lowell Red Devils took on the Portage Indians. The game could not have been much closer as the two teams battled to the end.

Bryon Clouse is set to become the head basketball coach at Portage High School. The announcement comes weeks after Rick Snodgrass retired from the position. Clouse will also be hired as a teacher at the high school.

Clouse has spent the last nine years coaching at Hanover Central High School, where his teams have seen immense success, including two sectional titles in 2019 and 2020.

On Tuesday athletes from all around the Region gathered in Chesterton to compete in the Duneland Athletic Conference Track & Field Meet. This event was just the girls, with the boys competing on May 12 in Crown Point.

While the weather was freezing and athletes cowered in blankets and jackets, when they arrived on the starting line their shivers faded away into complete focus.

“This is a wonderful competition,” Michigan City High School senior Kaydarious Jones said. “I’ve met so many friends around the neighboring cities. I play football also, and it's not this much of a friendly environment. [Here], everybody shows love.”

Friendship met sportsmanship at the 2021 Duneland Athletic Conference (DAC) for boys track and field, where they made the perfect pair. Eight schools across the Region competed in various events, ranging from distance running to long jump.

Growing up playing sports in Portage

Top 10 gyms in the Region

The State of Indiana is notorious for being a basketball state. There is a saying that goes, “In 49 other states, it is just basketball,” and that still holds true today. Many of the country’s largest high school basketball gyms call Indiana home, and a few of those are located right here in Northwest Indiana.

Here is a list of 10 of the best basketball gyms in Northwest Indiana in alphabetical order.

Your guide to cross-country courses in the Region

The Region is littered with various types of cross-country courses. From Agony Hill at the forefront of New Prairie High School's famous cross country (XC) course in New Carlisle to the twists and turns of Sunset Hill Farm County Park in Valparaiso, there are different aspects that make each one a unique place to race. Some courses feature hills, like the trails of Sunset Hill, while others feature flat stretches that make them faster than others, like Lake Central High School’s home course.