A Weekend in Cooperstown- Ron Santo Hall of Fame Induction 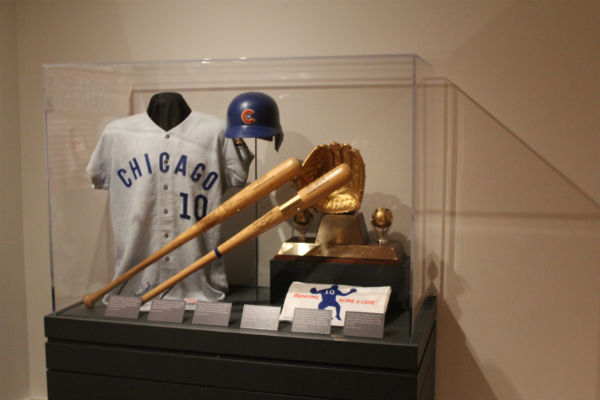 Ron Santo was posthumously enshrined in the National Baseball Hall of Fame with the induction ceremony taking place on July 22. Although the induction was long overdue and should have come during his lifetime, it was a great weekend of memories and celebration for Santo’s family, friends and fans. I was pleased to be able to make the trip and witness the induction first hand; here are my thoughts on the weekend.

The National Baseball Hall of Fame Museum
Every baseball fan should make the trip to Cooperstown to see the museum at least once. This was my first chance to step inside the National Baseball Hall of Fame and it is truly amazing. More than any other sport, baseball is about history, records, numbers, stories and statistics. All the stories of baseball’s past, from recent years back to the birth of the sport, are told inside the walls of the National Baseball Hall of Fame. The museum is extremely large with many exhibits that take large amounts of time to read and examine. For those that make the trip to Cooperstown, I recommend purchasing the Hall of Fame One Year Membership, which is just slightly more expensive than a one day pass. The yearlong membership gives you complimentary admission to the museum for a year, allowing you to come and go as you please throughout your trip. There is so much to view that is would be difficult to get to everything in one day. I spent several hours touring the Hall of Fame for four consecutive days. Members also receive a Hall of Fame Yearbook, bi-monthly magazine subscription and ten percent merchandise discount, among other benefits.

Chicago Cubs Fan Fest
On Saturday afternoon, the day before the induction ceremony, the Chicago Cubs organization hosted a Fan Fest to celebrate Santo at Fennimore Art Museum in Cooperstown. This event was the highlight of my weekend. Cubs fans packed the lawn just outside of the Fennimore. The Cubs organization provided free hot dogs, hamburgers, popcorn, hot pretzels, ice cream and other food items to the fans who attended the event. A $10 donation to Cubs Care was recommended but there was no admission fee. Question and Answer sessions were held throughout the day, hosted by Cubs play-by-play broadcaster and Santo’s partner for 15 years on WGN Radio, Pat Hughes.  He shared his favorite Ron Santo stories and encouraged fans to step up to the microphone and do the same. Guests throughout the day included Cubs of the 1960s such as Santo’s roommate and second baseman Glenn Beckert, ace pitcher Fergie Jenkins, first baseman Ernie Banks, outfielder Billy Williams and catcher Randy Hundly, all of whom were in Cooperstown for their ex-teammate and longtime friend. Ronnie’s children- Jeff, Ron Jr. and Linda- also spoke during the Fan Fest. Cubs owner Tom Ricketts decided to throw the festival to include Cubs fans in the special celebration. The Ricketts family walked around and chatted with fans throughout the day.

Hall of Fame Awards Ceremony and Parade
The Hall of Fame now holds its awards ceremony on Saturday separate from the induction itself. The Taylor G. Spink Award for meritorious contributions to baseball writing and the Ford C. Frick Award for baseball broadcasters were handed out. FOX baseball color commentator Tim McCarver accepted this year’s Frick award and presented his speech, while Bob Elliott, who has covered the Montreal Expos and now the Toronto Blue Jays for many years, became the first Canadian to win the Frick award. Three generation of St. Louis Cardinals World Series winning managers were also honored during the awards ceremony, which was held at historic Doubleday Field. Saturday evening the HOF Parade took place down Main Street as most of the living Hall of Famers made an appearance riding in the back of a Ford truck. The parade concluded with the Class of 2012 representatives- Barry Larkin and the family of Ron Santo.

The Induction
The induction ceremony took place on Sunday afternoon at Clark Sports Center in Cooperstown. Fans packed the grass with lawn chairs and blankets, camping out hours before the start of the ceremony in order to secure their spots. An estimated 18,000 were in attendance. Each Hall of Famer was introduced one by one to cheers from the crowd. Loud standing ovations were given to each Hall of Famer who was a star for the Cubs or Reds. Bud Selig read the inscription on Santo’s plaque before a video with clips of Pat Hughes remembering his late partner was played. Vicki Santo delivered a moving acceptance speech, stressing Ron’s appreciation for Cub fans and reminding the audience of her husband’s fight against diabetes and his efforts to help find a cure through the Juvenile Diabetes Research Foundation. Vicki stressed the fact that it was not a sad day, despite the fact that Ron wasn’t there to enjoy it. It was a day to celebrate Ronnie, just like he would have wanted.