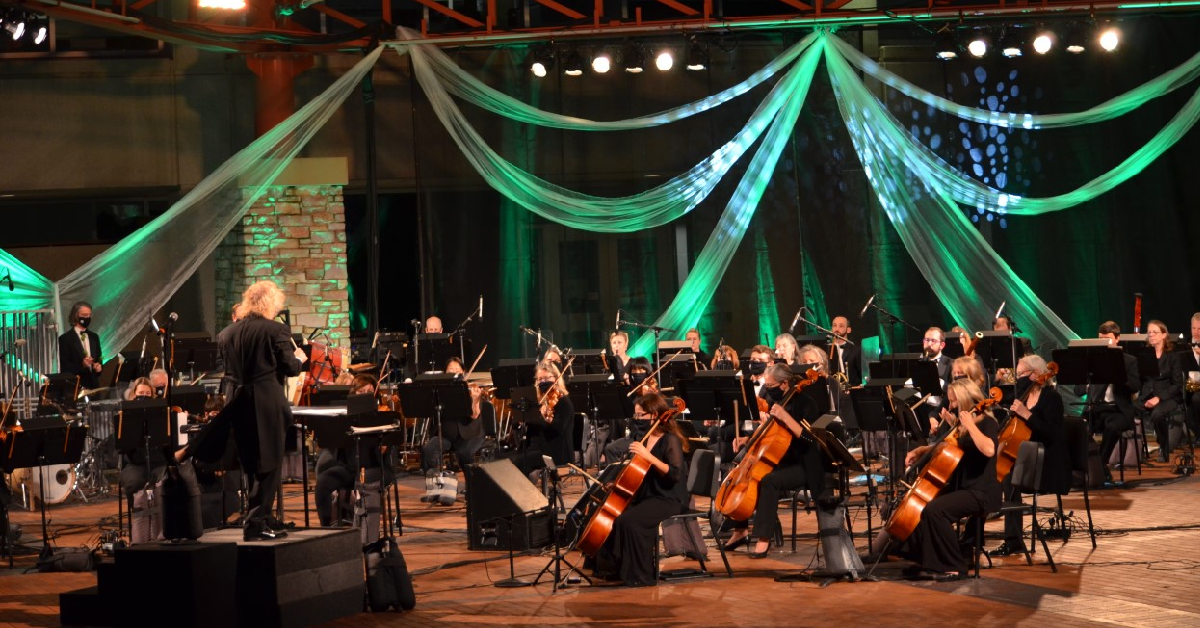 New Philharmonic, under the baton of Maestro Kirk Muspratt, opens the orchestra’s fall 2020 concert programming with “The Music of John Williams,” streaming 7:30 p.m. Saturday, Oct. 24 and 3 p.m. Sunday, Oct. 25. Music from some of Williams’ most loved cinematic scores are featured in this 95-minute concert that includes a 15-minute pre-recorded MAC chat with Maestro Muspratt at intermission. For the safety of the musicians, the concert was recorded outdoors at the McAninch Arts Center’s Lakeside Pavilion in Glen Ellyn, Ill. without an audience. This is a paid ticketed event viewable on the set performance dates only. Tickets and additional information are available at AtTheMAC.org. This is concert is made possible with generous support from the JCS Fund of the DuPage Foundation.

“Since the audience cannot come to the performance, we are bringing the performance to the audience,” said Muspratt. “What they’ll see is a full-scale, multi-camera production. What they’ll hear is nothing short of extraordinary. Ticket buyers will be provided a link where they can download the show program. They’ll be able to experience all of this from the comfort and convenience of their own home.”

With a cinematic career spanning more than six decades and honors including 24 Grammy Awards, five Academy Awards and four Golden Globe Awards, John Williams is regarded as one of the greatest American composers of his time. This thrilling concert will include selections of his music from popular films including “ET: The Extra-Terrestrial,” “Close Encounters of the Third Kind,” “Jaws,” “Raiders of the Lost Ark” and “Jurassic Park,” plus music from the “Harry Potter,” “Superman” and “Star Wars” series. Tickets for the John Williams Concert are $40 per household, and can be purchased at AtTheMAC.org. Ticket purchasers will be sent a link prior to their concert.

A special three-show subscription package is available for $99. The streaming package includes the John Williams concert, as well as “Sing-Along with the Symphony” and New Year’s Eve concerts. Subscriptions include a free subscription to West Suburban Living magazine. Anyone wishing to subscribe may email themac@cod.edu, call 630.942.3008, or order online at AtTheMAC.org.

New Philharmonic has inspired classical music enthusiasts in Chicago and the suburbs for more than 40 years. It continues to thrive with the goal to give innovative treatment to both classic compositions and modern works while striving to make the music accessible to new audiences and youth through a variety of educational efforts. Today, under the direction of Kirk Muspratt, named 2018 Conductor of the Year (Professional Orchestra) by Illinois Council of Orchestras, New Philharmonic consists of more than 60 professional musicians and traditionally performs more than a dozen concerts a year, reaching more than 7,500 from the greater Chicago area annually. New Philharmonic was recently honored with the Illinois Council of Orchestras’ 2020 ICO Award in the category Programming of the Year.