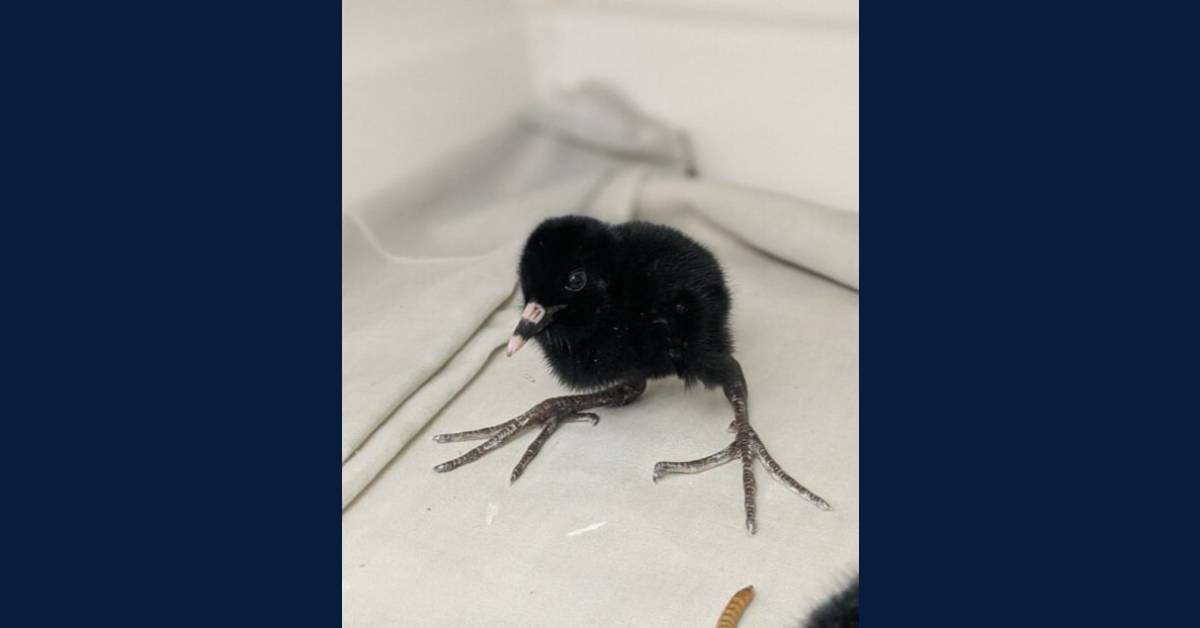 Humane Indiana Wildlife Rehabilitation Center (HIW) receives various species throughout the year in need of help. The spring’s baby season brings several hundred orphaned animals including squirrels,opossums and birds of prey, just to name a few. This year’s early summer-like weather has expanded those arrivals. Good samaritans and lovers of nature bring injured or orphaned wildlife to the experienced staff at HIW. In the Center’s 6 years of experience, the staff had never received such a young individual of an endangered species, but that all changed this summer.

On July 2nd, HIW received a call about two young chicks found in a window well in Cedar Lake, IN.

Upon further communication with the two teens who found the chicks, it was determined the chicks were actually Virginia Rails, an endangered species in the state of Indiana. “When the finders sent us a photograph of the chicks they had discovered, we were very surprised to see that they were Virginia Rails! said Nicole Harmon, Director, Humane Indiana Wildlife Center. “Not only is it rare to spot these in the wild, but to find them in a neighborhood, is almost unheard of. We immediately began taking steps at the center to prepare for their arrival and were very excited to get them into our care,” she added.

Harmon said an evaluation determined the chicks were lethargic and dehydrated upon arrival to the Center. They were placed in an incubator, rehydrated, and then offered food. The Virginia Rail is able to feed itself at a very young age, making them a semi-precocial species. The challenge for the staff was to find food appealing enough to entice the chicks to want to feed themselves. A diet of brine shrimp, blood worms, and live mealworms was offered and within hours the chicks were eating on their own. The staff also started syringe feedings every thirty minutes to ensure that they remained hydrated while they adjusted to eating these foods which are new to them.

“This particular species is difficult to locate due to their shy, secretive nature,” Harmon explained. “Virginia Rails actually leave their parents at the young age of four weeks. Not yet able to fly, they use their stealth and ability to run/hide to help protect themselves from predators. As a wading bird, marshy land with dense vegetation is the perfect habitat for youngsters to be able to hide effectively,” she described.

Due to the bird’s endangered species status, Harmon’s team was required to contact Indiana DNR to  inform them of the babies in HIW care and to report their rescue location. State researchers will track the rare species and its breeding. “We’re glad that, in our own unique way, we are able to help contribute data to area biologists,” Harmon said.

Today, the chicks are thriving at HIW and were moved to a larger enclosure late last week. “I’m extremely proud of our Wildlife Team and the professionalism and extreme care they offer to each and every animal that comes through our doors,” said Brian Fitzpatrick, CEO, Humane Indiana. “This year the wildlife staff has already received 2,358 animals in need of help,” he added.

Harmon said she and the team hope to release the Virginia Rails Friday, August 14th in the Indiana Dunes National Park, after receiving permission from National Park Superintendent, Paul Labovitz. “At six weeks old they’re weighing in at 79 grams each.  It is suggested to release between 65-95 grams and 6-8 weeks of age, so they’re quickly approaching their readiness for release,” Harmon explained.