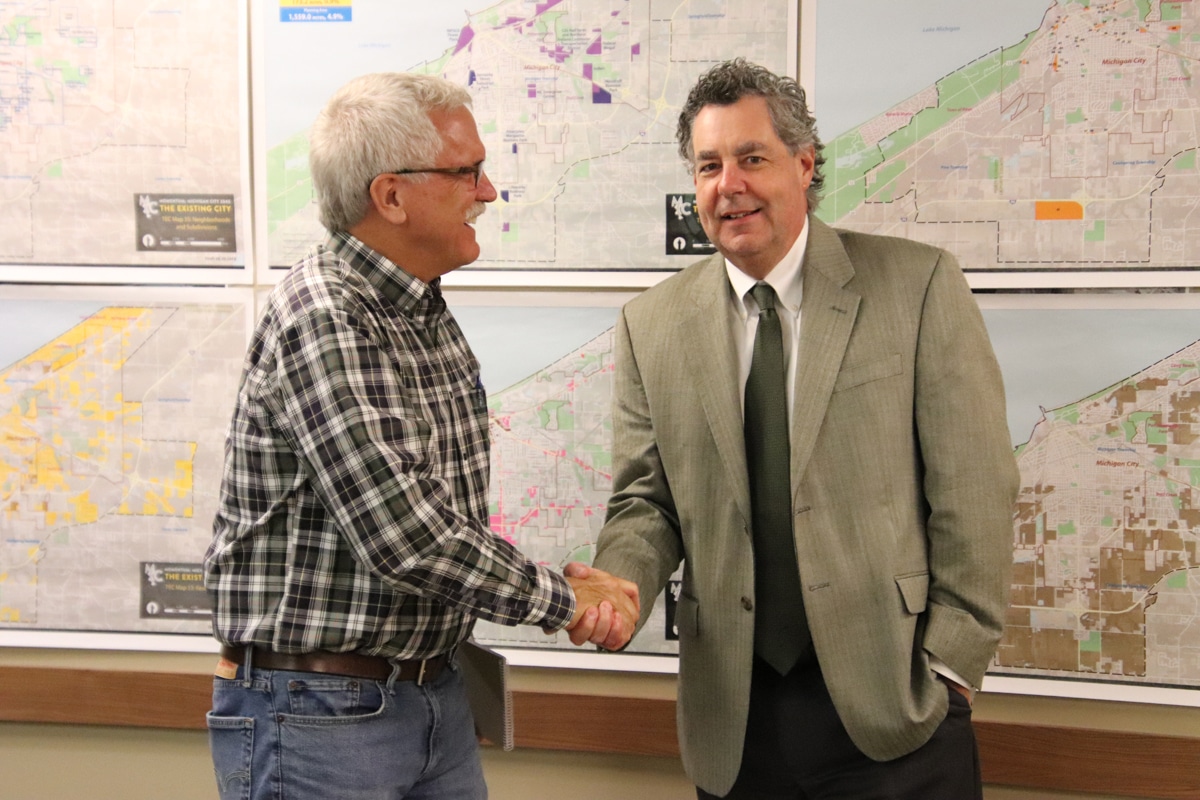 Michigan City presented The Momentum 2040 Comprehensive Plan to the public in an open house setting at the Michigan City Hall on September 17th, at 7pm. The meeting revealed the Existing and Future City Reports for the public to see in table and map format.

Clarence Hulse, Executive Director of Economic Development Corporation Michigan City, spoke about the details and planning behind the process.

“We look at different elements such as housing, parks and recreation, economic development, water and sewage...things most people don’t think about,” Hulse said. “We look at the current status of where the city is and try to look twenty years from now."

Craig Phillips, Planning Director for the city, and the Executive Director of the Redevelopment Commission, spoke about the importance of the public's input.

“We have gone through the process of developing this document to where it's at today. It’s common at the end of the process like this to gain some public input. We are here tonight in an open house format, to show the progress and answer questions,” Phillips said. “We feel very strongly that a substantial amount of public input is critical to our process."

Nancy Bausback, a retired teacher and member of the League of Women Voters, has a devoted interest in her local government and politics. She explains what can happen when there isn’t a plan regarding development in the community.

“If you don’t have a plan, you don’t grow and it’s a mess,” Bausback said. “There was a clearing of an acre’s worth of woods near Friendship Gardens, a place where people didn’t realize they couldn’t clear. Now they are now facing a fine to replace the trees,” Bausback expressed.

She believes that these meetings can prevent those types of issues and said they are in the process of making sure to pass specific rules for clearing spots in town.

Aaron Tuley, Team Leader of Planning and Landscape Architecture at Halff Associates in Houston, Texas partnered with Michigan City as the Project Manager to create the 2040 Comprehensive Planning Program.

“This is a 20 year planning program for Michigan City that anticipates all sorts of events that are coming up in the near future that can be conceivably be game changers for the community,” Tuley said.

Tuley expressed and questioned the impact of strategies to the crowd that referred to the double tracking of the South Shore Line and the new Southern Franciscan Health Complex.

“There are a whole host of different things that your community will be anticipating in the next 20 years and we need to strategize with the city on how to take full advantage of them," Tuley said.

Maps and figures displayed the comprehensive plan that illustrate the state of Michigan City now, and the estimate of what can happen in the future.

The Existing City Analyst and Report was the first phase, which consisted of about 45 maps of the community that depict the current conditions of Michigan City. The next step was the Plan, Direction, and Assumptions Phase, where the vision for the future was made alongside a mission and various strategies for the vision.

From there, the Future City report was created that includes courses of action and policies.

These projections were presented in tables and maps and included specific details such as time and place, additional planning, identified economic needs, included additional regulations or policies, and noted possible partnership opportunities.

Each attendee was handed out sticker dots, 10 small and 3 large. The large dots were to be placed on a map or table of a strategy they believed most important. The ten smaller dots were to be placed on the ones that preceded those. This gave the public an opportunity to prioritize and tell representatives what they want to see implemented over the next couple of years.

Michigan City aims to be the best it can be by incorporating its people into its developmental and planning process. The plans that are ahead for Michigan City are bright and big, follow the journey of the upcoming plans for the city at http://mc2040.com.