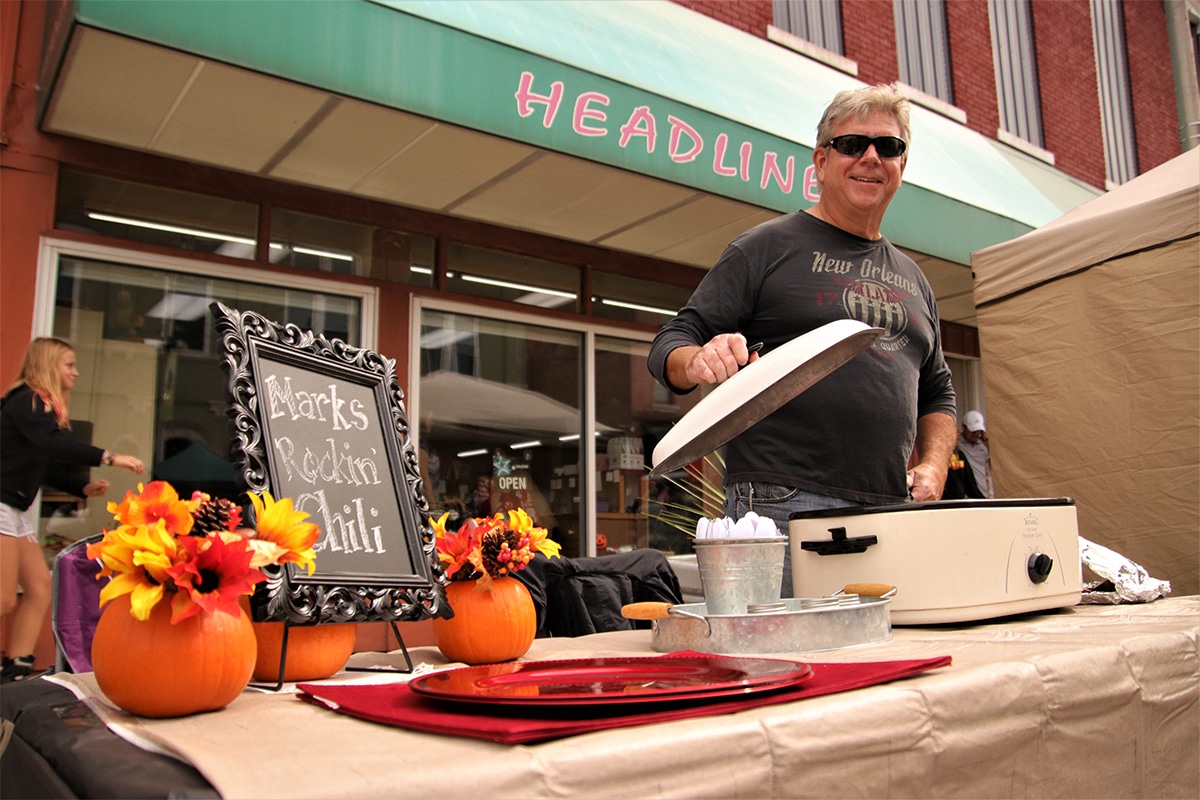 Saturday marks history for Winamac as the town celebrated their first annual Market Street Chili Festival. The fest was held and sponsored by the community’s Main Street organization, Wander Our Winamac, a group that focuses on building a vibrant downtown by providing social, commercial, and recreational opportunities for its people. Festivities invited nearby vendors, food trucks, and unique competition to the table.

The festival held a Chili Cooking Competition where attendees could sample various types of chili while walking the block. The Lil Miss and Mr. Chili Pepper Pageant was held alongside the cash prize Double Elimination Cornhole Tournament that stretched the streets. The block was full of unique Food Vendors with options like juicy corn on the cob and wood fired pizza from FireBrick Road, which sets up shop in a revamped school bus. Craft vendors and local businesses were dispersed throughout the town, providing local flavors.

INKsignia, a local tattoo shop to the area, hosted a special $50 deal for tattoos specifically chili related. Designs ranged from a pepper breathing out fire to an animated version of a member of the Red Hot Chili Peppers.

Carrie Hoffman, the Executive Chairman and Event Coordinator for Wander Our Winamac, sat in her floral shop, Opera House Floral, greeting oncoming business. She spoke about her journey as a small business in the town.

“When I opened up Opera House Floral, I noticed that a few stores were closing slowly. People were wary about the fact that some were moving away, and so forth,” Hoffman said.

Hoffman expressed that she sensed a fear in her community that their small town and others around them could be diminishing without something to bring them together. Hoffman wanted to change that, and she did so with the support and guidance of Wander Our Winamac.

“I would travel four hours to the historical and small town Madison, Indiana, who continuously held all types of festivals. That kind of engagement just draws you there,” Hoffman said.

She explained why the festival is a much needed asset to the town.

“Everyone misses and wants big get-togethers with family and friends that just create fond memories. We haven’t had a festival in a long time, and the Chili Fest has already brought a little more life into the downtown area,” Carrie said.

The festival coordinators were pleased with the large amount of vendor turnout and the community's support in a complete success of the event.

Alex Lebrija, a chili contestant, is a new member to the Winamac community, and spoke about what these types of events can offer.

“I was raised in a small town in Tennessee, and since then I have been to all different towns of all sizes,” Lebrija said. “This is what makes small towns great; coming together as a community, doing something like this, showing off a little bit, and creating friendships.”

Doug Hoffman, a member of Wander Our Winamac, stood near his chili cooking team member, who was preparing meat for his chili in a Bayou Classic Cast Iron Pot from Alabama. Hoffman is sure that the festival will bring light to many people in Winamac.

“The festival brings more people downtown and it’s what the people want in this the community. We are definitely having another one next year,” he said.

The one-day event has future aspirations of expanding, as it plans to add more unique fun, such as a baby competition, and welcome more vendors to its streets next year. If you missed out on the unique taste of Winamac, no fear! Wander Our Winamac is positive that next year’s Chili Festival will be a hit, and act as an ambassador of downtown Winamac’s growth for years to come.