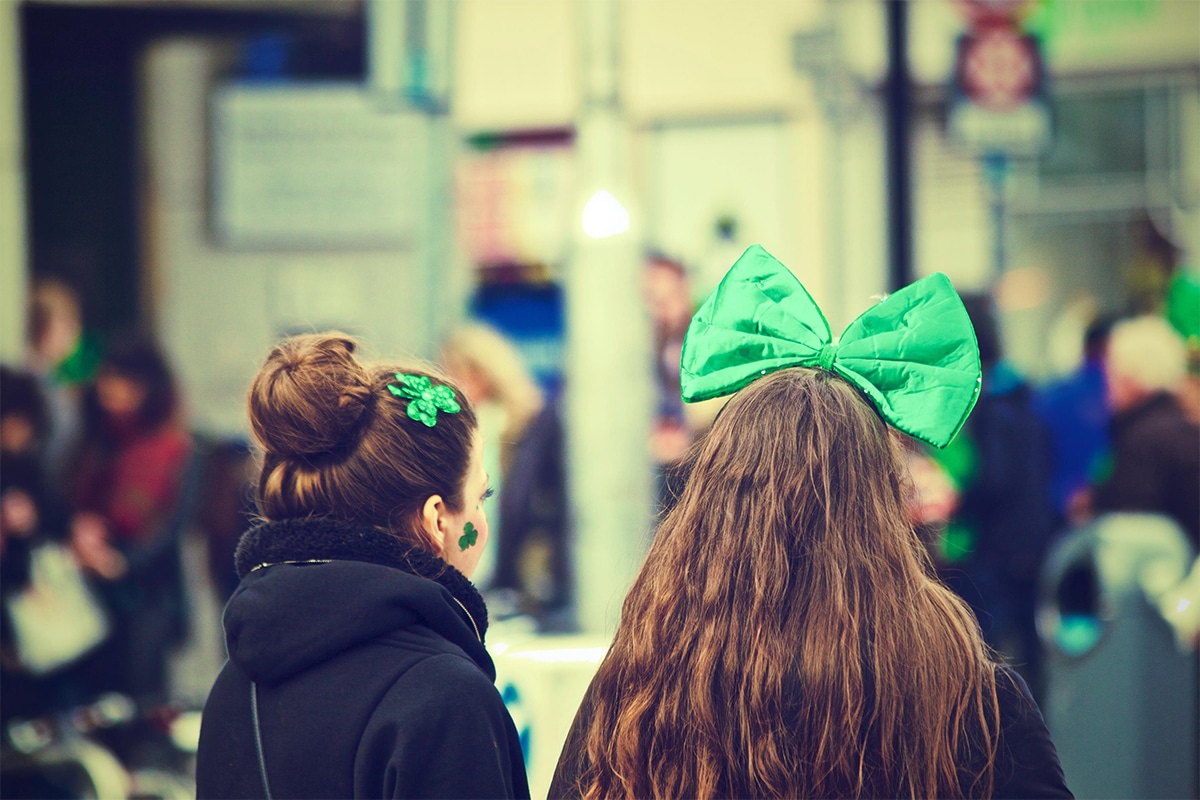 It hardly needs saying, but St. Patrick’s Day and green go together like rainbows and pots of gold. The holiday has become practically synonymous with the color, and every year, the world blindly dons their finest green attire, consumes green beverages, and watches in wonder as the Chicago River transforms into a winding emerald ribbon. The tradition is so ingrained, that we don’t even question its origins.

So, why green? We’re not wrong in assuming the color simply pays homage to all things Irish. After all, green has become just as synonymous with Ireland as it has with St. Patrick’s Day. It features in the country’s flag (green for Catholics in Ireland, orange for the Protestant population, and white in the middle to symbolize harmony between the two.) Plus, Ireland’s nickname is The Emerald Isle, reflecting its lush, vibrant landscape.

Taking into consideration the ol’ saint himself, green plays its own special role in his story. But that wasn’t always the case! Did you know that blue used to be the color associated with St. Patrick’s Day? Early depictions of St. Patrick show him wearing blue, and the official color of the Order of St. Patrick, an 18th-century era order of knights, is a sky blue shade known as “St. Patrick’s Blue.” I don’t know about you, but the idea of guzzling a blue beer just doesn’t seem as appealing as guzzling a green one…but I digress.

Green eventually superseded blue as the official color of St. Patrick and his day, most likely due to all the aforementioned reasons and because St. Patrick made use of those iconic, green shamrocks to teach people about the Holy Trinity (Father, Son, and Holy Ghost). Hence, the popularity of shamrock imagery for the holiday. Additionally, poems and ballads written during the 18th century, most famously “The Wearing of the Green,” continued to spread the importance of the color green.

The origins of the wearing of green clothing in the U.S. to celebrate St. Patrick’s Day date back to the 19th century, when waves of Irish immigrants journeyed to America searching for job opportunities, especially after the Great Famine of the 1840s-50s. The immigrants wore green and carried Irish flags alongside American flags as a show of pride for their homeland.

Setting aside historic factors, you can’t discount legendary factors when it comes to the tie between St. Patrick’s Day and the color green. A country rife with folklore, Ireland holds fast to the tradition of storytelling. The mythical creature most associated with the Irish? That would be the leprechaun, of course.

Prior to leprechauns of the Lucky Charms variety, these mischievous critters were said to originally sport red and gold jackets and pointy hats. Now that time legend has decreed green as their shade of choice, they’ll be sure to pinch you if they don’t see you wearing the color! All the more reason to stick to wearing green this St. Patrick’s Day...