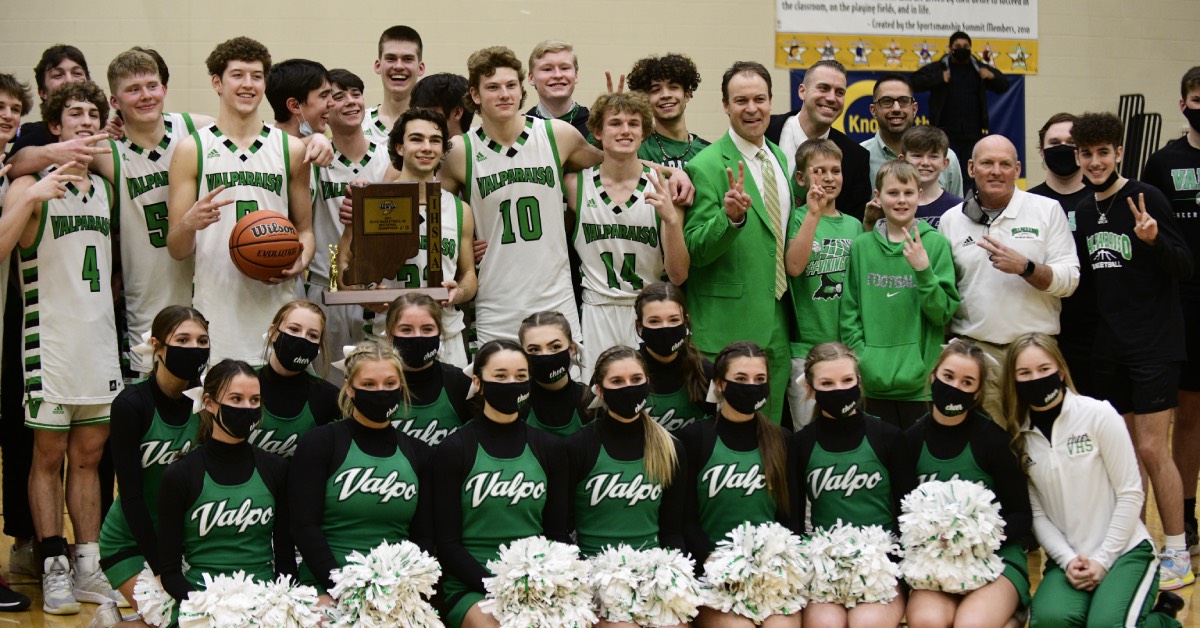 If you are a statistic follower, it appeared the Valparaiso Vikings would easily defeat the Portage Indians in the Class 4A Sectional Championships. After all, the Vikings, coached by Barak Coolman, were ranked 23rd in the State’s 4A Class. The Indians, coached by Rick Snodgrass, were ranked 93rd. The last time the two teams met-up, the Vikings came away with a solid victory. However, Portage would show Valparaiso they were not the same team the Vikings had played earlier in the season.

Before the game the Vikings’ Team Managers Alexis Belcome, Josie Bernbom, and Lexi Coberg were excited for the game. No surprise to anyone, the hardworking trio predicted the Vikings to win.

“I’m hoping to see them dunk tonight,” said Coberg. “And the boys who can’t dunk, that this is their night, especially the seniors. I want them to have that last sectionals feeling.”

Coach John Knauff felt good about the Vikings' chances but was holding some reservation.

“I just hope we play as hard as we have been,” said Knauff.

Portage came out hard and fast in the first quarter. The Vikings seemed to struggle under the pressure. An early Viking lead gained by #32 Rowland Sorrick’s successful three-point basket was cut short by #20 Kamari Slaughter who sank a three-point basket of his own putting Portage on the board. It was clear Portage was all business. The first quarter ended with only one point separating the two teams.

Second quarter was a battle of the three point baskets. Viking’s #3 Michael Flynn successfully landed a trio of three-point baskets, but all were answered when Portage’s #10 Clark Grant scored a three-point basket and #20 Slaughter captured two more of his own. The first half of the game would end like the first quarter with only one point separating the teams. The score at half time was Vikings 29, Indians 28.

The third quarter saw the majority of the points exchange for the game. It looked as if the Indians would end the quarter in the lead when #4 Breece Walls nailed a three-point buzzer beater basket leaving the Vikings ahead, once again, by one point. The score going into the fourth quarter was the Vikings 42, Indians 41.

The turning moment was when #32 Sorrick successfully sank a three-point basket for the Vikings. It was down to just a few seconds, but the Vikings held tough pulling out a Viking victory with the score of Vikings 59, Indians 53.

After the game, Valparaiso’s Coach Coolman said he was not surprised the Vikings had their work cut out.

“It’s the sectional championship. Portage was there for a reason, because they are playing well.” said Coolman. “Sometimes people fall in the trap that is going to be a blow out. We are just really proud of the fortitude and the toughness of our guys to gut it out. That’s the way we play, I am really proud of them.”

Sporting six new stitches and a shiner, #32 Rowland Sorrick was a prime example of the Viking’s fortitude and toughness. Sorrick had sustained a laceration above the eye in the night’s prior game against Crown Point at half time. He had finished the game before heading to the emergency room for stitches. He echoed his coach's thoughts about Portage.

“We knew they were on a hot streak. They weren’t the same Portage we played in the regular season,” said Sorrick. “They came out strong. We just needed to come back with that same intensity we had the entire year. This isn’t new to us, we have had tight games before. I am just glad we were able to finish it off.”

While Sorrick was thrilled for the victory, there was one moment from the game he will always remember.

“When we were down and I hit the corner three, that was so exciting. The crowd erupting was so unreal. I am so happy to be a part of this community and all of them cheering for us,” said Sorrick with a smile.

The Vikings will advance to the regional playoffs where they will face South Bend Riley on March 13.