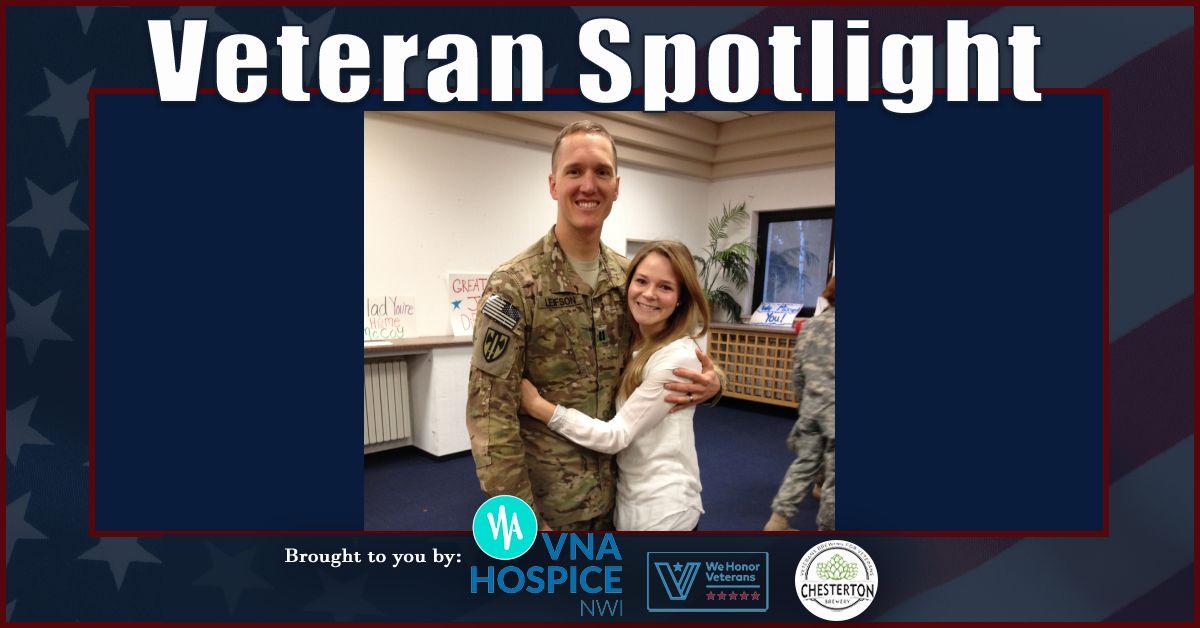 Valparaiso resident Jed Leifson said that serving in the U.S. Army as a nurse for more than a decade made him a more compassionate person and helped to ensure sweet success in his career.

Leifson was born and raised in Utah. He graduated from Westminster College in Salt Lake City, Utah with a bachelor of science degree in nursing.

“The entire time I was serving in the army, I was a nurse at different facilities,” Leifson said. “In May 2009, I started out at Brook Army Medical Center in San Antonio, Texas, then went to the 212th Combat Support Hospital in Germany for three years. While I was in Germany, I was deployed to Afghanistan. I finished up active duty at Walter Reed National Military Medical Center in Washington, D.C. working in an intensive care unit (ICU) there. When I completed active duty in June 2017, I was in the reserves for two and a half years of anesthesia school at Fort Douglas in Salt Lake and then, until May of 2022, I served as a certified registered nurse anesthetist (CRNA) at the 801st Combat Support Hospital at Fort Sheridan, Ill. It’s been a bit of a journey.”

Leifson said that one of the most valuable lessons he learned from his time spent in the military was stepping outside of himself and filling everyone else’s boots to better understand how they were feeling.

“I had a commander who had me working with a janitor one day and the hospital administrator the next,” Leifson said. “In those different positions, I was challenged to learn everyone’s role, understand it, and then lead while keeping all of them in mind.”

“My career naturally evolved from the army, to nursing, to cookies,” Leifson said. “It just made sense.”

After Leifson completed his active duty and the army reserves, he and his wife moved from Fort Sheridan to Northwest Indiana. Franchise opportunities seemed to be a flexible way his wife would be able to work outside their home and raise their children at the same time.

“We are originally from Utah, and Crumbl Cookies started out in Utah, so we had heard of it,” he said. “After two or three days of observation at her cousin’s stores in Wisconsin, we were sold. We love the energy of the store. We love the cookies. They are amazing! I love my desserts. Her cousin was really helpful in explaining the business side of things, and we decided it was something we were going to pursue.”

The Leifsons were approved to open two locations – one in Valparaiso and another in Merrillville. The Valparaiso location has been open for a few months. The Merrillville location is not built yet, but is expected to open near Lowe’s and Costco in the early summer of 2023.

“I believe my experience in the army as a nurse translates to this type of work at Crumbl Cookies,” Leifson said. “We work alongside high school and college-aged students who are trying to work out their path. It’s been a lot of fun trying to get to know them all on an individual basis and trying to help with whatever they want to do. If this is just a seasonal job where they make a few extra bucks for a couple of months, we’ve got you. We will make it happen. If it is more of a long-term career where you’re looking for management skills and experience, we will make that happen. If you want to dig into the franchise business, we can help. I love finding out what people want to get out of this work, then trying my best to make it happen. We can make sure that it is a win-win for everybody.”

Leifson said that one thing that attracted him to the Northwest Indiana area was the fact that the beach is nearby. His family also loves the outdoors and riding bikes. They also enjoy baseball and traveling around to see the many different stadiums – both major and minor league – that are in close proximity.

“We enjoy seeing new places, experiencing new foods and new cultures, and we feel like this is a great place to make it happen,” he said. “Northwest Indiana checked a lot of the boxes for what we were looking for as far as a place for us to live and work and our kids to go to school.”

“Valparaiso has a lot to offer,” Leifson said. “It's the perfect size town for us. We love having access to the city, but not being in the busyness of the city.”

Find out more about Crumbl Cookies at Crumbl.com and click on Find a Crumbl. The Valparaiso shop is located at 2310 Laporte Ave., Suite #800, Valparaiso. Call 219-386-2555 for more information.