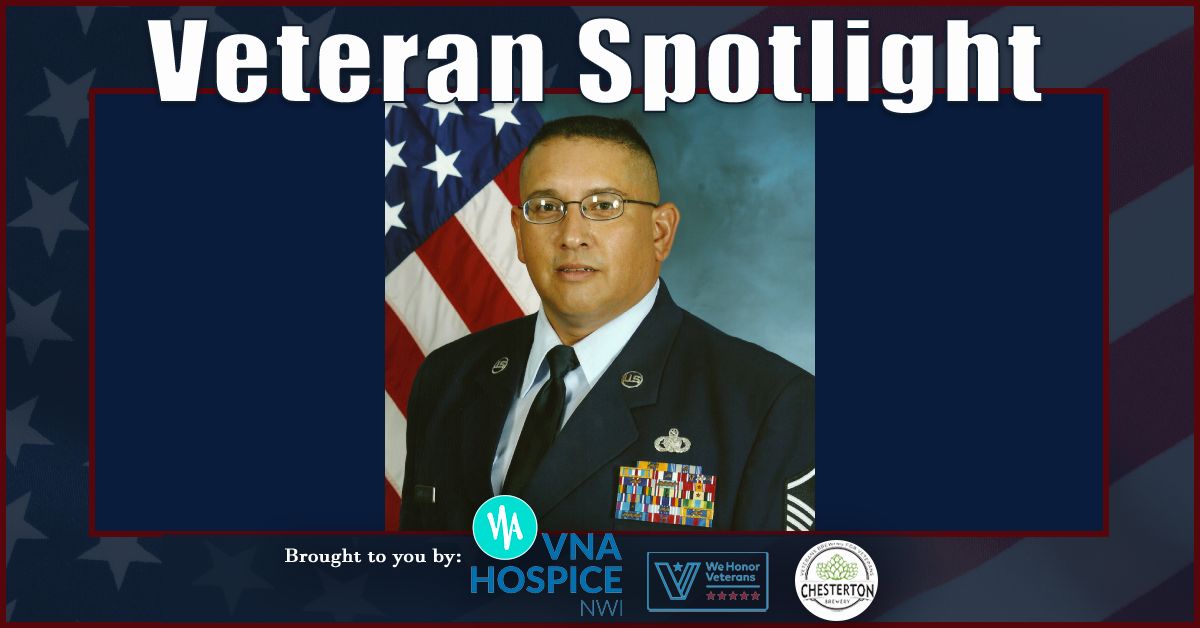 Brock Gonzales wanted to get experience outside of the confines of Northwest Indiana, so he decided to join the U.S. Air Force.

“My mentality was, ‘Okay, my dad just retired from U.S. Steel in Gary, and my brothers are getting laid off in the steel mills here. I am the youngest individual in the family and I want to get away from here. What better way to go to the military?’ I scored high enough on the ASVAB to where I could choose whatever department I wanted to go into, so I wound up being an Air Force,” said Gonzales.

Gonzales credits his interest in the Air Force to the movie “The Right Stuff,” which follows the story of Chuck Yeager breaking the sound barrier. Gonzales knew that joining the Air Force would allow him to see the aircraft from the big screen in real life, and the opportunity seemed too good to pass up.

Once Gonzales completed basic training, he went to tech school to learn how to handle supply fuels logistics and cryogenics. The training eventually led Gonzales to a managerial role with the distribution element, fuels control center, and fuels laboratory. The work was dangerous and mentally draining, but he found it interesting and thoroughly enjoyed it.

Before deploying to Turkey, however, Gonzales was sent to RAF Bentwater near Ipswich, England for a temporary duty assignment. It was during this assignment that he was able to visit London twice, as well as Cambridge, England.

"Visiting London was so surreal. I see why they survived the second World War bombings as it took forever to get above ground from riding the tubes, or the subway. Once in England, friends and I walked to Piccadilly Circus, St. Paul's Cathedral, Big Ben, Green & Hyde Park, Buckingham Palace, and then finally the Hard Rock Cafe in London," said Gonzales.

For Gonzales, getting to know the culture and unique features of the places he visited was a large part of what made his time in the service exciting.

“I went to Turkey, which was my first overseas assignment, and I loved it,” said Gonzales. “I miss the food from there. There are many times when I'm at home and I miss a good Turkish kebab. Mediterranean cuisine is outstanding, and that's some of the things you miss about being in the military. It’s not just your friends, but certain little things like that.”

Gonzales rose through the ranks as he earned experience in the service and eventually rose to become a Senior Non-commissioned Officer E-7 Master Sargeant. Shortly after his promotion, he was offered a ‘dream sheet’ to pick his top location choices for his next permanent station assignment.

Though it wasn’t his first choice, Gonzales thoroughly enjoyed his time in Guam and even deployed back there one last time before ending his career.

At Andersen Air Force Base, Gonzales was also able to command sponsor his son, who had just graduated from high school.

“I went and stayed there about a year and I command sponsored my son. He came and stayed with me and he loved it. He said it was the time of his life,” said Gonzales.

Gonzales served for a total of 25 years and appreciates the opportunities that the career provided him.

“I'm glad I went in. I obviously wanted to support and defend my country, but the cuisines overseas, the scenery, the travel, it was all things that I had never thought of when I was growing up as a kid,” said Gonzales.

His time in the military also led him to create lifelong friendships with some of the people he met overseas, and with the help of social media, Gonzales remains in contact with most of them.

“That's the beauty of it. I still have friends via Facebook or I call them. With social media now, I could not talk to someone for maybe six months and then pick up right where we left off like nothing happened,” said Gonzales.

He has met plenty of friends since his time in the service as well. He now spends his time with members of the Charles Pratt American Legion Post #94 in Valparaiso and took on a new role as commander in June. The family camaraderie between each member, no matter what branch they served in, is an important part of why Gonzales felt so drawn to the Legion.

“It's always a good time. I joined here maybe four and a half years ago. There’s a camaraderie here. It’s family. We all get along, we hug each other, we yell at each other, and we hug each other again afterward. It's really like a family,” said Gonzales.

His new mission is to bring more people into the Legion to get connected to other veterans. There are big things on the horizon for the Legion, including a popcorn fest celebration and a proposed schedule full of live music for the upcoming months.

For Gonzales, the decision to join the Air Force opened doors that would have never been possible otherwise, and he has since taken his experience in the military and used it to connect with other veterans through the Legion.

To follow along with Brock Gonzales and his work at the Legion, visit https://www.facebook.com/Charles-Pratt-American-Legion-Post-94-888045204581327.