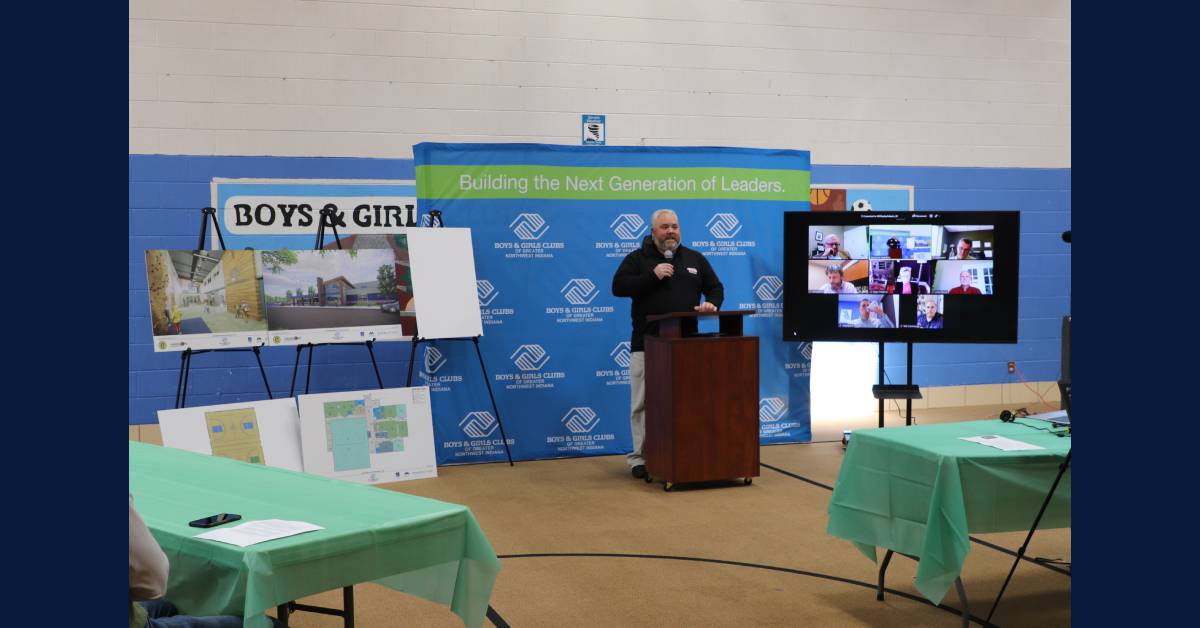 As part of Boys & Girls Clubs of Greater Northwest Indiana’s Great Futures 2025 strategic plan, Valparaiso Boys & Girls Club will be breaking ground on a new location in April, which is projected to reach completion in June 2022. The new Club will be built on an eight-acre lot on Evans Avenue and total 35,000 square feet, enabling it to house 375 kids and teens daily, compared to their current 125 kids and teens. The property will also feature 191 parking spots.

“It’s so ideally located being across from the Fairgrounds Park and also down the street from the bus barn so buses in the community will be able to drop off kids,” said Donor Relations Manager Debra Koeppen. “The location made a lot of sense the more we got into it.”

This new, $9 million facility will allow Valparaiso Boys & Girls Club to adapt to what is relevant to kids today. This will include a STEM lab, art room, teen lounge, two gymnasiums, a two-story rock-climbing wall, a digital music recording studio, and other rooms that will encourage kids and teens in their academic, creative, athletic, and social pursuits.

“When the kids came over to look at the board before everyone got here and saw that rock climbing wall, they were so excited and said, ‘Yes!’” Koeppen said.

Shive-Hattery, Tonn and Blank Construction, and Development Visions Group will serve as the architects, general contractor, and civil engineers on this project respectively. The development of this new facility resulted from an agreement between Boys & Girls Clubs of Greater Northwest Indiana and Urschel Development Corporation to make an exchange of properties.

While Valparaiso Boys & Girls Club is acquiring the eight-acre property where they will build the new facility, Urschel Development Corporation will acquire the old Club location, the historic Gardner School.

Gardner School was built in 1899, and Valparaiso Boys & Girls Club has operated within its walls since 1972. Rick Urschel, President of Urschel Development Corporation and Co-Chair of Campaign Committee for this project, said that while he does not know what they will do with Gardner School, they will preserve the history and character of this Valparaiso cornerstone.

Urschel and Co-Chair Rob Thorgren have personal ties to this project as they both attended the Club at Gardner School growing up.

“I walked into the gym, and one of the staff said, ‘Well maybe you can help with the scoreboard,’” Urschel said. “This kid named Brian taught me how to run the scoreboard, and we would do that for all the sports tournaments they would have. I formed a relationship with him – we roomed together in college and still keep in touch. That was the big take away for me as a kid; I realized there were actually other things for kids to do besides basketball.”

Thorgren is thrilled to use his abilities to increase the Club’s opportunities to reach kids and provide new opportunities for them to invest in their interests.

“I’ve been part of a lot of projects in the city, and I’ve helped some non-profits have success with their projects,” Thorgren said. “I have a lot of passion for the Boys & Girls Club, growing up here and being part of that culture for so many years. It’s really heartwarming to be asked, but also to know there are other kids in the community that are going to have these great opportunities with the new facility.”

President and CEO Ryan Smiley said that they plan to find ways to use the new facility during the day so that it does not sit empty until the Club picks up its activities after school.

“If we’ve got a $9 million facility, we want it to be used,” Smiley said. “We’re continuing those conversations with the city and parks department to see what the best use for the majority of people may be.”

Valparaiso Boys & Girls Club has $6.7 million of the $9 million needed, and the Club is looking for community support to reach the full amount. The best way to donate is through the website, which can be found at https://www.bgcgreaternwi.org/.

For those interested in making a large donation, there are also naming opportunities that allow donors to purchase a specific room to have it named in their honor and leave a personal legacy at the new Club.