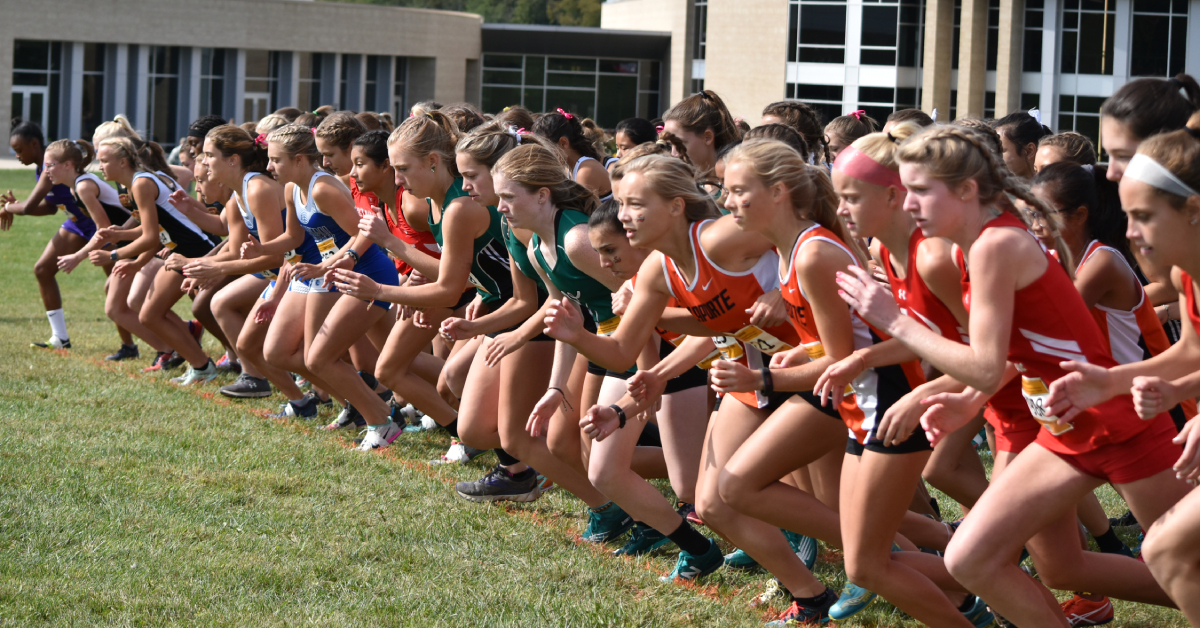 It was the first time on the Purdue Westville Campus for many of the attending athletes as Michigan City hosted the Duneland Athletic Conference (DAC) Cross Country Championship.

Portage High School coach Jay White recalled the course from a few years ago and was looking forward to the day.

"It's great weather, and a nice course," White said.  "We have never officially run out here. We did come out here to practice but it's been years since then and it's a completely different course now."

La Porte Slicers coach Corbin Slater had scoped out the course, too.

"We came for a practice Thursday to check it out. Otherwise, this is the first time racing on it," Corbin said.

The Slicers have had an exciting season so far.

"It's been fun in that we came in without high expectations from the state,” Corbin said. “We set out with little pressure to succeed and have exceeded expectations throughout the year.”

For other teams, the season had been more challenging.

"We are trying to get healthy," said Chesterton Trojans Coach Tim Ray. "We've been banged up over here so we are getting back to being healthy. I told them to go out and have fun, enjoy it. It's a tough course. We've got some great competition."

Coach Jeff Rhody of Lake Central said he loved the DAC, having developed a fondness for it after racing in it himself.

"We have been a little up and down," Rhody said.  "We are kind of young. We mostly have underclassmen in our top 12. They are doing well. They have been doing a lot of training and we’re hoping it pays off.”

Runners were excited about the weather and ready to take on the course.

"It's really good weather. Feeling really good about today's race," said Senior Christine Harris of the Valparaiso Vikings. She has been running since her Sophomore year.

Jack Acton of the Vikings was gunning to take out the Crown Point Bulldogs.

"We are hoping to come up with a dub," Acton said.  "We have a good team, and a good back {end} pack so we are hoping we can swallow up the back half of Crown Point."

Freshman Tatum Bumgardner of the Crown Point Bulldogs was feeling a little nervous. She reflected on her love of the sport before the race.

"I love the courses because there is always something new,” Bumgardner said.  "I just work on it to get better. My favorite memory is making friends this year and running on Culver's course. We slipped in the mud and fell on our faces. It was fun because I had never been to any races where there was mud.”

After the varsity runs, Coach Mike Liss of Michigan City was feeling good about the day and his team's performance.

"With what we have as far as talent, it definitely got crushed by the heart of my team,” Liss said. “We raced the best we could, we represented ourselves and Michigan City the best we could and I'm proud of that."

Cross country runners are rarely satisfied and always hungry to break their personal best.  Damian Albisu of the Michigan City Wolves was no exception.

"I feel like I could have done better," Albisu said.

Still, he said enjoyed running on the course.

"The course was hilly but it was fast."

Coach Liss was also impressed with the course.

"I thought the course was beautiful. The weather was wonderful. Purdue Northwest is a really nice place to host a meet," Liss said.

Not surprisingly it was an exciting day in the DAC conference.

Acton's wish to topple the Bulldogs came true as not only did Acton take third but the Boys Valpo Viking edged out Crown Point to win the Championship overall. The Trojans took third overall and the Slicers took fourth. Genesio Christofanelli of the Bulldogs retained his DAC Championship title once again taking first.

For the Girls varsity, it was a tight race with only six points separating the top four teams. The second and third were tied with the placement of the sixth runner for each team being the tiebreaker. Lake Central took first, Valparaiso was second, Crown Point third, and the Trojans fourth.