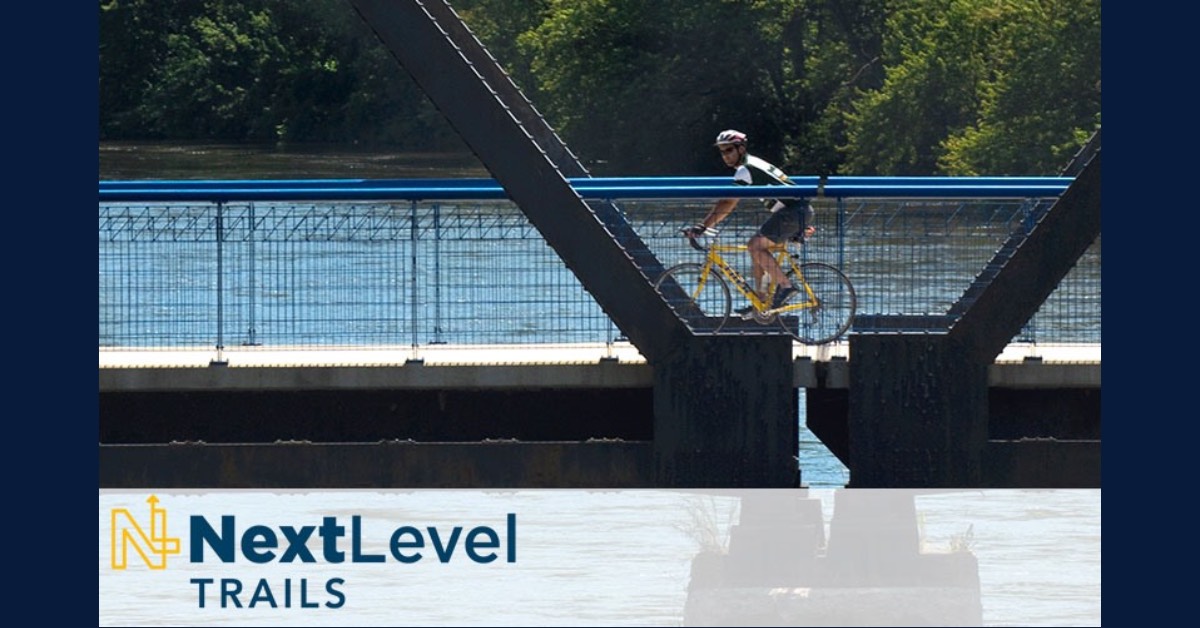 At the beginning of March, Governor Eric Holcomb and Indiana Department of Natural Resources (DNR) Director Dan Bortner shared the exciting word that 18 Indiana communities would receive a combined total of nearly $30 million to fund the trail grants they applied for. Among these communities whose projects were approved through the second round of Next Level Trails were three deserving Region cities: Crown Point, Portage and Valparaiso.

These three cities will establish a combined 5.17 miles of new trails, adding new areas for outdoor exercise and getting one step closer to connecting all Region cities via trail routes.

There is plenty to look forward to as a resident of Northwest Indiana, whether your excitement for these soon-to-be developed trails is to have a new area to walk or run, or to use the trails to bike to work, or even hop on a trail to walk to your favorite restaurant or shopping spot.

In the City of Crown Point, leaders are ready to add two segments of trail, the first of which will follow the Pennsylvania Railroad corridor. After submitting their application to the Next Level Trails Project, the City of Crown Point was thrilled to have received the exact amount of $2,984,252 that they requested to complete their project.

Mayor David Uran reflected on the city’s excitement and gratitude for the Next Level Trails grant, emphasizing how these new trails will connect to other cities’ existing pathways.

“The plan is to create three local trail segments throughout the city, but they’re also regional connectors,” said Uran. “The first segment is an extension of the Pennsy Trail, and that is going to connect right off of our existing Erie Lackawanna Trail that goes northwest towards Schererville.”

During the first round of grants distributed to Indiana communities through Next Level Trails, the Town of Schererville received the necessary funding to create the first segment of the Pennsy Trail that runs from Rohrman Park in Schererville towards Crown Point. Once the City of Crown Point has completed their 1.2-mile segment of this same trail, which will start in Schererville and connect to Crown Point’s existing Erie Lackawanna Trail, the two cities will share a joint trail for community members to enjoy.

In addition to this connection to the Pennsy Trail, the city also plans to construct their 1.64-mile section of the Veteran’s Memorial Trail that will run through the center of the City of Crown Point down to the Town of Hebron, bringing this new project’s total to 2.84 miles of new trails.

Above all, Mayor Uran is looking forward to seeing people in the community continue to experience the health benefits awarded by having safe, accessible trails right in your neighborhood.

“We’re really excited that the state worked with the DNR to create these programs for all the communities throughout Indiana as they saw the importance of connectability and giving people activities to do outdoors,” said Uran. “With restrictions limiting things to do, people were able to hop on the trails and go for a run or a bike ride and keep all rules like social distancing maintained, but also keep up on their health and welfare.”

On a national scale, the City of Crown Point’s project is just one part contributing to the Great American Rail-Trail route, a 12-state trail linking system that intends to connect from Washington, D.C. to Washington State.

“The beautiful thing is we’re going to start connecting. We keep doing this and people are going to be able to ride many, many places and stay on the trail,” said Lynch. “There were only three entities in the Region that got it, and I’m just tickled to death that [Portage] was one of them because it’s going to allow us to do almost a mile of trails.”

After receiving approval and $2,549,300 for their Marquette Greenway project, the City of Portage is ecstatic to construct 0.88 miles of asphalt trail stretching from Portage to Burns Harbor.

This project will successfully close the gap that exists in the Marquette Greenway system and move the city one step closer to the larger effort of connecting Chicago to New Buffalo, Michigan through Northwest Indiana communities located on Lake Michigan like Burns Harbor.

Mayor Lynch discussed what this means for residents of Portage, community members across Northwest Indiana, and beyond who will enjoy the perks of these well-developed trails.

“It’s not just for Portage, it connects us to other cities and towns,” said Lynch. “You see people on the Prairie Duneland Trail, for example, who don’t live here at all; they’re coming from another city and traversing through our town and I absolutely love that. I think Portage has the capability of having a lot of that, I know people who ride miles on those trails.”

In addition tosharing her praise for Governor Holcomb and Dan Bortner, Mayor Lynch also detailed her appreciation for Mitch Barloga, Board President of the Friends of the Veterans Memorial Parkway, Inc.

“A huge thank you to Mitch Barloga,who is the trail czar,” said Lynch. “If it wasn’t for him, we wouldn’t have these trails in the first place; he’s been very vigilant in fighting to get these pieces connected. I have to say that I think he was probably in there pitching for us because he knows the value of these connections.”

The City of Valparaiso plans to use their Next Level Trains Grant to add 1.45 miles of concrete trail to fill gaps within the city’s trail system, including the south side of Vale Park Road and the west side of Froberg Road. These new linkages will create a smooth pathway through neighborhoods located near the high school and Foundation Meadows Park on Campbell Street.

Valparaiso Parks Department Executive Director John Seibert shared his appreciation for the new trails, highlighting the kind of teamwork that projects like these require.

“Grants like Next Level Trails are not possible without collaboration and partnerships, and we are continually grateful for this spirit of cooperation that creates such good outcomes,” said Seibert.

As the COVID-19 pandemic continues, the new linkage in Valparaiso is set to be another great spot for community members to enjoy outdoor exercise while maintaining social distancing guidelines.

“By any measure, Valparaiso residents of all ages and backgrounds support and use the growing network of pathways in our community,” said Seibert.

To find more information about these three exciting projects happening in Crown Point, Portage and Valparaiso, you can visit the State of Indiana’s Department of Natural Resources website herefor details on Next Level Trails.