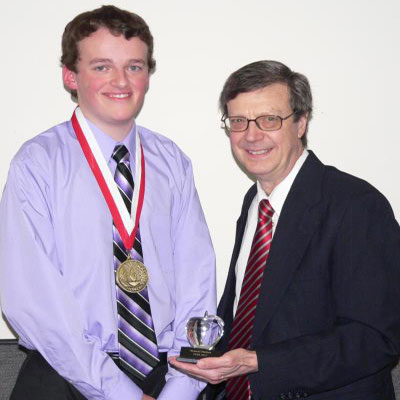 On Wednesday night, some of Portage High School’s finest students were honored during the annual ACES Banquet at Woodland Park.  ACES is an acronym that stands for Academic Champions Excelling in School.

Each year, the top academic students from the graduating senior class, based on grade point average, are honored at the banquet.  They are permitted to select one educator who has made an impact on them to accompany them.  Each selected teacher takes home a coveted glass apple to display on his or her desk.  This year, 31 students attended the event along with their teachers and parents.

Principal Caren Swickard hosted the presentation of awards with assistant principal Andrew Halachak.  Board of Trustees president Glenda Owens and Superintendent Michael Berta both spoke about the impact that these students have made on PHS, the community and the world.

The first student recognized was Alex Acosta, accompanied by Lynn Wilson.  Acosta is the National Honor Society president, a member of diversity club and involved in Natural Helpers, school plays and various productions.  Wilson is a career and technology education teacher at PHS.

“Even though Mr. Swindle never taught one of my classes, he taught me a lot about life.  He is a great coach and an awesome teacher,” Anderson said.

“Being an educator, there are times you encounter young adults and you know immediately that not only will this child do great things for themselves and all those around them, but they will also change you too.  Abby has been that young adult for me,” Isakson said.

Heidi Bilderback went back to her early schooling days when making her selection.  She shared her evening with Betty Turley, a fifth grade teacher at Myers Elementary.

Legendary history teacher Robert Parker has become a fixture at this event each year.  His desk is lined with apples that he has earned over the course of his teaching career.  This year, Trent Doud was the student to keep Parker’s ACES streak intact.  Doug described Parker as an unforgettable person, a teacher and a friend.

Sarah Davies, who is set to attend Valparaiso University, brought Tami Kepshire to the event with her.

“What has impressed me the most about Sarah is her good heart and selflessness,” Kepshire said.

Click here to view the full photo gallery from ACES 2011!