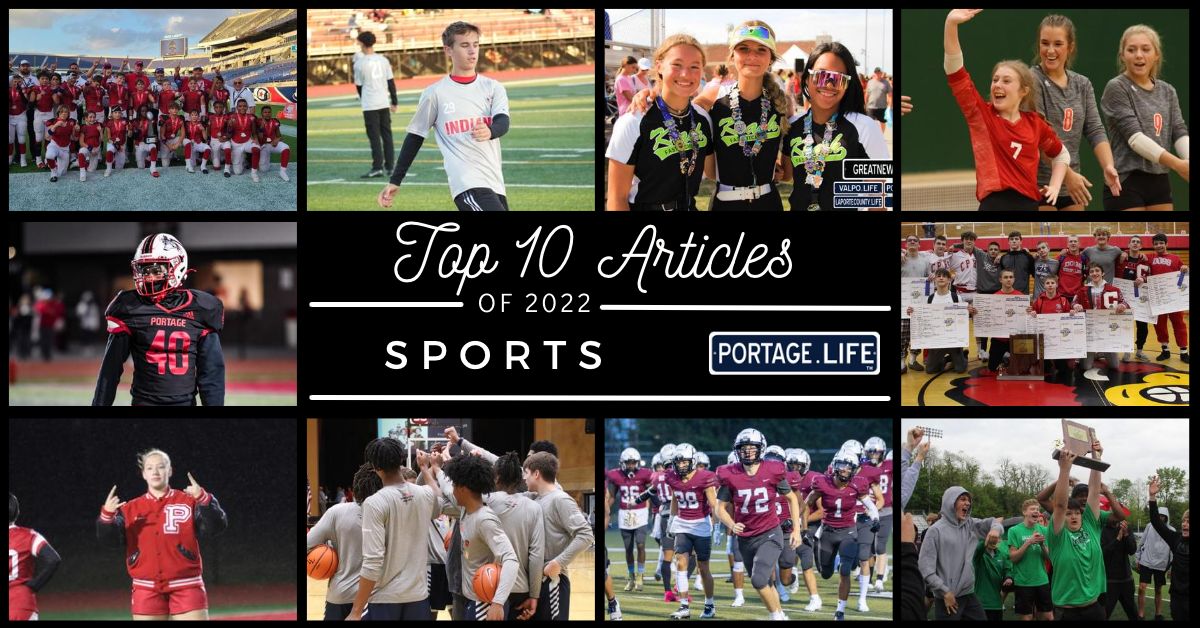 Football, basketball, volleyball, golf, soccer, cross country, gymnastics, wrestling, swimming, track & field, and more filled our feeds this past year, featuring all the good news about our Region athletes in their respective sports. There is so much talent to go around in our area, and we had a blast attending games, matches, meets, and more to help others see the action from a unique perspective.

Whether it was state championships, basketball invitationals, gymnastics sectionals, regional tournaments, new clubs, or anything in between, we shared it all in 2022 on behalf of the high schools and colleges that make our Region proud.

In no particular order, here are the top 10 sports articles on Portage.Life to recap the good news in 2022!

The City of La Porte kicks off day one of the U.S. Marines NIBC La Porte Invitational

On January 6, the City of La Porte welcomed local fans and elite prep basketball teams from around the nation for day one of the U.S. Marines NIBC La Porte Invitational hosted at the La Porte Civic Auditorium. This was the inaugural kick off for the La Porte NIBC Series that saw 22 of ESPN’s Top 100 recruits for the Class of 2022 as well as the home team – the La Lumiere Lakers – take the court.

Originally scheduled to start the series, La Lumiere’s contest against the Legacy Early College (S.C.) Lions was moved to 2 p.m. after travel conditions forced Legacy Early College to arrive late the night of January 5. Despite the adversity, both teams stormed the court to provide fans with a fast-paced, high-flying basketball game.

To some, football is merely a game. For the Arnett family, it is a way of life. It all started with Jack Arnett getting involved on the original Board of Directors for the La Porte Pop Warner Association when it was first established.

After serving time on the Board of Directors, Jack Arnett went into administration at the league level and served as the President of the Northern Indiana Pop Warner League for 20 years. Finishing off his strong resume in Pop Warner, Jack Arnett has been the Regional Director for Mid America Pop Warner which includes 11 states across the Midwest.

Crown Point Wrestling continued their dominant run for a state title on Saturday, winning the East Chicago Semi-State Tournament and sending 11 of their wrestlers to the State Championship next weekend.

The Bulldogs topped the team scoreboard with 253 points. The next highest school, Penn, posted a total of 106. Six Bulldogs also claimed individual semi-state titles, including Jesse Mendez who is seeking his fourth straight individual State Championship - though a team championship has eluded Crown Point during his tenure.

“Team sports bring people together” – that is the simple idea Special Olympics cites as one of the main motives for their Unified Sports initiative, which joins people with and without intellectual disabilities together on the same team.

The Indiana High School Athletic Association recognizes two categories of Unified Sports – Flag Football in the fall, and Track & Field in the spring. In both of these sports, teams participate in a full season of games and meets, culminating in a state tournament. The competitors get to bond through training, competition, and build a camaraderie that is often unavailable to students with disabilities who rarely play on their school teams.

Opening day consisted of teams, parents, and supporters coming together from all over the midwest to take part in, or spectate a skills competition, as well as DJ entertainment, pin trading, and vendors including World Series Apparel and Diamond Sport Gear.

September 17 was a big night for Calumet College of St. Joseph (CCSJ). For the first time in school history, CCSJ played a college football game under the Saturday night lights. The night marked the inaugural season of CCSJ’s Sprint Football team, and the completion of building a college football program from the ground up.

Sprint Football is the same as college football but with one major difference, there is a 178 pound weight limit on the players.

Find all the photos from the game here.

The Crown Point Bulldogs defeated the Portage Indians in straight sets on Saturday night, winning the matchup 3-0 and claiming the Sectional Championship.

They’ll continue their playoff run next Saturday at Regionals hosted at La Porte High School, beginning with a Semi-Final match against Lake Central.

Find all the photos from the match-up here!

The Chesterton Trojans defeated the Portage Indians 9-0 on Thursday evening at the Portage Girls Soccer Sectional Semi-Final. They move on to face the Crown Point Bulldogs this Saturday at 2 p.m.

Find all the photos from the match-up here!