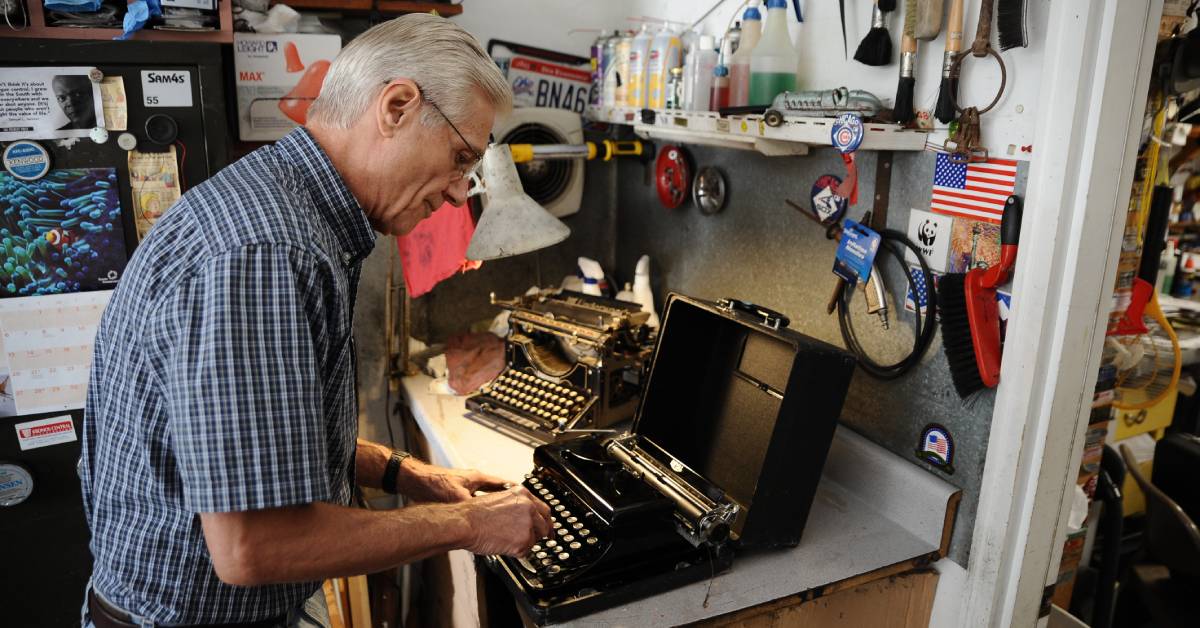 The sound they make rings a bell in our collective memories. The familiar clackety-THWACK clackety-THWACK as fingers jab intently at mechanical keys. Manual typewriters, machines that were once a fixture in homes, offices and classrooms, had all but disappeared in the early days after the rise of personal computers and the internet, but today they’re enjoying a bit of a renaissance due to a dedicated group of collectors, and—perhaps ironically—the same internet that seemingly had ushered in their premature demise just a few short decades earlier.

In the later part of the 20th century, typewriters were the “go-to” technology for putting words to paper quickly and easily. Some say that the age of the typewriter even revolutionized the novel industry as we know it, allowing writers, who previously had to write entire manuscripts by hand, to suddenly crank out short stories and novels in comparatively record times.

By the mid-1980s, a new device called the personal computer was introduced, and the industry was turned on its ear. People abandoned their clanky, janky old typewriters in favor of these new-fangled electronic devices, machines that allowed them to write more even faster and edit on the go without having to use White-Out (remember that stuff?) or re-type the entire page.

And so, those classic machines were stuffed back into their carrying cases and tossed in the closet, the attic, or even out in the garage. Many were donated to thrift shops. Others were thrown out with the trash. Still, others were simply stashed away somewhere and forgotten entirely.

But there was an unforeseen problem for those who bought computers to write on—more often than not, they’re not using them to actually write. Sure, computers are extremely versatile, capable machines, perhaps a bit too versatile and capable. With the internet, and the quick and easy access it provides with social media and websites around the globe, it’s become difficult for budding novelists and other writers to actually do the thing they set out to do without being distracted by pop-up ads, emails, and more.

Sometimes, it just might be best to step back, unplug and rewind. As the saying goes, “everything old is new again.”

Much like the renewed interest in vinyl records among audio enthusiasts, or the recent popularity of film cameras among photographers, typewriters seem to be making a bit of a comeback. If you pay attention, you can often spot them in the background in television and the movies, from Mad Men to John Wick.

Collectors and enthusiasts send their treasured machines to some of the relatively few typewriter repair stores still in existence. Places like Gramercy Typewriter Company in New York, Mesa Typewriter Exchange in Arizona, or Cambridge Typewriter Company, among others. Some even make an annual pilgrimage to “Herman’s,” their affectionate nickname for the annual gathering at Herman Price’s one-of-a-kind Chestnut Ridge Typewriter Museum, located in West Virginia. The event was once just a gathering of a few friends, but has since ballooned into an event that now draws over a hundred each year.

And there are champions of the cause, such as Richard Polt, author of The Typewriter Revolution: A Typist’s Companion for the 21st Century.

“The revolution will be typewritten,” the piece declares.

They have a strong online presence as well, with numerous Facebook groups, as well as the “Typosphere,” an ad-hoc collection of typewriter resources, blogs, links and other ephemera.

Al Stuckey runs Crown Point Office Machines, the one-man shop he’s been operating out of a garage attached to his home in Crown Point, Indiana since 1994. Stuckey said he fixes more manual typewriters now than he did when he first started in the business back in the ‘70s

“People were throwing these things away,” Stuckey said. “Manuals were fading out. People were switching over to the electrics that were becoming popular at the time.”

“When they act up from time to time, I like to remind them I may not be a ‘computer guy,’ but I do own a hammer and I will win in the end,” he joked.

Stuckey said that one of his favorite typewriters in the Underwood No. 5.

“They were first made during World War I,” Stuckey said. “When World War II started, there was of course a metal shortage, since all available metal had to be reserved for the war. But people still needed typewriters, and those Underwood Model 5s were built so well that they became the machine of choice, even 20 years after they first came out.”

Stuckey said that he’s a bit surprised at the renewed popularity of manual typewriters.

“For me, it all started a few years ago. There was a movie about an old movie that featured a character who used an old portable typewriter,” he said. “Kids saw the movie and they wanted one of those things, so suddenly, I had parents and grandparents bringing in these old machines that they’d dug out of the basement or found at a garage sale, asking if I could fix then for their kids.”

“That went on for a few years,” he continued. “Especially around Christmas, when I always seem to get twenty to thirty machines dropped off for repair before they can be given out as Christmas gifts. The general amount of interest in them has remained high.”

It’s not just kids and teens, though. Typewriters are used as props in movies. They are used as decorations at weddings, and to lend character to shelves in offices. Some professional writers still use them for their novels. Cormac McCarthy, author of No Country for Old Men and many other novels and short stories, has rather famously used the same model typewriter over his whole career—an Olivetti Lettera 32 that he bought for $50 from a Knoxville, Tennessee pawn shop back in 1963. He used that beloved Lettera to churn out an estimated five million words during his career. It received no more maintenance than to have the dust occasionally blown out with a gas station air hose before finally being auctioned off at Christie’s Auction House for a whopping $254,500 in 2009.

That typewriter was promptly replaced with another Olivetti Lettera 32, as a gift from a friend who purchased it for less than $20.

Perhaps the most famous typewriter collector may be actor Tom Hanks, who admits to having collected more than a hundred typewriters over the years and even published a book, Uncommon Type, a collection of short stories, each one featuring a typewriter in some way or another.

“I've always been tangentially interested in typewriters, as my father used one—an Underwood No. 5—for business purposes for as long as I can remember,” McDaniel said. “I use them for writing, as I find handwriting to be too slow, and computer writing to be too distracting.”

McDaniel says his collection numbers roughly 50 machines, many of which are in rotation as classroom machines in his teaching job.

“I let the students use them fairly regularly,” he said. “Anecdotal evidence from other teacher/collectors is that they improve sentence fluency and spelling accuracy, and I've found that as well.”

“I enjoy collecting typewriters because each and everyone is different,” McDaniel said. “Even two identical machines that are similar in age have completely different traits. I have two Olympia desktop machines that are identical and are, in fact, about 400 numbers apart according to the serial number. They're as close to twins as possible—one has a loud bell, the other has a quieter one. One has a flying A, the other has a crooked E. After years of use and ownership, they all have their quirks.”

“Each keystroke or each shutter actuation produces something tangible. A letter on a piece of paper, an exposure on a roll of film. There's something special about making something that cannot be undone, and I find that appealing.” Old typewriters may be gaining new fans that’s true, but for others—for those dedicated souls who gather at “type-ins” around the country, crowding into coffee shops and bookstores with their faithful machines to swap stories and, occasionally, machines themselves—they never really left.