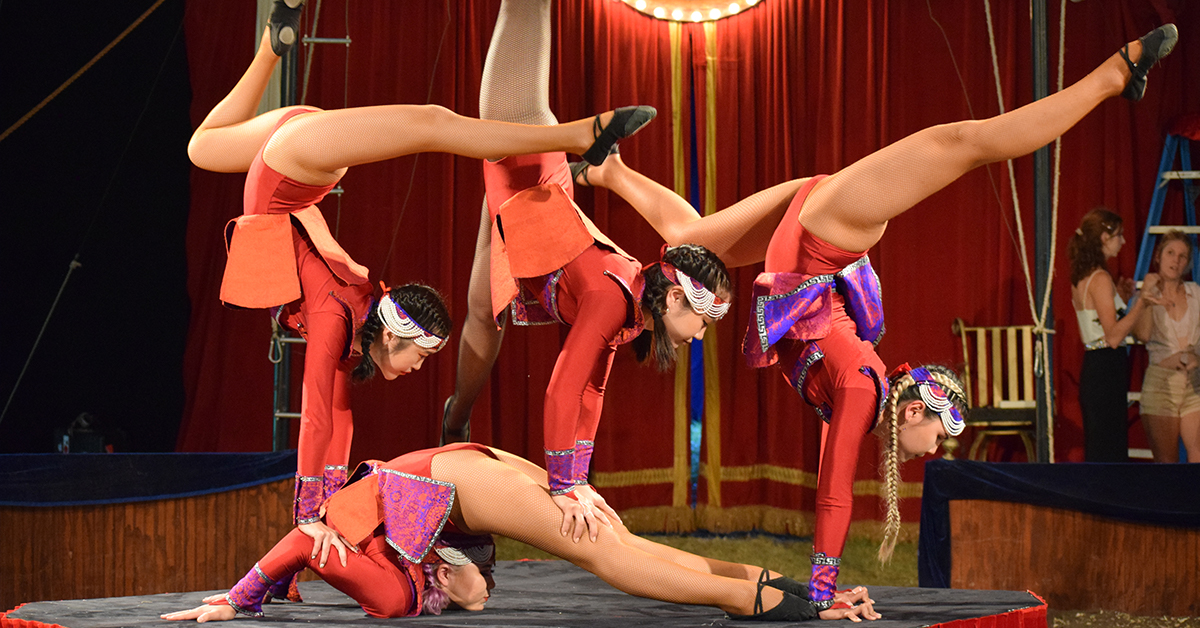 The 177th annual Zoppé Circus premieres with a soft opening TONIGHT, July 25, starring a predominantly female-identifying cast from around the world. The Empowering Women theme of this tour focuses on the strength, power and beauty of women taking over the male encompassed world of the circus. The show will feature acts including a Cossack horse troupe; a multi-generational trapeze troupe; the Bator, Mongolia-based Sky Girls contortionist group; a tight-wire dancing act, and Nino the Clown.

Giovanni Zoppé, the producer of the Zoppé Circus and Nino the Clown himself, is a seventh generation circus performer who has been in the ring since he was six months old. With the 175th anniversary of the Zoppé Circus performing two years ago, he decided that he wanted to do something a little different this year by creating a 95-percent female cast and hiring Zoppé’s first ever female ringmaster.

“This year, we decided to celebrate the strength, power, and beauty of women because we’re coming into a new time and era where we really need to work together and be united,” Zoppé said. “Equality has always been important to us in the circus community and we’re all on the same team, so why can’t we work together as though we are on the same team?”

Zoppé’s own grandmother inspired him to create the theme of Empowering Women for this tour. “La Nonna” means grandmother and the power of beauty and elegance in Italian, so he decided to name the show after her as a tribute to women everywhere.

Zoppé’s first female ringmaster, Aimee Klein, started her career as a musician and actress in the circus only a few years ago. When Zoppé called her up to be the ringmaster for this year’s tour, she couldn’t say no.

“The enormity of it hits me in waves,” Klein said. “As women, we feel like we have to shrink sometimes and I think the whole world suffers as a result, so if we’re allowed to let our light shine, it’ll illuminate the whole world.”

The Cossack horse troupe including Ariana Machado, Emily Kamp, Veronica Painter, and Lindsay Barrack, had a very similar response regarding women in the circus.

“Women play a different role than they used to back when the circus originated and it’s nice to see a bunch of women doing these powerful acts,” Machado said. “Cossack riding is typically male dominated, so it’s really awesome to see an all female troupe pulling some pretty awesome tricks.”

The Zoppé Circus just goes to show that women can perform the same type of acts men do, both in the circus and in many male dominated industries. That’s why the theme of this year’s circus is so important, said Machado.

Empowering females is not the only fascinating story behind this year’s Zoppé Circus—all of the performers hail from different places across the country and around the world. The Santos family, performing on the trapeze, has been in the circus for five generations, originating in Mexico. The troupe includes Denisse Santos, her mother Araceli Onofre, and her little sisters Alese and Alice.

“Since I was born into the circus world, my mother taught me everything I know,” Santos said. “I had the choice and I decided to stay with my parents in the circus, and now my little sisters are getting involved and it’s really exciting.”

The Santos family has been performing throughout the US and Canada in several different shows, and this is their first time touring with Zoppé. The same is true for the Mongolian contortionist troupe, who are visiting America for the first time. The troupe of five—including teacher Bolor-Erpene and four contortionists Namuun, Sunjidmaa, Otgonsuren, and Pureudulam—have been touring together for only a year, but have been involved in the circus for eight to 12 years and have traveled across the world to places like Turkey, Spain, Sweden, and China.

Then there’s Molly Plunk, the tight-wire dancing performer who has been traveling with Zoppé for nearly 10 years. Initially cast as a clown, once she saw the Zoppé Circus for the first time, she knew she wanted to perform with them for the rest of her life.

“I am so honored to be a part of this show,” Plunk said, “and excited to be in this cast with all of these beautiful women.”

Guests can receive $5.00 off of their purchase with the code CIRCUS. This show is sure to be a blast for the entire family—get your tickets at www.zoppe.net/portage!

Lakeshore Camp Resort will be open to the public during this time, so don’t let the entry gate fool you! If asked, simply say you are there for the circus and they will direct you. The resort is located at 5300 Old Porter Rd., Portage, IN 46368.