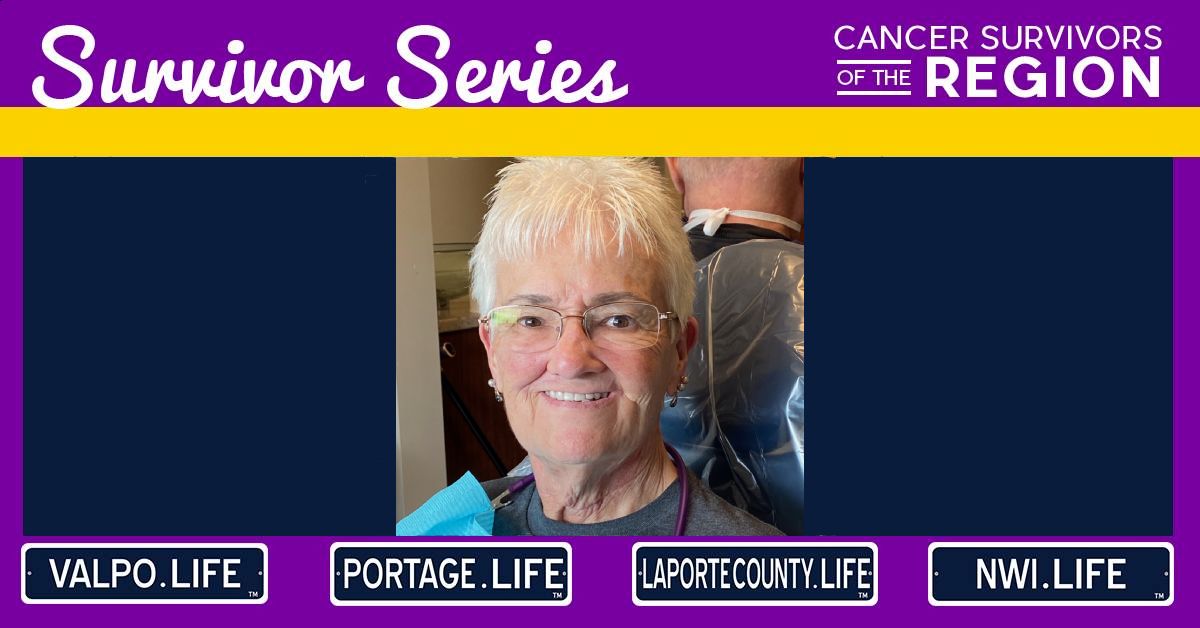 Marsha Henson documents important dates, notes from doctor’s visits, and notes from her cancer treatments in various notebooks and calendars she has kept since her diagnosis in 2017. She recently flipped through them for the first time in a couple years, surprised at how much she had forgotten from her journey.

“I’m glad I kept these notebooks,” Henson said. “It was refreshing to remember what I had been through and to see my perspective during that time.”

Born and raised in Iowa, Henson was always close to her parents and siblings, a value she carried with her as she had her own family years later. After coming to Indiana, Henson married and became stepmother to five children, then later became a grandmother and a great-grandmother.

“My family has been my life,” she said. “That helped me to make decisions on what to do when I was diagnosed."

In 2017, Henson, by then in her 70s, was diagnosed with a rare form of cancer of the mouth, a diagnosis that came as a shock for Henson and her doctors.

“In 1996, I was diagnosed with an auto-immune disease called lichen planus that affected my mouth and the gums along the teeth in my upper left jaw, but it never progressed from there,” Henson said. “But then, 20 years later in October of 2017, I had a sore spot form in my mouth that wouldn’t go away—it was almost like I had burned the roof of my mouth. It was in December 2017 that I was diagnosed with Stage 4 squamous cell cancer.”

The cancer affected the upper left side of her jaw, causing inflammation and tooth loss. At the time, doctors and even her dentist did not know Henson’s auto-immune disease could turn into cancer. But not even a month after her diagnosis, a new medical study came out from Mayo Clinic highlighting how the disease could become cancer in later years. When she was diagnosed, doctors were worried the cancer had spread to the bone in the roof of her mouth, though a biopsy showed the cancer had not. Henson remembers the call she received from her doctor saying the bone was cancer-free.

“They told me it hadn’t spread, so they could just take the tissue and the left jaw,” Henson said. “That was great news. But when we scheduled the surgery, the earliest it could happen was a month later in February. By then, the cancer had spread to the bone.”

Henson had her upper left jaw and the roof of her mouth removed in her first surgery, which was a success. It left her with a hole in the roof of her mouth, which opened up into her sinuses. This was solved by a doctor in Indianapolis—where Henson has commuted to every week since her diagnosis—who created an obturator that fit into the roof of Henson’s mouth and was held up by a sort of muscle band. They told her they removed all the cancer and she didn't need chemo or radiation.

“I healed and with the obturator in place, I was able to talk, eat, drink out of a straw—things I couldn’t do right after the surgery,” Henson said.

Just a few months later in August, Henson began experiencing the same symptoms in the upper right jaw, caused by a rogue squamous cancer cell.  Henson went on to have her upper right jaw removed in a second surgery. After the second surgery, eating and keeping food down was a struggle for Henson. She began to lose weight and weighed only 104 pounds.

“I remember getting on the scale and thinking, ‘I’m going to die, this is going to kill me,’” Henson said. “I couldn’t eat, I couldn’t keep food down. I was doing chemo and radiation; something I didn’t need the first time.”

They inserted a feeding tube, which helped her receive the nutrition she needed. After the second surgery, Henson still had the obturator, which doctors wanted to keep into place while she went through radiation and chemo. Just two days after finishing six weeks of chemo and radiation, the obturator fell out.

“I thought, ‘Thank the Lord,’” Henson said. “All this time, it stayed in, He allowed it to stay in. For six weeks, every day, I had chemo and radiation, so I couldn’t believe the timing of it all.”

Henson is now going on three years of being cancer-free and has started to gain her weight back. She is able to talk, drink, eat by tearing food up into small pieces and swallowing whole, and do everything she was able to do before—well, almost everything.

“I may never be able to have a steak again, but every now and then, I get a hamburger from Burger King because it tastes so good,” Henson said with a laugh. “Something I’ve realized though is that chewing, which I can’t do anymore, is underrated! You get so much enjoyment from biting into the food you eat and getting all that flavor, something I can’t do.”

Henson is working with her with doctors and a dentist in Indianapolis to get a silicone obturator and teeth, both of which have magnets in them to keep them in place.

“They call it SmileTeeth. I may never be able to bite with it, but it fills out my mouth and lips,” Henson said. “That’s something a lot of cancer patients will tell you, how cancer affects your body. But you know what, I’m able to sit up, take nourishment, go and do, and be with my friends and my family.”

Henson thanks the Lord for his continuing love and care, and she credits her family for their constant support through her journey. Without them, she is not sure SHE would have gone through treatment like she did.

“They really were the reason I kept going,” she said. “I couldn’t imagine not being there for my family’s lives.”

Despite the affect her cancer journey had on her life, it all, in a way feels like a dream to Henson. This is where the notebook and the calendars come in. When Henson took the time to look through the notebooks and calendars, those memories came back, and she remembered.

“I did go through that; I went through all that,” she said. “It’s something I think everyone should do, especially in the first year or so of your diagnosis. I remembered when the doctor described what the first surgery would be like, and he made this sweeping motion as if cutting his neck to take out the lymph nodes in her neck, and that’s what they had to do in the surgery. I remembered the doctor’s visits, the chemo treatments, everything.”

“Keeping those notes was one of the best things I could have done,” she said. “When I looked through them, it was refreshing because I had forgotten a lot of it.  It was difficult, that year and a half, but it just gave me a new insight into how strong I was, how resilient I AM, and how far I’ve come three years later.”