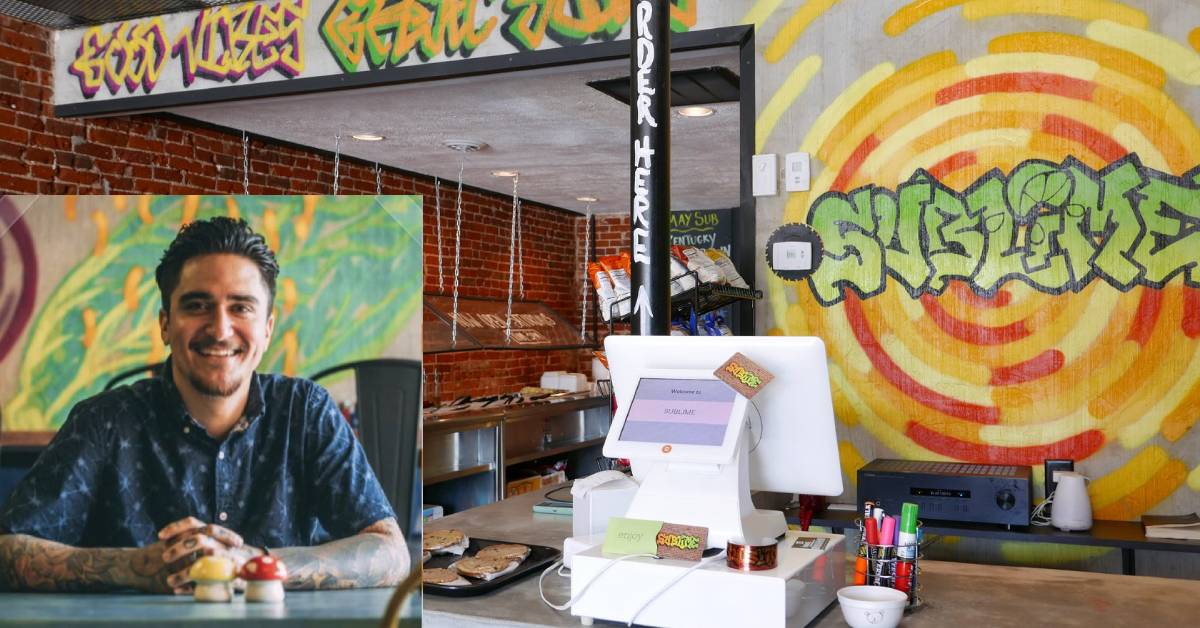 *Editor’s Note: due to state regulations in the wake of COVID-19, Sublime Subs is currently offering customers to-go orders and pre-made salads. To place an order, click here.

What better way to energize yourself (or mellow out) than to nourish your body with a healthy, fresh lunch in a sublime setting? Northwest Indiana dwellers and travelers alike can visit this destination composed of two stellar universes colliding at Sublime Subs.

Located in downtown Winamac, the Sublime Subs menu features gourmet hot and cold sub sandwiches, a 12-foot help-yourself salad bar, daily homemade soups, a "hurry up fridge" stocked with premade goods for those on the run, specialty coffees, and a unique atmosphere to enhance the lunching experience.

Owner Zeke Vasquez has never been a huge fan of fast food, and he always wished for more options when it came to eateries in Winamac and the surrounding areas. In 2018, he joined his friend Nora Schambers in opening Sublime Subs.

“We really wanted to offer something fresh to the community,” he said. “I think we needed choices that are freshly cut and made every day. Like most small towns, we really lacked that kind of restaurant.”

Intending to offer people a healthy and delicious lunch break, Vasquez and Schambers were stunned by the overwhelmingly positive response from the community—and the sudden demand Sublime Subs created. In just over a year, Sublime Subs has attracted a loyal team of followers, and steady newcomers.

“I have been told by many of our regulars that Sublime is their favorite and the best restaurant in town! Honestly, I’m getting a little nervous for summer. I’m gonna have to hire a lot of people because we were slammed last summer!” Vasquez laughed.

He agreed that popularity is a good challenge to contend with as a business owner. As of last summer, Vasquez is the sole owner of Sublime Subs. Deciding to focus her energy on raising her two kids when the demands of the business became heavier than anticipated, Schambers sold her share of the company to Vasquez. Now, he, his girlfriend Stacey Horan, and his team member Zoe Healey run the show. Soups (Healey’s focus), specialty items like pot roast and chicken, and freshly chopped vegetables are prepared in-house, daily. Everything is fresh.

But what the reader is no doubt really wondering is, how did the theme come about? Vasquez may not be a huge fan of fast food, but one thing he is a huge fan of is the band Sublime. A professional musician himself, Vasquez has always been drawn to the sounds associated mostly with bands from the ‘90s.

“I actually toured in a band called Islander for quite a few years,” he said. “I got tired of being on the road all the time. In 2016, I toured 10 months out of the year and it just wore me down. I’m a homebody, really.”

Vasquez decided to settle down for some time, and Sublime Subs offered him the perfect opportunity to throw himself into a new project focused in his hometown.

“It just kind of happened! I’ve bartended, I worked at different restaurants over the years, I knew a bit of the industry. I learned to cook from my mom and grandma, and I thought, why not,” he said.

One of the joys he’s found in ownership of Sublime Subs is in catering the atmosphere to patrons as much as he does customizable sandwiches and salads.

“I think people are really drawn to the vibe, the music and everything, not even just the band Sublime. I think they know when they come to Sublime Subs that’s the vibe—it’s summertime, you’re by the beach, it’s relaxed,” he said.

Particularly, Vasquez enjoys putting together playlists to broadcast in the store.

Sometimes, Vasquez will sneak in his own original music to the playlist. “Sometimes people from town will notice,” he said with a laugh.

His music has been featured in shows on major networks like ABC and NFL on CBS, to name a few. You can find Vasquez’s original music under his artist name, Brodie Z, on Spotify, Apple Music, YouTube, and more.

Vasquez and his team have a lot of ideas for Sublime Subs’ future. They’ve already implemented a successful baked potato bar on Monday evenings, and they’re excited to work on outdoor seating arrangements and extended hours for the summer crush. Eventually, Vasquez would love to include rotating beer and wine offerings, and an allotted time and space for musicians to perform. Could another location or two be opened in the future? We’ll see (and hope).

“I would love to open a Sublime Subs in a college town. I feel like this is right up college kids’ alley, with the ‘90s vibe and the convenience of self-serve,” Vasquez said. “But then, fresh, delicious food and convenience are up a lot of people’s alley.”