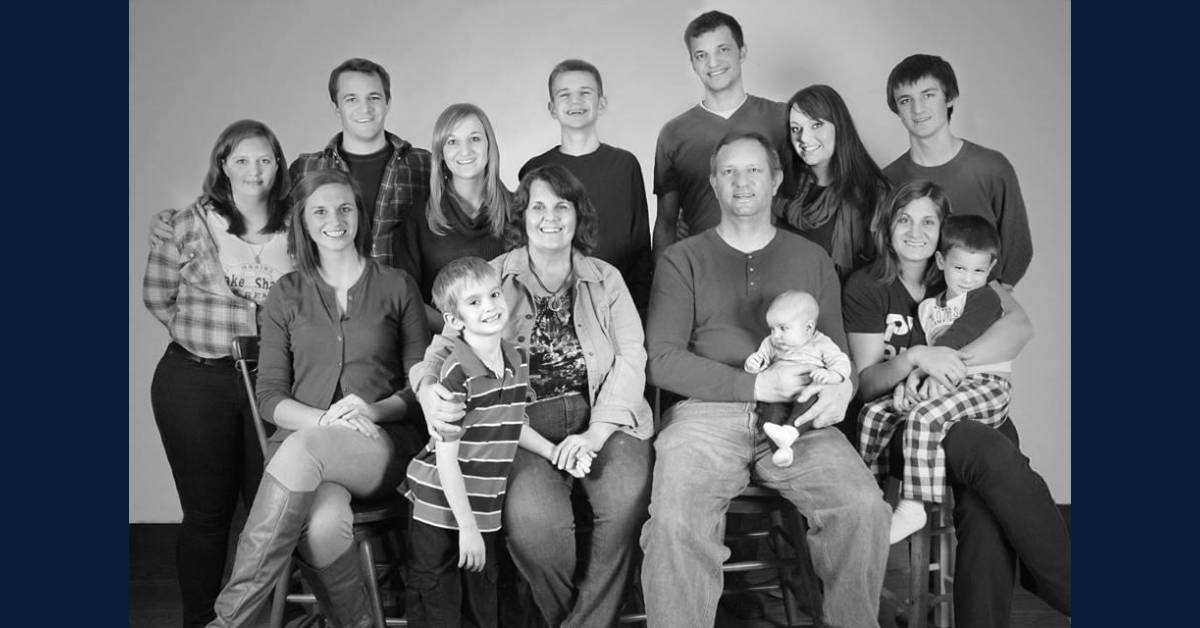 It’s the end of an era for one family at St. Mary Catholic Community School.  This year the school said goodbye to Doug and Patty Kvachkoff.  The parents of nine children have been a part of Saint Mary’s School for 30 years! Patty said that during their time at St. Mary’s there were many changes at the school.  There have been 4 different principals, Mrs. Bacon, Sister Kathy, Ms. LaPeer, and Mr. Ruiz (the last 15 years).  The uniform color went from royal blue to navy blue.  Patty said, “When our oldest daughter Mary started at SMS, there was no cafeteria and elementary wing. She attended kindergarten in the same place we have it today, but started first grade with Mrs. Walker in the “old building” (located east of the church where the parking lot is now). The “new building” was finished her first grade year and classes transferred over there.”  She said, there were “no computers, no televisions in the classrooms, no Smartboards, no cell phones, no electronic bells and no security buzzers at the doors. Doors were unlocked during the day.”  She also said, “school lunches used to be cold lunch only - then I think for a while they were prepared in the kitchens at school - before we started the satellite program with CP schools.”  Patty said that the Spaghetti Supper also has changed.  The pasta for spaghetti supper was cooked in the school, not off site.  They spent all day Tuesday cooking pasta in the old kitchen.  One of the biggest changes at St. Mary was that the current fundraiser, Celebration of Gifts, started as a simple Mother’s Day tea. It was not a fundraiser back then.  She said, “we had a lovely pitch-in tea and, in later years, a mother-daughter fashion show. It gradually expanded and evolved into Celebration of Gifts.”   Her favorite thing from the early days, “No car line!!!!”

There were many highlights throughout the years.  The first was graduating 9 children from eighth grade at Saint Mary’s: Mary (2000), Michael (2002), Katie (2003), Chrissy (2005), Patrick (2007), Caroline (2011), Thomas (2012), Steven (2015), and Nicholas (2021).  They loved taking field trips with their children, especially the overnight Indy trip and the Washington DC trip!  Patty reminisced and said that she enjoyed serving on Home and School and Advisory Boards but the highlight was, “serving as Athletic Board President (back when we had an athletic board). My husband was athletic director and we ran the athletic program, along with the other members of our board. What fun it was to spend every weekend in the gym, on the soccer field, or at cross country meets! So many good memories from that time with so many good friends!”  The Kvachkoffs enjoyed working at fundraisers, especially Spaghetti Supper, Vegas Night, and Pancake Breakfast.  They especially enjoyed making lifelong friends who are still their friends today.

The Kvachkoffs have many favorite memories.  In fact, they have so many sports memories that Patty listed them:

●     Watching our eighth grade boys basketball team (Mary’s year) play Taft and come back from behind due to amazing 3-point shots.

●     Having our basketball teams compete against each other for CYO championships. Everybody came out a winner!

●     Coaching our kids in volleyball.

●     Team parties at Ponderosa and end of season overnight parties at our house.

●     DC Trips, especially getting lost in DC with Ed Cole. We had to take a taxi back to meet the bus and the taxi never came ... then finally came but, the driver didn’t speak English ... Needless to say, we were late for the bus.

Patty said, “We don’t have any regrets about our time at SMS. Our children and their Catholic education was the highest priority for our family, and we worked hard to make their time at St. Mary’s productive and successful. Along the way, we made so many friends. Our children’s friends at SMS are, in many cases, still their friends today.  I guess if I had to think of what I wish we’d done differently, I’d suggest not sweating the small stuff. In the end, everything usually works out for the best.”

Patty had encouragement for younger families.  She said: “GET INVOLVED!!!!! We can’t stress this enough. Help out in fundraisers, field trips, car line, lunch room, class parties - whatever you can fit in your schedule. Not only will you meet lots of pretty great people, but your children will remember seeing your faces at their school for the rest of their lives.”   She went on to say, “try to stay out of the drama. There will always be someone complaining, or trying to stir up a situation. Sometimes it’s warranted, sometimes it’s not, but try to avoid getting involved in school gossip. Rise above.”  “Make friends with your students‘ teachers. Most of them are moms and dads just like us, trying to do their best. Over 20 years ago, my husband stood up at a home and school meeting and stated that he felt that St. Mary’s teachers are some of the best teachers in the state and this still holds true today. Work with your teachers, and they will usually go above and beyond to help your children.”   Her final words of wisdom, “encourage your child to keep developing their Catholic faith, even when they’re not in school. Provide opportunities for service hours, attending weekend mass, reconciliation, etc. Be a symbol of that faith to your children.”

The school appreciates the Kvachkoff family for their many years of service at Saint Mary’s School and wishes them the best as they leave to continue on their educational journey.  Principal Ruiz said, “The Kvachkoff family is an inspiration for the rest of us parents.  They’ve lived out the philosophy, what you put into something is directly proportional to what you get out of it.  The effort they put into St. Mary’s School can never be measured, but believe me when I tell you, this community is blessed to have had the Kvachkoff family here for all these years.  Doug was a quiet leader who everyone here respects and Patty is someone I would seek out when I needed to be told the honest truth.  The kids were awesome!  Very likeable and extremely talented in a variety of ways, but always very humble about their accomplishments.  This family will be missed!”