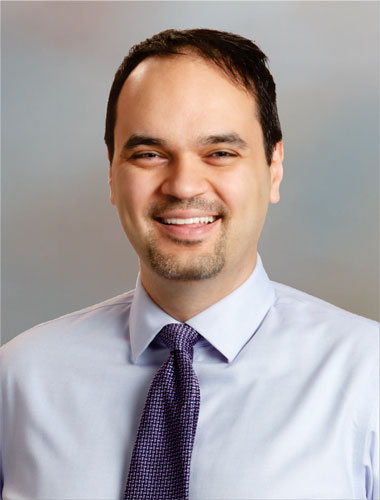 Ajam grew up in Merrillville before moving to Valparaiso where he graduated from high school. After high school, Ajam attended Indiana University where he did nearly all of his training in medicine. In choosing cardiology and electrophysiology as his specialty, Ajam knew the time it would take to complete his training.

“It’s about fifteen years,” Ajam said of the time it took him to complete his training.. “It’s a long road! In terms of amount of training that you need, it’s one of the longest specialties you can do in medicine.”

After finishing his undergraduate studies in Bloomington, medical school at the IU School of Medicine, and fellowships at Indiana University Health-Methodist Hospital in Cardio Electrophysiology and Cardiology, Ajam moved back to Northwest Indiana where he settled in Winfield.

“It’s great to be back in the community!” Ajam said of returning to the Region. “Some of my colleagues who I had trained with had joined (Community Healthcare System) a year or two prior and they’d only had the best things to say. They said, ‘if you’re going to work in the area, they’re the best people to work for.’ Administration has been very positive which is, I hear, not very common. Here, everybody has been excellent to work with.”

In working in electrophysiology, Ajam will be working with patients who have heart and rhythm disorders and issues such as a heart that is beating too fast or too slow.

“We manage it partly with medicines, like a general cardiologist would, and then mostly with procedures like pacemakers, defibrillators and ablations that slow down the heart,” Ajam said. “It’s one of the few fields in medicine where we can do something that can genuinely save someone’s life. On top of that it makes them feel a whole lot better. We’ve developed systems that are like GPS systems in the body using magnets and position sensor patches so we can generate 3D maps of the heart and its electrical system. When I saw that stuff I was just really amazed and I thought, ‘that’s what I want to do for the rest of my life!”

“Since 2005-06, radiofrequency ablation has become much more common and the ablation procedures are catheter-based procedures through the leg where we insert catheters into the heart, diagnose people’s rhythm problems, figure out what their rhythm disturbance is and why their heart’s going too fast in general.”

The procedure to treat Atrial fibrillation, over the last decade, has gone from an 8-hour procedure down to a 2-3 hour procedure and the risks involved are far less than the previous method which was open heart surgery.

“The alternative used to be opening up the heart,” Ajam said. “Now that procedure is becoming less and less common. In general, it’s an outpatient procedure and you’re home and walking the next day. It’s definitely come a long way.”

Electrophysiology is one of the fastest growing areas in cardiology and as the technology, the techniques and the medicine has gotten better there has been a drop in the rates of coronary artery disease and heart attacks.

On September 14th, Dr. Ajam will be hosting a seminar at St. Mary Medical Center titled ‘Getting Back in Rhythm’ where he’ll be discussing different types of arrhythmias and advanced treatments to get your heart back in rhythm.

“Anytime something new and game-changing comes along it takes some time and education to get it going. I’ll be holding a session on the basics of the heart and issues about passing out. I’ll also spend some time talking about our catheter ablation and the new things we offer our patients, like atrial fibrillation, because it is so common.”