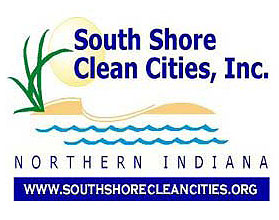 "The theme of this year's meeting was 'Together we make great things happen,' and that includes students," he said. "We were excited to host these three groups at the meeting because it is vital that our nation's young people become involved with and consider careers in environmental science."

"South Shore Clean Cities and its supporters are making a difference. In October 2013, net petroleum imports to the U.S., which include petroleum and diesel, were at their lowest levels since February 1991. We also held more than 75 education events to promote the use of clean diesel technologies, alternative fuels and petroleum reduction activities throughout the state," he said. "We will continue to make a difference, as our goal in 2014 is to show a 20 percent reduction in petroleum imports."

Members of the organization were recognized for their work in five areas: accessibility of vehicles, conversion kits and project funding; early adopters of alternative fuels and technologies; emission reduction technologies; providers of infrastructure and fuels; and partners in outreach and training.

"We're here today not only to recognize what South Shore Clean Cities has accomplished, but to bring attention to the fact that they have been real connectors throughout our communities," she said.

Lisek recognized the work of retiring board member Cindy Lundquist, who had been involved with the organization since 1999.

"She was one of the original board members. She was sponsored by NIPSCO to provide CNG racing," said Lisek. "She and her husband, Charlie, were like pioneers travelling all over the country promoting natural gas. Cindy has really made a difference in northern Indiana and she'll be missed."

"We want to provide charging stations to reduce range anxiety for EV owners," Kirkham said. "The second phase will have a budget of $1 million in incentives."

For information about IN-Charge Around Town, visit NIPSCO.com/INCharge. NIPSCO will partner SSCC to implement and manage the program.