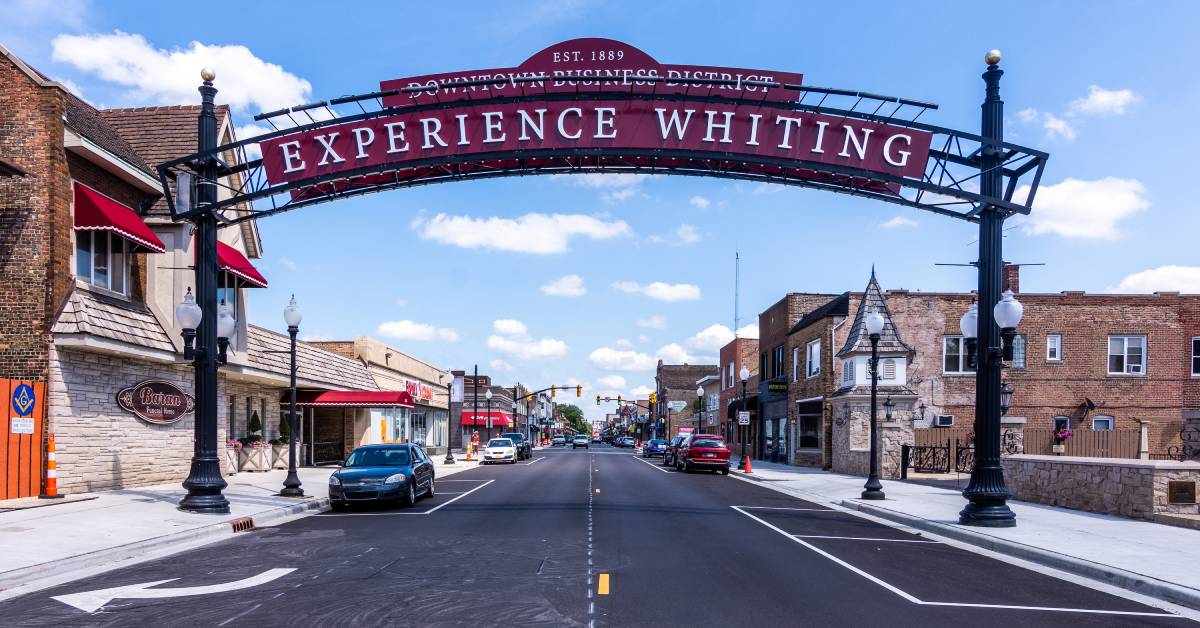 Whiting. Ah, Whiting! What a fun place to spend the afternoon! Whether taking a casual stroll along 119th Street, perhaps stopping into Grindhouse Cafe for a quick cup, or maybe a cool iced treat from Whihala Ice Cream, Whiting offers a little something for the whole family.

Incorporated in 1895, Whiting was named after trainman “Pop” Whiting, who was killed in a crash there. The whole city comprises just over three square miles and has a population of roughly 5,000 people, according to 2010 Census data. This gives the little city a truly cozy, “home-town” feel, with a dash of wackiness that is hard to find anywhere else.

Whiting has five city parks, perhaps most famous among those being Whiting Park, which is adjacent to Whihala Beach, and perhaps one of the nicest beaches in all of Northwest Indiana. Whihala is also home to the WhoaZone - a floating summer attraction that brings fun to the whole family. Though closed for the 2020 season due to COVID-19, WhoaZone is slated to welcome families once more next summer.

The city features several historic buildings, such as the Hoosier Theatre, built in 1924 and the Whiting Memorial Community House, built in 1923. Both places are listed in the National Register of Historic Places. Whiting is also home to the Whiting Public Library, a historic Carnegie library, built in 1905 with money donated by notable philanthropist and businessman Andrew Carnegie.

Like many small towns across the nation, the heart of Whiting is its business district. For Whiting, that would be 119th Street, which is lined with ice cream shops, coffee shops, restaurants, the Hoosier Theatre, city hall and much more.

Whiting is perhaps best known though for its annual Pierogi Fest. Scheduled annually for the last weekend of July, the celebration of that tasty dumpling spans three days - Friday through Sunday - and sees nearly the entire main street of the city shut down to vehicular traffic. The wacky event celebrates not just the venerable food it’s named after, but all things Polish. The fest kicks off each year with a lively “Polka Parade,” featuring the dancing Buscias, who sweep their way (literally) along the parade route to the sounds of polka music. After the parade, the fun continues with a Pierogi Toss, live entertainment, a beer garden and numerous food tents set up, serving not just pierogies, but pizza, kraut, burgers, corn dogs and virtually anything else you can imagine. The fest typically draws in visitors from not just the Region, but around the world and typically boasts 250,000 visitors each year.

The city of Whiting is under the astute leadership of Mayor Joe Stahura, currently in his fifth term as mayor of the lakeside city, who was awarded the prestigious State of Indiana Sagamore of the Wabash award in 2005. Mayor Stahura has been a very vocal advocate for his city, overseeing a robust push for aggressive business development, and an overall goal of transforming the little city into a destination location. He is also well known for his fine taste in menswear.

One of the most recent additions to the little city on the lake is the Mascot Hall of Fame. Serving as both a children's museum and a physical hall of fame for North American sports mascots, the 25,000 square foot Mascot Hall of Fame features interactive exhibits, a food court, gift shop, and an indoor play area for children to play basketball, soccer and even try for a field goal.

For more information about this wonderful little city, visit them online at https://www.whitingindiana.com/.