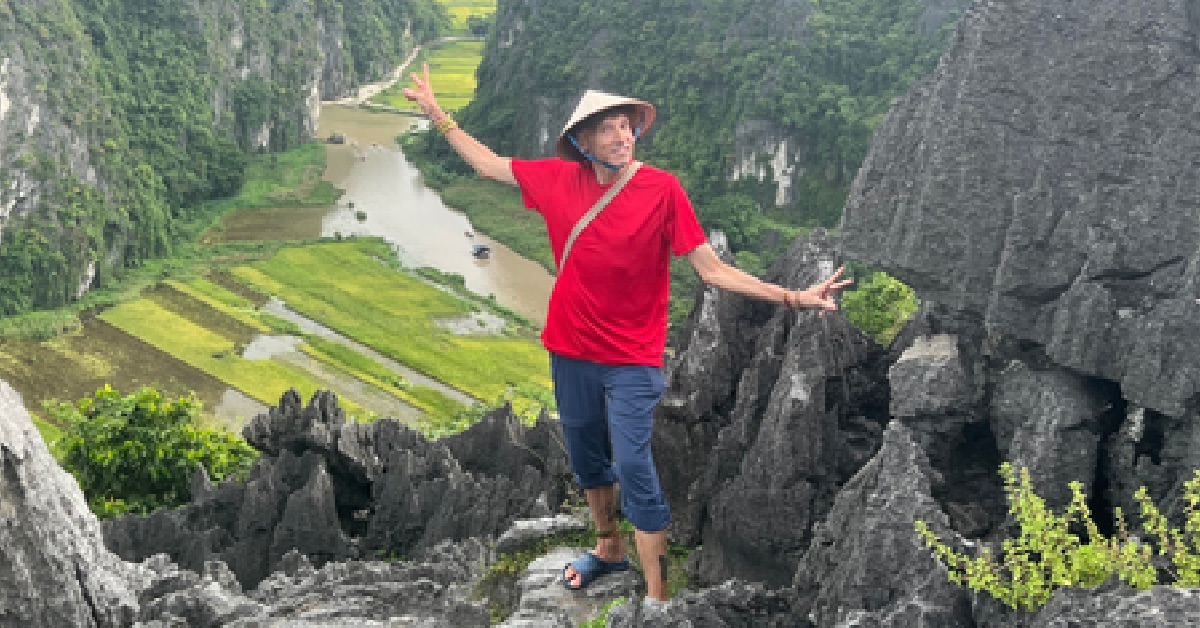 70 classes taught over 19 years; 118 countries visited; and a #18 rank on Best Value Schools’ list of top U.S. professors. Those are some hefty numbers for someone who works with words rather than math, but Scooter Pégram, associate professor of French and Minority Studies, owns them all.

Pégram is a world traveler, researcher, and high-impact educator—all in one. And as the chair of the Department of Modern Languages, he teaches a wide range of courses, from the history of hip hop to French literature and culture.

“I’m teaching classes that represent all the various things I do. All of my strengths are emphasized,” he said. Last semester, Pégram taught courses as varied as himself: The African Caribbean, all levels and genres of French, and classes focused on Women’s and Gender Studies and Black Cinema, amongst many others.

A wearer of many hats, Pégram’s research into francophone cultures has taken him across the world, and back. “I’m working on several studies—one is looking at various issues in regard to racism and integration in France, and another is studying dialectical variations of French spoken in several West African countries. I’ve got one in Laos and Cambodia looking at French language shifts,” he said. “It’s very much a world language.”

An emphasis on French, as a world language, is how Pégram hooks students. He said that although Paris is the first city many of us think of when we hear spoken French, the largest francophone nation in the world is actually in Africa—Kinshasa, the capital city of the Democratic Republic of Congo, to be exact.

“French is not what you think,” Pégram tells students. “It’s got a bigger reach than you’d ever realize.”

Once students take the bait and sign up for Pégram’s class, they’re really in for a treat. Pégram is dedicated to creating an environment where students feel welcome and comfortable to explore the world and all the new concepts that come with it.

“I’m a little bit ‘extra,’ as the students will say, and because they see that, they feel comfortable” he said. “They know they have a friend in me.”

Pégram has an open-door policy and wants students to know that he’s there for them from day one. In fact, most students know him simply as Scooter. “I’m like Madonna,” he said jokingly. “I operate on a first-name basis only.”

But no matter what you call him, it’s a given that if you’re in one of Pégram’s classes, you’re about to have your worldview expanded with brand-new perspectives.

Although his academic research and publications focus on minority issues in Francophone Caribbean, Africa, Southeast Asia, France, and Québec, many of these topics are applicable to problems in the United States. “You start to connect the dots and see how some of the issues in African American history and culture are also things that happened in the Caribbean. Students begin to understand the big picture,” he said.

When Pégram says “big picture,” he means it. For him, the big picture involves looking at issues through a worldwide lens and not limiting yourself to a local perspective. “Your passport is meaningless,” he said. “You’re a global citizen. If I could change my Canadian passport to ‘Earth,’ I would do that.”

The classroom isn’t the only place where we should be learning. Pégram encourages his students to get out of their comfort zone, whether it’s traveling abroad or searching for new ways to immerse themselves in local cultures.

He stresses that there’s always a way to find new experiences. Growing up in household with very little means, Pégram understands that lack of money is often a reason why people sideline their travel plans.

“Students think they’re trapped in a small world with big limitations. You can travel without traveling,” Pégram said. “Go to a Thai restaurant, go to an art museum. Start small. There is always a way locally to expand your mind, and connect with another culture.”

Even with such an adventurous spirit, Pégram is enthusiastic about staying put at IU Northwest.

“I love this job,” he said. “It lets me spread my wings in a way that not only benefits me, but that I can bring into the classroom. I can get my students jazzed up, and nothing makes me happier than seeing when they go overseas.”

Despite a growing number of countries checked off the “to visit” list and positive student reviews, numbers aren’t the best way to define Pégram. Instead, he’s defined by experiences, both in and out of the classroom. “I’m constantly moving around. The Earth is my neighborhood,” he said.

At IU Northwest, we’re glad he’s landed in Northwest Indiana, even if he flies off to another continent, once in a while.