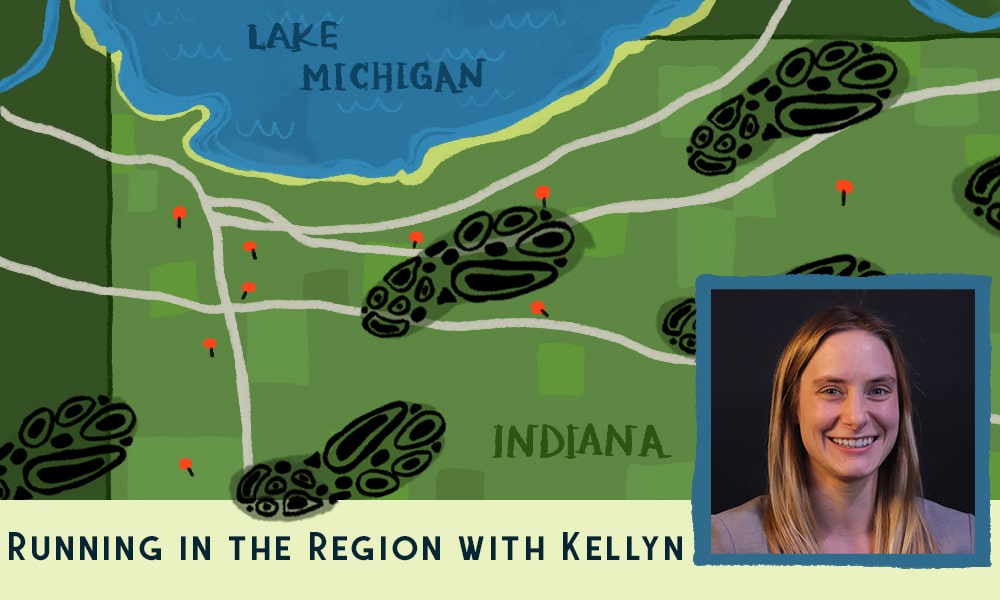 When it comes to champions in the sport of running, most running nerds will immediately think of big-league names like Emma Coburn, Galen Rupp, the infamous Steve Prefontaine--the list goes on. It’s common to think that these stars emerge from far away places, the likes of Oregon or Colorado, and often we don’t stop and appreciate local athletes who have also achieved incredible feats. Northwest Indiana finds its own local legend in the form of Jarrard “Jarry” Ashmore, long-time runner with an impressive record and a boatload of knowledge accumulated from over 50 years in the sport.

A Hall of Famer at Western Michigan University and Olympic Trials qualifier, you might think Ashmore was born into the sport of running, but it was a happy coincidence in his freshman year at Griffith High School that introduced him to cross country.

“I wanted to play basketball, but you had to do a fall sport if you wanted to play,” Ashmore explained. “Back then they only had two options: football and cross country. I missed getting a physical on time for football, so I had to go out for cross country; that was a lucky break really.”

That stroke of luck would turn into a long and successful career, one Ashmore built from the bottom up.

“My first race I got second to last,” Ashmore said. “The next race I thought, ‘I’ll push a little harder this time’ and finished in the middle of the pack. By the end of that season I was our number five guy.”

Ashmore’s career continued to climb throughout high school. By senior year he was unstoppable, finishing 10th in the 1955 cross country state championship. What’s even more impressive is that he achieved this feat with no real direction from a coach.

“I was clueless about the sport, but really so were my coaches,” Ashmore explained. “They gave us no workouts, no long runs, nothing; I was running on pure talent and my own knowledge. Senior year I added one workout to my training, a German term I’d read in a magazine called ‘fartlek’, meaning speed play, but that was it.”

Ashmore’s gift for running carried him through an impressive college career at Western Michigan University. So successful was his racing that it earned him a trip to the Olympic Trials as a junior, where he placed 8th in the 5,000m run.

“If you’re a runner, there will probably be a race you just can’t forget because you could have done better but you didn’t. The Olympic Trials is that race for me,” he said. “I got comfortable during the first half, woke up with 600m to go and realized I wasn’t tired!”

“I probably could’ve run a 54 second last lap if I’d have cut loose, but I always hated when runners sprint the last lap like they have 100% left,” Ashmore continued. “That meant one of two things: they either didn’t try at all, or they just dogged it or miscalculated, so I didn’t sprint the finish. I’ll never forget that race.”

Ashmore’s Olympic Trials appearance was impressive nonetheless, something thousands of runners only dream of. Following that fateful race, Ashmore finished out his college career on a high note, going up against legendary runner Billy Mills, gold medalist in the 10,000m at the 1964 Olympic Games in Tokyo.

“I beat Mills the last three times I raced him,” Ashmore said. “One of those times was at the NCAA Championships; I got 3rd with a 13:53 three mile. After the race, Mills said, ‘I was the worst three miler on the track today’, and the next thing I knew he won the Olympics! I actually have a letter from him somewhere, he’s a really good guy.”

Post college, Ashmore represented the Chicago Track Club for a few years before shifting from athlete to mentor, assuming coaching positions at various schools including Griffith, Michigan City, and Andrean. At one time he was coaching three young men from three different schools, often meeting up with them at Gleason Park in Gary for workouts.

“That year those guys went one, three, and four at the state meet,” Ashmore said. “I trained all of them at the same time; to have my guys finish 1st, 3rd, and 4th was unusual!”

Ashmore has coached countless athletes to greatness using some rather unique methods.

“I once coached a kid through the mail when I was in the military,” Ashmore said. “I’d give him hand-written workout instructions in letters. That kid ran a 4:06 mile that year!”

Though he doesn’t currently hold an official coaching position, that hasn’t stopped Ashmore from sharing his pearls of wisdom with the young runners of today. Just this summer, a chance encounter with a young man from Lake Station High School once again made Ashmore a mentor.

“I walked out my front door one day and there was a note on the ground,” Ashmore said.

That note was from Ethan Keehn, incoming junior at Lake Station and a young runner seeking guidance in the sport he loved.

“I was sick of not having anybody to go to that really knew a lot about running,” Keehn said. “I thought if this is something I really want to do, I need to connect with someone who knows more.”

Keehn found that connection in Ashmore, whom he affectionately calls “Mr. Jarry”, after a string of networking led him to Ashmore’s front door.

“I heard of Mr. Jarry through a friend of my mom’s, and found out that he lived in Lake Station,” Keehn said. “This town is like two miles wide, so I knew he had to live close! I eventually found his address, and that’s when I left the note.”

The pair quickly became fast friends, meeting up a few times a week to talk running.

“I first met Ethan at a McDonald’s in Portage. I gave him some training direction, and soon we were meeting every night,” said Ashmore. “He’s got a good mindset; he listens and really grasps the technical concepts.”

Though the two only recently got connected, it’s clear their relationship will continue to grow in the coming years.

“I most definitely hope this goes on,” Keehn said. “I just want to be a sponge, soak up as much as I possibly can and put it into action.”

“I enjoy advising runners,” Ashmore added. “There’s a lot of ignorance out there, but I have knowledge; I can’t take it to the bank, so I always share it if I can.”

Ashmore serves as a role model for the running community in the Region. With his decades of experience, knowledge, and dedication, he has some champion-worthy advice for anyone who truly wants to invest in the art of running fast.

“If you’re serious about your performance, and you really want to get the best out of yourself, you have to fit your life into your training, not your training into your life,” Ashmore said. “Everything else goes on the backburner. You don’t eliminate it, you just put it on the back burner.”