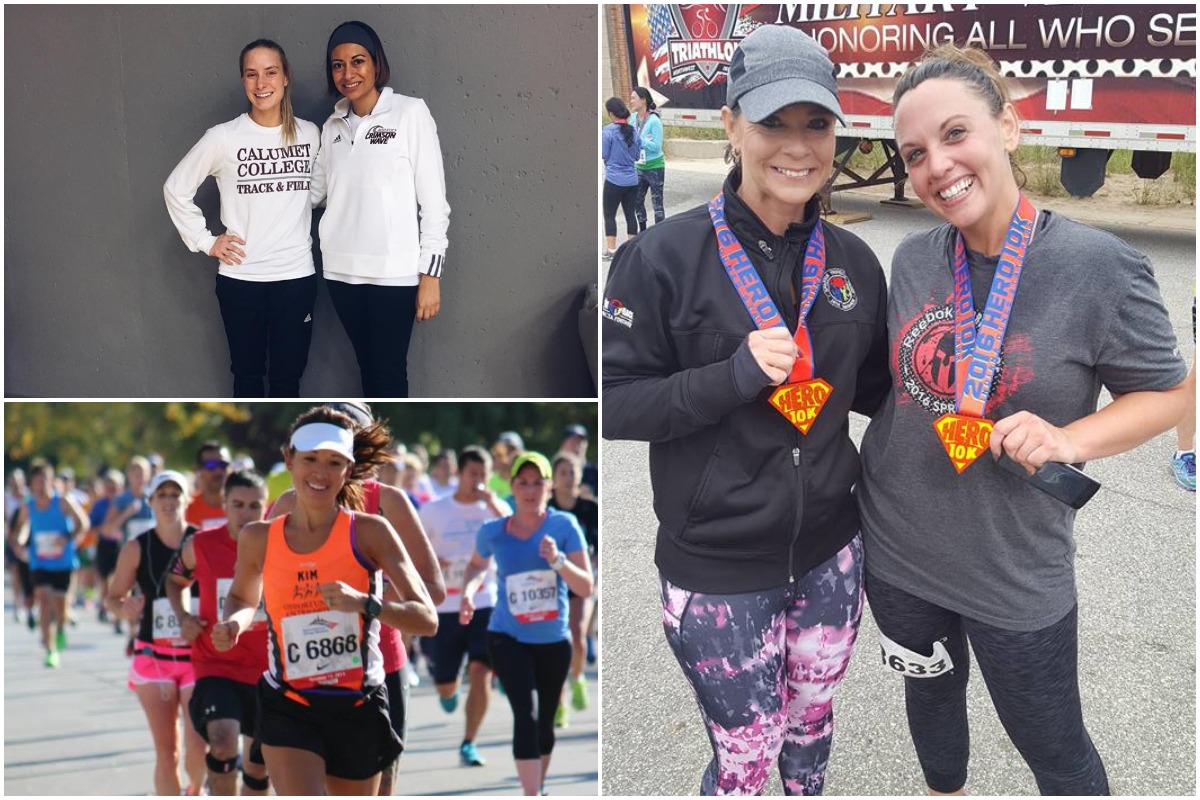 One of the fundamental elements of life is a true connection with others. We look for these friendships through school, work, mutual friends, or family, and over time, find groups that we seem to just belong to, forming kinships that last lifetimes. Perhaps one of the strongest places to form these bonds is in the sport of running. And there are several people here in the region who could tell you why!

Jackie Torres, head women’s cross country and track coach for Calumet College of St. Joseph, has been running since she was just 6 years old, and is a true testament to the power of relationships built through running.

“My parents were both runners, so naturally I ran my first race at the age of 6,” Torres said. “From there it evolved into the best love-hate relationship of my life.”

Torres says a close friend of hers, who recently moved to Oregon, was one of her favorite training buddies as an adult.

“We would solve world problems, lay out our future plans and just become kids playing in nature on our long runs,” Torres said. “You can't explain the kind of relationships and conversations you have with someone on a run. The best running friends are able to talk smack to one another, see each other experience the worst bodily malfunctions through the miles, then hug it out at the end of the run and plan to do it all again next week.”

Torres believes this kind of unique partnership stems from a sort of underlying understanding all runners seem to have.

“Most sports use running as a punishment and we can't understand why because we love it so much,” Torres said. “Runners understand that running is more than just running, it's a lifestyle and a sport filled with life lessons that evolve into each new stage of your life.”

Torres has learned the true value of the people she has met through running, regardless of age or ability.

“My running friends are of all ages and inspire me every day to live life to the fullest. They are always up for a new challenge or race and they just get things that no one else will understand,” she said.

While some people are pretty much born into the world of running relationships, others discover them later in life. Jenny Craig-Brown, executive team leader for Ideas in Motion Media, got into running about 10 years ago just to improve her overall fitness, and ended up running into some of the greatest friendships of her life.

“The best part about running are the buddies,” Craig-Brown said. “I’ve run with so many people over the years, but most often run with my friends Chris Sandberg, Nick Schwerd, and Sandra Schaffer. My running buddies keep me accountable and help me drag myself out of bed at 4:30 a.m. to meet them.”

Runners are notorious for putting in some pre-sunrise mileage, but Craig-Brown said the good company makes every step and every minute of missed sleep, well worth it.

“The pre and post run chatter is amazing,” said Craig-Brown. “That’s the time we all get to catch up with each other about everything we have happening in our lives.”

Pre-run hellos bring the group together, and the silent suffering through many sweaty miles unifies their strength. Post-run high fives and laughter seal the deal with a joy that brings everyone back the next morning, hungry for more.

“The bond is incredible because the people you run or workout with are ones that see you at your worst, but also at your best,” Craig-Brown said. “They see you without makeup, sweaty, snotty, gross and tired, but they also get to see you hit new PR’s [personal records] and goals you thought were impossible.”

Through that process, mere workout acquaintances flourish into friendships.

“When I moved to this area, my very first running group was the reason I found Ideas in Motion Media,” Craig-Brown said. “I met Theresa, a Lifer, who really supported my running journey and we became friends quickly. These relationships are real, and tend to stick with you for years.”

Sometimes a runner can hang up their trainers for awhile, but find new relationships that bring them right back to the miles they once loved.

“My siblings ran in elementary and high school, so I followed in their footsteps,” said Kim Orosz, assistant cross country and track coach for Wheeler High School. “After high school I quit running, and about 15 years later I decided to start it up again - definitely one of the best decisions I’ve made!”

Orosz said her two closest running “wives” are her friends Beth and Lindsay, whom she met while training with Opportunity Enterprises for her first Chicago Marathon in 2014. Like true distance runners, the trio is determined to get their mileage in no matter what the Midwest weather throws at them.

“They are always available for running no matter the time or weather conditions. You name it – we’re running before dawn, in the rain or snow, and even when it’s sub-zero outside,” Orosz said.

She added that this culture of perseverance and battles well-fought together is what makes having a running group so amazing.

“We’ve seen each other at our highs (completing marathons, accomplishing personal records) and also at our lows (running injuries, health and personal issues). No topic is off limits during runs. What happens on runs, stays on runs!”

Torres, Craig-Brown and Orosz are just three of the many individuals running through the region every week, and each of them encourage community members to embrace what a simple pair of running shoes and good company have to offer.

“I have found that the greatest feeling of running is being able to share your love and passion for it with others,” Torres said.

“My advice to everyone - find a running buddy (or five) and get out there!” Craig-Brown said.

“I have met so many people through running who are now some of my best friends,” Orosz said. “The running community in Northwest Indiana is special.”

Whether you’ve been a runner for life, are just getting started, or want to come home to the running-lover you once were, the runners of the region welcome you with open arms, and encourage you to lace up your shoes and get after it, one stride at a time.

To get started on your running journey, check out some of the following local running groups!