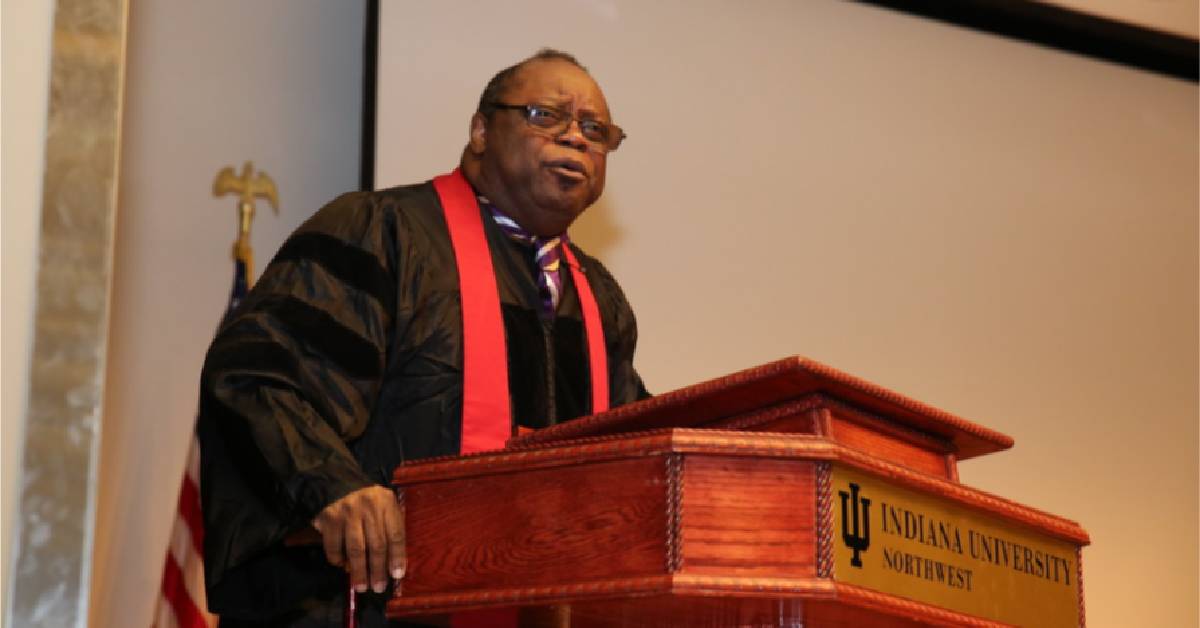 In celebration of Martin Luther King Jr. Day, Founder of Dialogues on Diversity Ron Jones and Director of IU Northwest’s Office of Diversity, Equity, and Multicultural Affairs James Wallace hosted a virtual event on civil rights. This event, titled “Putting the Civil Back into the Civil Rights Fight,” was one of many Social Justice Conferences that were part of Indiana University Northwest's 2021 Martin Luther King Jr. Celebration.

Focusing on the emotional aspect of politics as they pertain to everyday people, Jones talked through how to have productive political conversations with others.

“People have attached their beliefs to themselves so much that they have physical and emotional pain when those things get challenged,” Jones said. “You have to find the common language of bringing people together, and that common language is love.”

With the dangers of personal and cultural fragility as well as conformation bias threatening to lead to uncivil discussions, Jones assembled 11 points for more productive dialogue.

What do you want out of this interaction?

Being able to gauge what you truly want out of political discussion with another person will help you determine your approach to the conversation.

How’s that working for you?

Once you know what you’re looking for in a discussion, you can determine how successful these conversations have been in the past and what you may need to adjust in your mindset or approach to lead to more successful discussions.

Jones stressed that the opposition is not the enemy, but just a person or group of people that believes differently than you. He warned that you should identify and ensure it does not enter your side of the discussion. Wallace added that looking into others’ views is crucial to civil discussion even though it is uncomfortable.

“This is one of the really important rules of engagement, but it’s also one of the hardest ones to do,” Wallace said. “Once you immerse yourself in these views that are so different from yours, you really have to force yourself to digest it.”

After taking note of the first three points of the 11 points Jones outlined, you should be well-aware of what challenges are inhibiting you from being able to discuss issues in a civil manner. He said to remember and focus on the goal, which is to have a civil discourse, not your discourse.

There has been a trend of people treating politics like a sport – donning the colors of their party and only paying attention during election season, much like with a sports season. Jones noted that politics happen year-round and he encourages people to spend at least 90 minutes a month to check in on their politicians to see what they are doing and who they are meeting with.

“The idea here is that if you don’t understand the machinations of government, the government is going to get away with whatever it can. It’s going to say whatever it needs to sustain power,” Jones said.

“This election, about 62% of the voting population voted. That means only two-thirds of us did the thing that our founding fathers fought and died to give us the right to do. Those numbers are woeful. We’re in the bottom half of the top 30 in all the developed worlds in reference to our levels of voting and civic engagement.”

Not every battle is worth fighting, and Jones noted that sometimes choosing in advance to get it into your mind that you are not diving into an argument can keep a discussion from becoming just that.

Jones cited a personal example of an occasion when a man approached him and claimed that he hated Black people. Rather than immediately getting fired up, he went in with a calm attitude and asked the man to explain.

“What I said to him was, ‘I believe you believe this because you’ve only heard what you’ve heard about Black people from other non-Black people. You seem like a good man, and I don’t think you said what you said to make me mad. I think you didn’t realize you were trying to figure something out,’” Jones said. “The conversation was transformed because I wasn’t looking for a fight, and I’m not sure he was either. A lot of times, you have to allow people the chance to walk out their ideas. Some people don’t express or articulate themselves well right out of their mouths. So, you go, ‘Okay, explain that to me.’ That’s how you start to build a bridge.”

There are no angels or demons here on earth

Not demonizing and idolizing politicians is important to having a realistic conversation about civil issues.

“We have to discipline ourselves not to use hyperbolic language to explain things that are complicated,” Jones said.

Assume best intentions until you can’t

As Jones mentioned when it comes to picking your battles, you should be patient and allow people to walk out their ideas rather than assuming the worst of them. Then you can better gauge what their intentions are with the conversation. If it comes to a point that you realize they do not care about your humanity, that is when it is time to move on from that conversation.

Wallace stressed that while it is difficult to know your opposition, it is crucial to implement civil discussions. Jones built on that idea and said that with practice, these civil conversations and attempts to understand those with different beliefs gets easier with practice.

“Intellectual rigor is not intellectually easy. When you do it, you build up emotional calluses, so it can become easier to do that hard work later on.”

This intellectual exercise can often leave people feeling drained. Jones encourages individuals to be ready and willing to take breaks.

Social justice work is a marathon, not a sprint

Consistency in trying to add to the discussion surrounding social justice is what will truly influence change. There is no one radical idea that will change the practice of social justice overnight. Stamina is what will keep pushing the system toward change.

“This stuff should be a life-long process,” Jones said. “Civic engagement is always relevant as long as we are in a civil society. When we give up, we abdicate to the worst elements of ourselves. They depend on you not caring.”

Many people are emotionally charged when it comes to social justice issues, so an emotional appeal is what is going to help you build a connection to someone to then open up a discussion.

“We all have amazing civil rights stories to tell, and we should use those as the bridges to build a more beloved civil society,” Jones said.

With these 11 points, Jones and Wallace hope that people will more actively participate and advocate for civil discussions with others regarding political disagreements. He encourages people not to be disheartened with the length of the process that leads toward change.

“The idea of our immediate gratification culture sometimes makes us want to be frustrated with any progress for the sake of the progress we want. It never has and never will work that way, except toward really short-term, very targeted and specific gains,” Jones said. “The world that Martin Luther King Jr. talked about was definitely not the world we got, but the world we got was better than the one that he had. That’s the way it always works.”