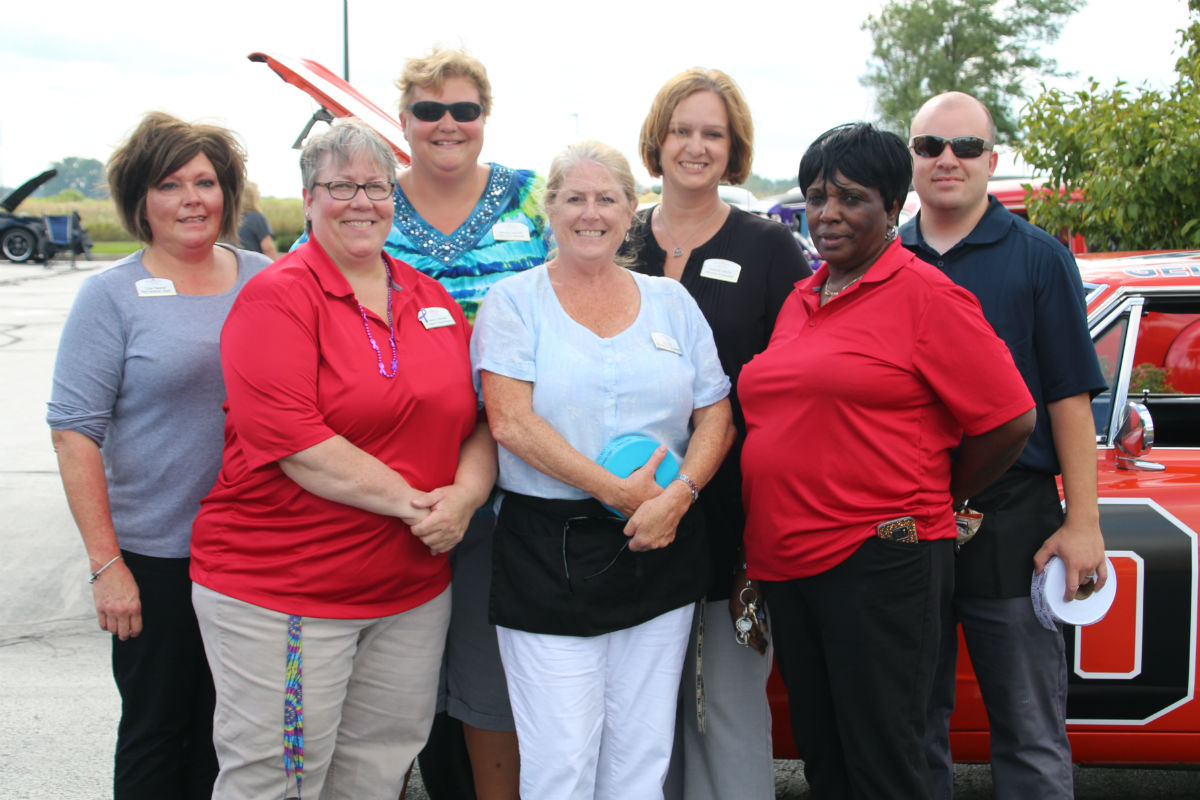 Rittenhouse Village at Portage teamed up with the Greater Portage Chamber of Commerce for the third year in a row on Thursday to throw the annual Vintage Car Show and Competition. Car enthusiasts from across the Region flocked to the assisted living center to show off their many custom and restored classic vehicles. From an old Hupp Skylark to a classic Pontiac Firebird to a beautiful ’71 Mustang Mach 1, there was a veritable wealth of lovingly restored, century-old vehicles, suped-up muscle cars and rat rods.

Rittenhouse provided food and drink for their many visitors and residents, while the Greater Portage Chamber of Commerce held the 50/50 raffle for the event and handled the judging of each vehicle. For the third year, the two organizations worked together for the better of the community.

“We believe very strongly, Rittenhouse and Discovery Senior Living, in giving back to the community,” said Marsha Leonard, Executive Director of Rittenhouse Village at Portage. “So we do various fund raisers throughout the year. Working with the Chamber on the Car Show has become one of the big ones. People just love it.”

Leonard was quick to add that they couldn’t have done it without the Portage Chamber.

“The Chamber and its members are just so engaged,” she said. “It’s just taken off.”

“It offers a different community perspective,” Bailey said of the event. “We are able to bring the community in, the residents here are able to enjoy the car show as well as be with other people from the community. Rittenhouse is just a fantastic partner, they provide the space, the food, and it’s just wonderful to work with them.”

The event, which had originally been scheduled for August 3rd, had to be rescheduled due to rain. That being said, it hasn’t stopped the event from growing in popularity over the years.

“We had about 25 cars our first year,” said Nancy Simpson, Executive Director of the Greater Portage Chamber of Commerce. “We had 39 cars our second year, and I believe we are at 25 cars this year due to the reschedule.”

Even though the number of cars didn’t grow this year, the community involvement was strong.

“We’ve partnered with [in addition to Rittenhouse] Indiana Farm Bureau and Moses Caregivers, to put this on,” Simpson said. “Indiana Farm Bureau is involved because they are into cars, as well as Moses Caregivers, who have aa great connection with a lot of car clubs. And we do it here at Rittenhouse to give the residents another opportunity to go out and enjoy the day.”

And enjoy the day they did! Residents and guests enjoyed food, the raffle, and the Competition part of the Show. There were three categories, each with their own trophy- Peoples’ Choice, where the public, including Rittenhouse’s many residents in attendance, could vote on their favorite car, The Chamber Award, awarded by the Chamber’s staff, and the Mayor’s Choice, where the Mayor James Snyder chose his favorite vehicle.

Robert O. Johnson, a 94 year-old resident of Rittenhouse, whose daughter and son-in-law owned two of the cars in the event, was having a great time, as he has at the two previous Car Shows.

“It’s entertaining for me,” Johnson said of the event. “I got a son-in-law with two cars out there.”

His daughter, Ruth Jones, was enjoying the day with her husband and father.

“My husband and I have been going to car shows since 1965,” said Jones. “We enjoy the camaraderie. I know probably just about 60 percent of the guys who are out there right now.”

This car show isn’t just about community outreach for the Chamber and Rittenhouse; to these hard-core car enthusiasts, it’s also about showing off their loving craftsmanship and providing lasting memories for all who view their cars for years to come.