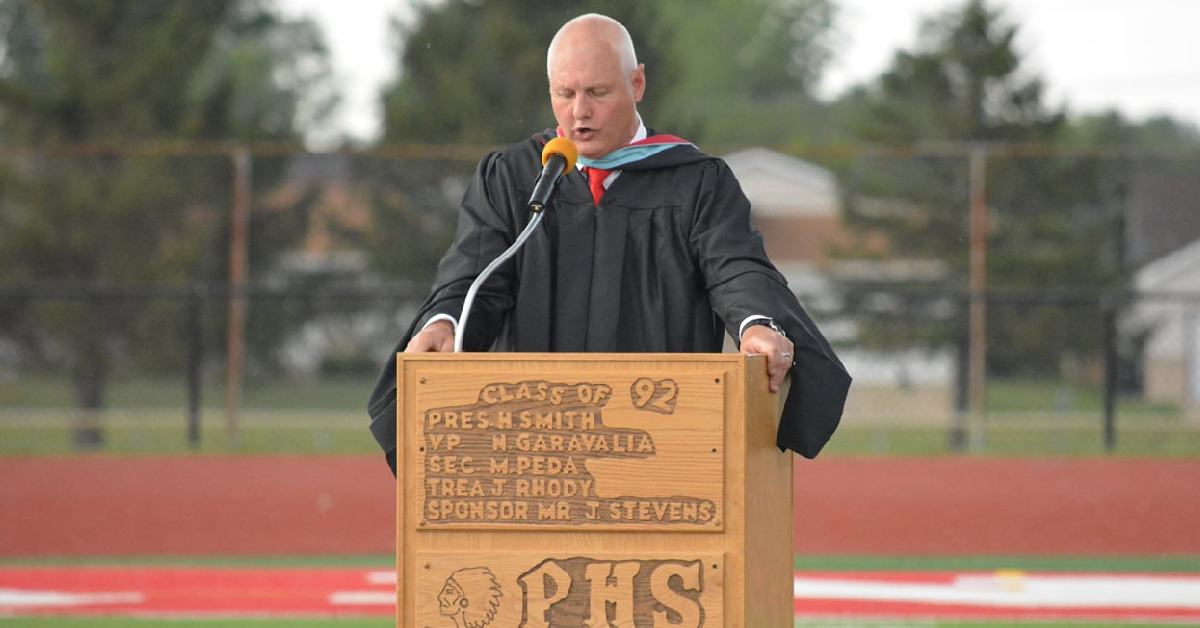 Portage High School and Portage Township Schools have been impacted forever by the work done by Max Gill.

Gill was interested in everything at Portage. He went to sporting events, music concerts, theater performances, art shows, and anything that involved his school. He made sure every single student knew they were supported by someone.

The community and his school family are mourning Gill’s passing on Nov. 29, and remember him fondly for his dedication, commitment, and overall positive demeanor.

Some students dread going to school, but not the students at Portage. Gill’s fun activities, jokes, and meaningful relationships inspired students to learn and succeed. Whether it was releasing students a few minutes before that final bell or helping play in the pep band at basketball games, Gill was always there for everyone.

Anthony Maletta is a senior at Portage High School and considers Gill an important person in his life.

“Mr. Gill is one of the greatest men I have ever met. I always knew no matter what that I could go to him and he would help to the best of his ability,” Maletta said.” His presence in the halls and genuine care for every student helped elevate the culture at PHS. He truly wanted the best for every student and would make students his number one priority all of the time. His commitment to the success and excellence of students was incredible.”

Gill always had a smile on his face and a laugh that made everyone’s day better. Students looked to his Twitter account for school cancellations, jokes, and news. Gill loved to find ways to connect with students on a level that they felt comfortable. He was respected at Portage for his ability to help students through problems in or outside of school, and guide Portage in the right direction.

He was a very funny person to be around and loved to laugh with students at lunch or in the hallways. Many of the students close to him would refer to him as “Maxwell,” which made him chuckle, and then he’d correct them with, “Excuse you, it’s Mr. Gill.”

Lexie Cipich graduated from Portage in 2018 and remained close with Gill even after she left PHS. He was a mentor for Cipich and helped her during her time at PHS.

“Mr. Gill meant everything to me. He treated me like his own daughter and I never thought I could get so close with someone like I did with him,” Cipich said.

“He cared more about us than just our schoolwork and as students. He impacted his students in a way that helped develop us into well-rounded young adults who will help contribute to the Portage community in a positive way.”

Gill helped teachers in their classrooms, supported them through all their situations, and helped teachers connect to students. He began as a teacher and translated that into helping his teachers at Portage as a principal.

Jodi Newby is an English teacher at PHS and experienced Gill’s compassion firsthand.

When I began at Portage, I noticed he quickly sought to learn the incoming student’s names and made Portage a welcoming place to go to school. I personally always thought that respect was a big part of his life and he respected every single kid that walked the halls of Portage High School. He truly cared about students' grades, their plans for after high school, and most importantly, them as a person. When Gill’s battle with ALS began, all the students and teachers knew that he would be strong through it. They knew he would fight, and they were there for him because he was there for them. Portage is a better school and community because of his involvement as a principal, educator, mentor, and most importantly, a friend. He will be missed by many and his legacy at Portage will not be forgotten.