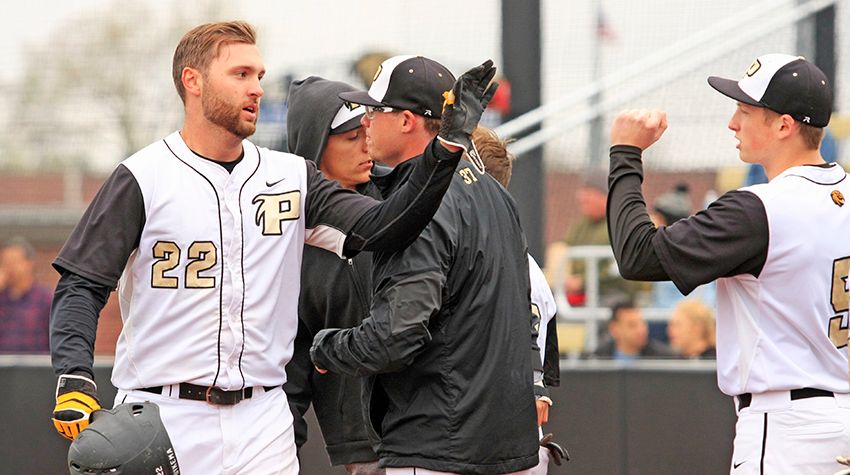 The eight-seed Peregrines (19-21) fell, 11-8, to No. 1 seed Olivet Nazarene (38-13) in extra innings Friday, but not before Purdue Calumet rallied from an eight run deficit to tie the game in the seventh.

Purdue Calumet returns to action Saturday, with a 10 a.m. CT contest against St. Ambrose, a 8-1 loser to St. Xavier, in the elimination round at Hoffer Field.

Freshman Andrew Atchison (Crown Point, Ind./Crown Point) had his best outing of the season for Purdue Calumet, finishing 5-for-6 with a double and an RBI; senior Cody Dykema (Schererville, Ind./Lake Central) was 1-for-6 with a home run and three RBI; and teammates Tyler Crussen (Valparaiso, Ind./Wheeler), Alec Skalka (Munster, Ind./Munster) and Eric Sickles (Benicia, Calif./Benicia) each had two hits to lead the Peregrine offense.

Friday, it looked like the CCAC regular-season champion Tigers had the game in the bag with a 8-0 lead heading into the bottom of the sixth inning.

But the Peregrines were far from finished. Senior Eric Sickles (Benicia, Calif./Benicia) started off what would be a seven-run sixth frame with a leadoff single, setting up teammate Andrew Atchison’s (Crown Point, Ind./Crown Point) RBI single to put Purdue Calumet on the board.

The Peregrines would get RBI hits from Crussen and Skalka, before Dykema came through with the biggest hit of the game, belting a three-run home run over the Hoffer Field outfield fence to bring the Peregrine within one, down 8-7.

After Willie Bennett (Santee, Calif./West Hills) shutout the Tigers in the top of the seventh, Purdue Calumet would tie up the game at 8-all after Atchison doubled and later scored on a Cody Moskovsky (St. John, Ind./Bishop Noll) fly ball to left that dropped for an error.

Peregrines’ reliever Matt Sandoval (Highland, Ind./Bishop Noll) would hold the Tigers scoreless through the next three innings, before Olivet Nazarene finally answered in the top of the 11th with three runs on three hits, the biggest a Ben Hill two-RBI double.

Purdue Calumet was able to load the bases in the 11th, but Olivet’s Parker Shelton was able to end it on a game-ending groundout to seal the victory.

For a full tournament bracket: http://www.ccacsports.com/article/2727.php

The eighth-seed Peregrines (19-22) led the fifth-seeded Fighting Bees (25-30) 5-1 heading into the bottom of the fifth inning, but St. Ambrose came storming back with four runs in the fifth and five more in the sixth to take a 10-5 lead.

Senior starter Phil Madvek (Hobart, Ind./Hobart) was credited with the no-decision, scattering eight hits, striking out three and gave up five runs in the five-inning outing.

Avondre Harris (Mishawaka, Ind./Mishawaka) and Tyler Crussen (Valparaiso, Ind./Wheeler) would add RBIs later in the frame to put the Peregrines up, 3-0.

Purdue Calumet would tack on two more runs in the third, when Sickles swung for the fences and connected on his first long ball of the season and second of his Peregrine two-year career, scoring two after senior teammate Cody Dykema (Schererville, Ind./Lake Central reached base on a walk.

The Bees would answer in the third with a score on a Kevin Zanger sacrifice fly, but St. Ambrose would make their biggest move in the fifth, when Greg Wymer belted a home run with the bases loaded to tie the game at 5-all on the grand slam.

The sixth inning proved to be all Bees again, as SAU got five more runs on four hits – the biggest a three-run home run by Zach Hart, to take a 10-5 lead. St. Ambrose would get two more scores in the seventh for the final score.

The Peregrines qualified for their second-straight CCAC Tournament by winning its final regular-season series of the year over Indiana South Bend, as Purdue Calumet completed just its third season as a program in 2016.