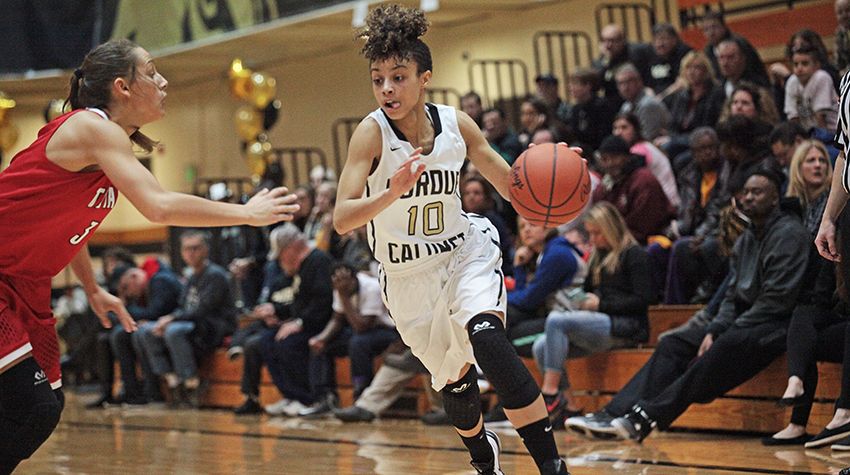 The Peregrines got off to a strong start in the first half thanks to Thompson’s lights-out shooting from behind the arc. The junior guard drained all four of her makes (4-6) in the first half, including the first basket of the game on an assist from Katie Wampler (Scottsburg, Ind.). Purdue Calumet led 22-17 after the first quarter and then 43-36 at halftime, as Deno added 14 of her 21 in the first 20 minutes.

The Titans (13-14, 7-9) didn’t go away easily, though, as IUSB executed a 11-7 run to tie the game at 50-all at the 4:20 mark of the third quarter. Purdue Calumet responded with a 9-3 run over its own, as four different players scored — capped by freshman Michaela Kikendall’s (Morristown, Ind./Morristown) layup at the 39-second mark.

The Peregrines entered the fourth frame up, 59-53, but the Titans opened the final quarter on a 7-0 run fueled by a Courtney Smith three-point play and two Sarah Rogian baskets inside to give IUSB the lead at 60-59.. That’s when Peregrine sophomore post Ellie Michalski (Mukwonago, Wis./Mukwonago) stepped up for the home team, connecting on three layups over the next five minutes to help Purdue Calumet regain the lead, as two Deno free throws made it 69-66 with 2:36 left.

Purdue Calumet closed it out at the free-throw line after that, hitting 4-of-6 from the charity stripe while holding the Titans’ offense to just two points in the final two minutes to seal the victory.

Michalski finished with 13 points and five rebounds and Wampler led the Peregrines with nine boards to go along with four points. Kikendall added eight points off the bench, plus she and Kiser each dished out four assists.

IU South Bend took the early 9-4 lead to start off the game, but a deep three-point field goal by Sebree as time expired on the shot clock put the Black and Gold within two points with 15:00 left in the opening period.

The Titans wouldn’t let the Peregrines take the lead, jumping out on a 10-0 run in the next few minutes, and leading by as much as 14 points before heading in to the locker room with a 39-26 advantage.

Junior guard Darric Obinger (Munster, Ind./Calumet Christian) would connect on a three-pointer followed by a layup to put Purdue Calumet within 7, 47-40 with 13:45 left in the game.

The Peregrines would continue to hang with the Titans, after a layup from Danny Paschen (Schererville, Ind./Lake Central) made it 56-49 with just under 10 minutes remaining.

The three-point shooting from the Titans propelled IUSB past the Peregrines, connecting on 7-of-14 from beyond the arc in the second half to lead them to the 75-63 victory.