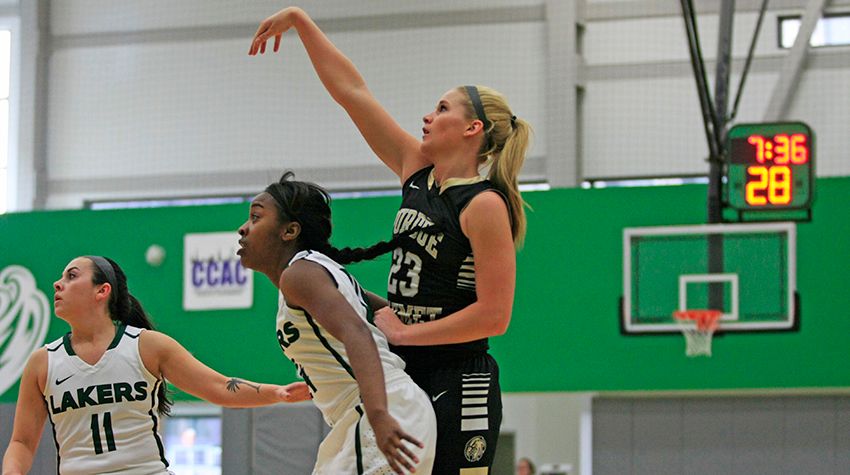 Deno Nets 39 in Purdue Calumet 104-91 Loss at Olivet Nazarene
Despite a career-high 39 points from junior Cassidy Deno, a late fourth-quarter comeback fell short as the No. 13 Purdue University Calumet women’s basketball team fell to No. 6 Olivet Nazarene 104-91 Wednesday in a battle of NAIA ranked teams.

Deno’s (Otterbein, Ind./Benton Central) 39 points were the most scored in a single game by a Peregrine player since Deno netted 33 last season in a win over Grace College. Game records weren’t kept until the 2010 season, but the mark also stands third in current history, just behind former Peregrines Tierra Turner (36 points, 2013-14) and Alex Starr (45 points, 2012-13).

Purdue Calumet (19-6, 10-5 Chicagoland Collegiate Athletic Conference) opened the game strong, nearly matching the NAIA’s scoring leading Tigers (20-4, 13-2) in the first quarter, as the Peregrines trailed after one, 27-25. Host ONU rattled off 32 more points in the second quarter to take a 59-51 halftime lead, as the Tigers capitalized off 14 Peregrine first-half turnovers with 21 points.

Deno scored 22 in the first half before the Peregrines struggled to score in the third frame, as ONU held Purdue Calumet to just 13 points in the third period to take what seemed like a commanding 82-64 lead heading into the final 10 minutes. That lead surged to as many as 21, 89-68, with 7:56 left before a Jessica Kiser (Noblesville, Ind./Noblesville) 3-pointer stalled the Tigers offense and led to a 23-9 Peregrine run over the next seven minutes. Katie Wampler (Scottsburg, Ind./Scottsburg), who finished the game with 19 points, scored eight in that stretch – including a three-point play – and Darien Thompson (Anderson, Ind./Anderson) added four points.

Deno hit two triples herself, and her two free throws at the 1:15 mark made it a seven-point game, 98-91. But the Tigers would go on to hit 6-of-6 free throws down the stretch – all from leading scorer Abby Hengesbach, who finished with 32 points – to seal the home win.

Thompson finished with 12 points and seven assists and Deno was a board shy of a double-double with nine rebounds, a team high. Sophomore Ellie Michalski (Mukwonago, Wis./Mukwonago) added eight points and eight boards off the bench and Kiser added seven points, five assists, four rebounds and two steals to round out the Peregrines’ leaders.

For the Tigers, Maggie Schmidt added 12 points, Tori Lemke had 10 and Hengesbach added seven assists. ONU, which leads the NAIA in scoring at 110.1 points per contest, saw 16 players reach the floor.

Purdue Calumet shot 55.7 percent (34-of-61) from the field for the game compared to 46.9 percent (38-of-81) for Olivet Nazarene, and the Peregrines dominated on the boards, 41-22. But ONU forced Purdue Calumet into 35 turnovers that led to 39 Tiger points, while the host committed just 14 giveaways.

The Peregrines were led by freshman Chandler Spring (Covington, Ind./Covington) who connected on 4-of-6 from beyond the arc for a team-high 16 points.

After ONU jumped out to a 12-7 lead to start off the opening period, Spring would connect from downtown to put the Black and Gold within two, 12-10, with 14:27 left in the half.

The Tigers held a 38-29 advantage over the Peregrines with 2:23 remaining in the period, but the Black and Gold would end the half on a 7-0 run, making it 38-35 heading in to the break.

Purdue Calumet stayed within single digits with the nationally ranked Tigers for the majority of the second half, chasing three points with 8:23 left in the game thanks to a pair of made free throws by Ronald Karenzi (Kampala, Uganda/Rock Creek).

ONU would break open their lead though, after CCAC player of the week Aaron Larson notched his fourth 30+ point game in five games to lead the Tigers to an 81-65 win over the Black and Gold.