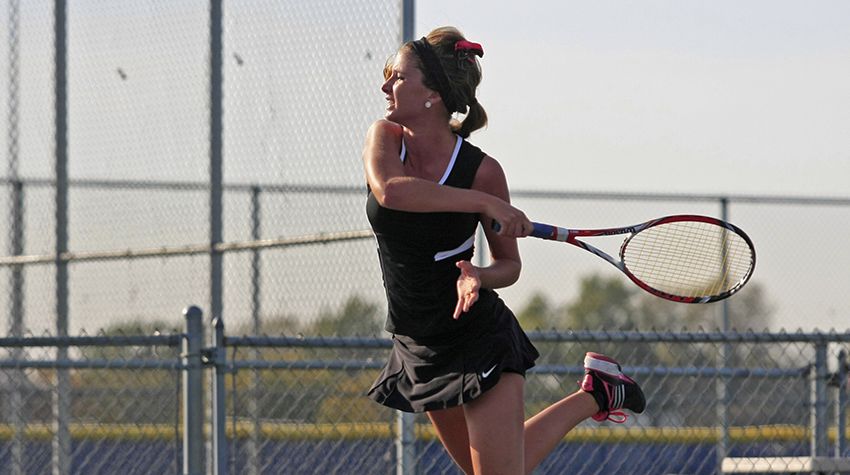 The Peregrines captured victories at No. 1, 3 and 6 singles to go along with wins at No. 2 and 3 doubles.

Purdue Calumet returns to action on Mar. 29, when they take on Olivet Nazarene to kick off Chicagoland Collegiate Athletic play at 2:00 p.m. (CT).

At No.3 doubles, Will Harber (Michigan City, Ind./Michigan City) and James Newman (Orland Park, Ill./ Oak Forest) were able to capture a game against SJC, dropping the 8-1 decision to Samir Shammas and Joseph Comerford.

Purdue Calumet returns to action on Mar. 19, when they take on Roosevelt to kick off Chicagoland Collegiate Athletic play at 9:00 a.m. (CT) at Dowling Park.

Deno (Otterbein, Ind./Benton Central) was one of 10 student-athletes from around the country to be named to the CoSIDA Academic All-America College Division Team, which includes athletes from NAIA, Canadian and two-year institutions. Deno was the lone junior selected to the first team, which amassed a cumulative grade point average of 3.86 GPA and featured four seniors.

The junior guard led the nationally-ranked Purdue Calumet women's basketball team to its fifth-straight 20-win season, as the Peregrines finished the season with a 22-8 overall record. Purdue Calumet is currently awaiting a possible at-large bid to the NAIA Division II National Championship, with the Selection Show set for March 2 at 5 p.m. CT.

Deno is averaging 19.1 points per game for the Peregrines, which ranks third in the Chicagoland Collegiate Athletic Conference. She adds 6.7 rebounds, 2.2 assists, 1.6 steals per game and has been lethal from 3-point range, where she shoots 41.0 percent with 178 makes on the year. Deno adds a 88.2 percent clip at the free-throw line (142-161) and shoots 42.4 percent from the field in 30 starts on the season. A two-time CCAC Player of the Week selectionin 2015-16, Deno joined the Peregrines' 1,000-point club back in November.

In the classroom, Deno is majoring in Hospitality and Tourism Management with an emphasis in Fitness Management, and carries a 3.78 GPA.

Union's (Ky.) Lydia Nash, a senior, was selected as the College Division Academic All-America Player of the Year.

The 2016 CoSIDA Academic All-America Men's and Women's Basketball Teams, which include College (NAIA and Two-Year Schools); NCAA Division I, NCAA Division II, and NCAA Division III divisions, are voted on by the College Sports Information Directors of America and recognize the nation's top student-athletes for their combined performances athletically and in the classroom.

Nominees must be at least a junior status both athletically and academically, be at their respective institutions a minimum of one calendar year, be a starter or important reserve, and carry a minimum 3.30 cumulative GPA.