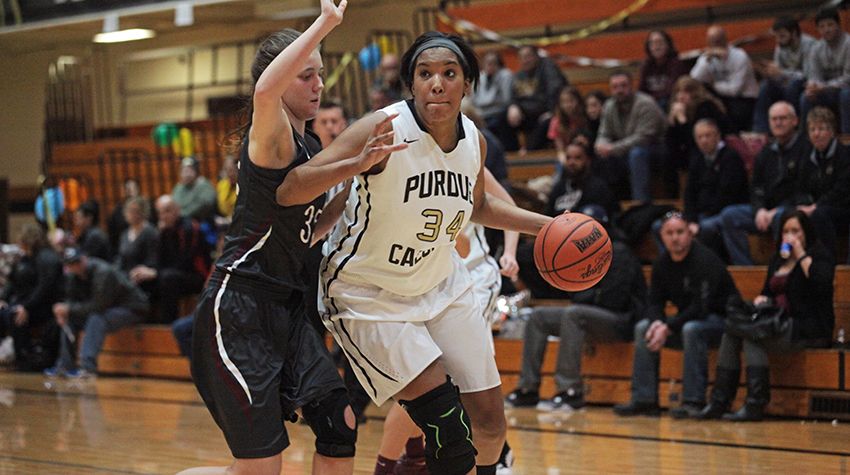 McBee's Career Performance Lifts #16 Purdue Calumet to Win at Trinity Christian
Patrice McBee put together perhaps one of the best performances of her career to lead the No. 16 Purdue University Calumet women’s basketball team to a 71-62 league win at Trinity Christian College in a game that was much closer than its final score.

McBee (Monterey, Ind./Culver Community) poured in a career-high 29 points on perfect shooting, finishing 12-for-12 from the field and 5-for-5 at the free-throw line. She added 10 rebounds for the 29th double-double of her career and the Peregrines’ all-time blocks leader finished with two to round out the Peregrines’ final game of the regular season.

Purdue Calumet finishes the 2015-16 regular-season campaign with a 22-7 overall record and 13-6 mark in CCAC play, as the Peregrines stand in sixth place in the league standings, with most teams finishing up regular-season play Feb. 20.

The CCAC Tournament, which takes the top eight overall teams, is set for Feb. 23.

Peregrines’ junior Cassidy Deno (Otterbein, Ind./Benton Central) finished with 16 points – hitting all eight of her free throws – as the Peregrines finished perfect as a team at the charity stripe: draining all 31 attempts. The last time Purdue Calumet was perfect at the stripe was during the 2013-14 season, when the Peregrines made all 22 attempts in an 87-80, CCAC regular-season title cinching win against Calumet St. Joseph.

Katie Wampler (Scottsburg, Ind./Scottsburg) rounded out Purdue Calumet’s leaders, recording her third double-double of the season with 12 points and 15 rebounds, tying a career-high for boards.

The teams played an even 17-point third quarter, thanks to the Trolls’ continued hot hand, as the host made 8-of-17 shots from the field in the third frame. McBee, meanwhile, carried the Peregrines offensively in that frame by scoring 11 points and Deno added six, all from the charity stripe.

Purdue Calumet wouldn’t pull away until late in the fourth quarter, when the Peregrines built a six-point lead, 63-57, with 2:23 to play after two Deno free throws. TCC’s Bethany Jansma answered, draining a triple and an ensuing steal and layup made it just a one-point game, 63-62, with 1:46 left.

But it was McBee again, as Darien Thompson (Anderson, Ind./Anderson) drew the defense and found the senior center for her final two points to give the Peregrines a slight three-point cushion. The Trolls would finally go cold, missing their final seven attempts from the field and Purdue Calumet went 6-for-6 from the free-throw line to seal the win. Purdue Calumet dominated the boards, 50-32, but couldn’t hit from 3, finishing 0-6 from behind the arc. Trinity Christian drained 5-of-7 3-pointers and forced the Peregrines into 17 turnovers compared the Trolls’ nine.

Senior forward Ryan Rader (Lombard, Ill./Willowbrook) only shot seven times from the field, but scored 21 points thanks to a career-high 13 free throws to lead all scorers.

Both teams struggled to find the basket in the first ten minutes of play, with the Trolls leading 9-8 with 10:02 remaining in the opening period.

The offense began to pick up later in the half, with the Peregrines taking a 23-17 advantage on a made layup from Spring.

The Trolls would cut their deficit to three as the half winded down, after a trifecta from David Buffham made it 29-26 in favor of the Black and Gold.

The Trolls would try to climb back midway through the final half but the Peregrines would continue to answer Trinity Christians comeback efforts to come away with the 74-59 victory.

Purdue Calumet returns to action on Saturday, Feb. 20 when the face off with Purdue North Central at the Fitness and Recreation Center. Tip-off is set for 3:00 p.m.(CT).​