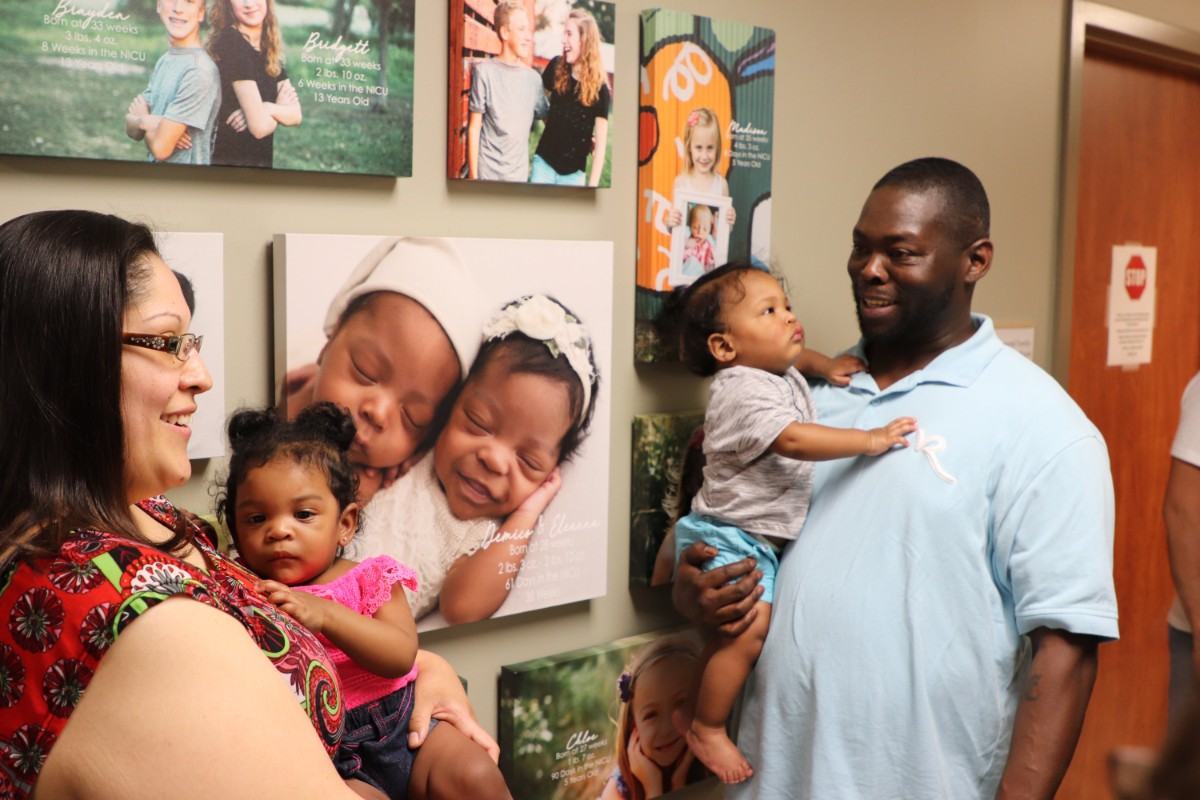 When parents have a baby in the neonatal intensive care unit (NICU), their hearts may be heavy as their little ones fight to get healthy and stronger – some weighing only slightly more than a pound. At Porter Regional Hospital’s NICU, hope lives, in a stunning photography exhibit featuring NICU graduates who have grown to be happy, healthy, and strong. The display is an uplifting reminder for parents that there is hope for their tiniest bundles of joy.

Porter unveiled the Hope Lives Here exhibit in the NICU with a ribbon cutting and private open house for NICU graduates and their families on May 23. The exhibit was installed in the winter, but staff opted to wait for the flu season to pass before inviting families for the unveiling.

The professional photos of the NICU graduates – of various age ranges, and some holding photos of themselves as tiny babies during their NICU stay – were the brainchild of neonatal nurse Maria Carlisle.

“It can get dark here sometimes; there are a lot of tears. Moms are scared, dads are scared. They can only hear so much of what you’re saying when you tell them that it’s going to be OK. So the visual impact this has, of seeing a child on the other side of it, who has gone through the journey - it helps them,” Carlisle said.

According to the Centers for Disease Control and Prevention, roughly one in 10 births across America in 2016 were preterm, also known as premature. With premies, a number of problems can occur, such as breathing troubles and feeding difficulties. Porter’s Neonatal Intensive Care Unit – the first in Northwest Indiana – offers highly-skilled physicians and nurses, and leading edge equipment to care for their tiniest patients.

Knowing the emotional challenges parents can face, Carlisle and her colleagues on the NICU reached out to professional photographers Krystal Shaw of Krystal Shaw Photography, Becca Malmquist-Timpe of Malmquist Photography, and Miranda Wilkening of Purple Peony Photography, who each donated their time, talents, and canvases for the exhibit. The photographers said they were overwhelmed at the number of families who were willing to participate if it meant helping other parents find hope.

Rachel Best, whose three daughters are NICU graduates and have a place in the exhibit, spoke from here heart after touring the gallery.

“It’s amazing to see. We’ve walked down that hallway plenty of times when it was empty and it’s a lot of anxiety being away from your children,” Best said. “To see other people go through it, and see the children who have faced and gone through the challenges yours are facing is uplifting and hopeful.”

Her daughter, Hannah, and Best cut the ribbon to unveil the gallery.

Best said parents who experience the care of the NICU form a family, with each other and the nursing staff. “You are going through this together at the most vulnerable time in your life; that’s why we as a family wanted to share our story,” she said. During the open house, Best met a mom whose daughter is in swim class with hers, and she didn’t even know that the family was a NICU family as well until that evening. “There’s an instant connection,” she said.

Being on the wall is a lot more than a simple source of pride for the families. It means that they can bring hope to the people going through the same trying time they did. They might never meet the families who will walk those halls in the future, but knowing their children’s stories will serve as a light at the end of the tunnel is more than enough for them.

“It’s amazing. It feels good to be able to give somebody hope,” said Kristina Picasso, mother of twin NICU graduates Eleanna and Demico Smith. “When I went through it, I was a nervous wreck. I thought my babies weren’t going to make it. Being able to see something like this would have helped so much.”

For the nurses and staff looking on, seeing families laugh and smile as they explored the gallery encapsulated everything about why they work so hard and passionately.

“We’re so proud of this unit, and thankful for the trust that these families place in us for taking care of their kids,” said Sean Dardeau, Market CEO for Porter Health Care System. “Providing a unique service that brings their children home to them is so important to us. They’re excited about their relationship with the hospital, and we appreciate their trust in letting us care for their loved ones.”