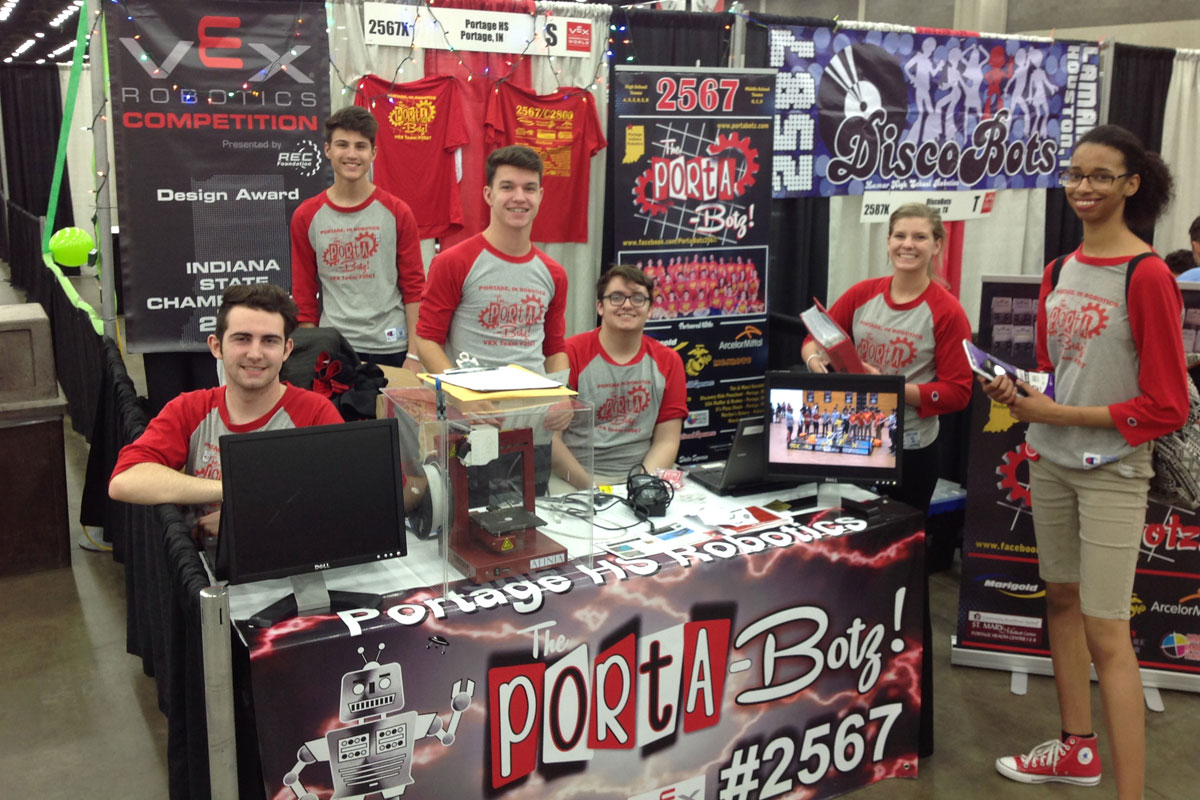 Portage Robotics is comprised of 50 middle and high students, all with unique talents, who come together in specific roles to make up 8 Porta-Botz! teams. Opportunities and roles for students include: design, fabrication, programming, CAD, data collection and analysis, documentation, 3D printing, driving, strategy, marketing, research, scouting and more. Students teams have been working since the start of the school year to solve this year’s VEX Robotics Challenge, “Starstruck.” VEX is the nation’s premier educational platform for STEM and Robotics. Starstruck challenged student teams to design robots to hurl large foam jacks and cube pillows across a 12’ x 12’ arena, over a fence, and climb a pole at the end of the match. The game could be described as a fast-paced, chaotic game of volleyball. 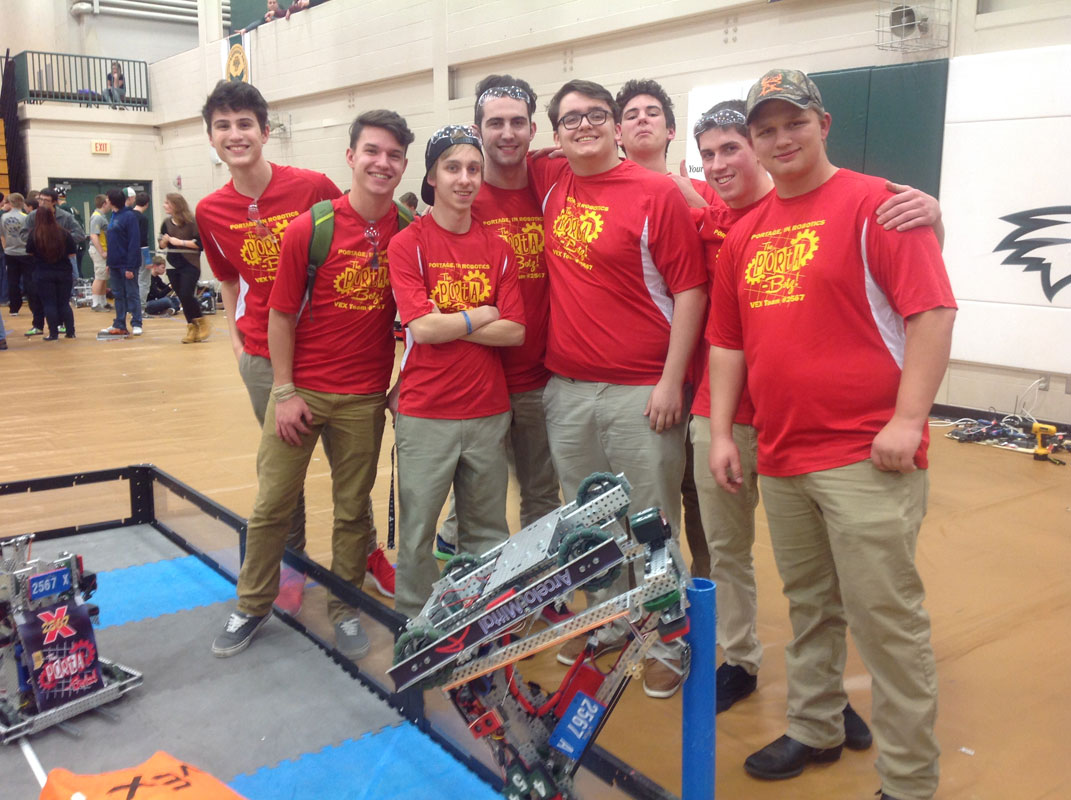 State
Portage Robotics qualified 7 teams for the Indiana VEX Robotics State Championships on Feb. 24th, 2017. 4 teams auto-qualified by winning tournaments during the regular season and the other 3 teams received invitations based on their state ranking. The field featured 64 of the state’s best robotics teams. The “Porta-Botz!” high school team 2567-X earned State Championship honors winning the state’s "Design Award". Team members were: Seniors Mikey Sobczak and Chris Schafer, and Juniors Connor Edwards, Payton Bailey, Josh Meiss, and Tyler Flatz. The “Design Award” as described by VEX Robotics is based on:

“The team who best demonstrates an organized and professional approach to the design process, project management, time management and team organization. The team’s engineering notebook is a clear, complete documentation of the team’s design process. The winning team is able to describe how the students implemented an efficient and productive design process to accomplish the project goals." 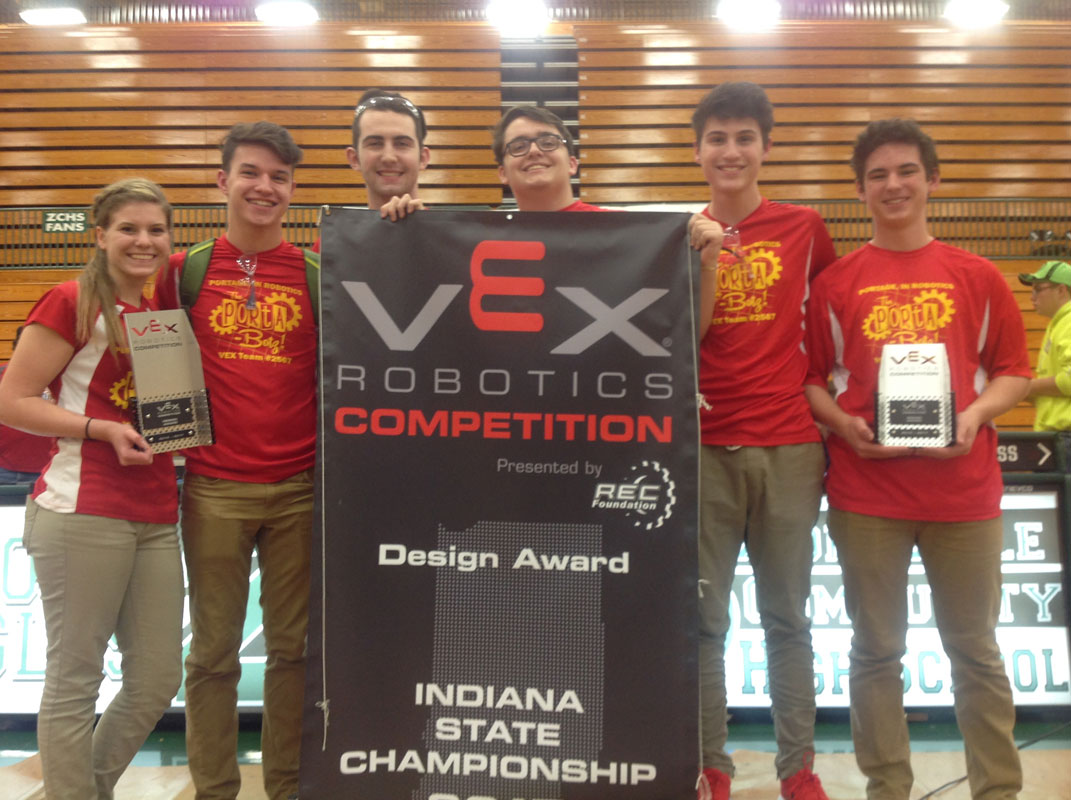 This is the second year in a row the “Porta-Botz!” has received this honor to qualify for this year’s World Robotics Championships in Louisville, Kentucky in April.

During “alliance selections”, Portage Robotics had the distinction of being the only school in the state to have 2 teams in the Top 8 who were allowed to choose alliance partners for the elimination rounds. After selecting one of their other teams, the Porta-Botz! had three in the headed to finals (Teams K, A & X). With Portage Robotics teams on opposite sides of the bracket, the excitement was building with the possibility they could meet in the championship round. In the end, the 3 Porta-Botz! teams tied for 3rd place in the State after being eliminated in the semifinals. Team-K was one win away from the championship being eliminated by the eventual State Champion. 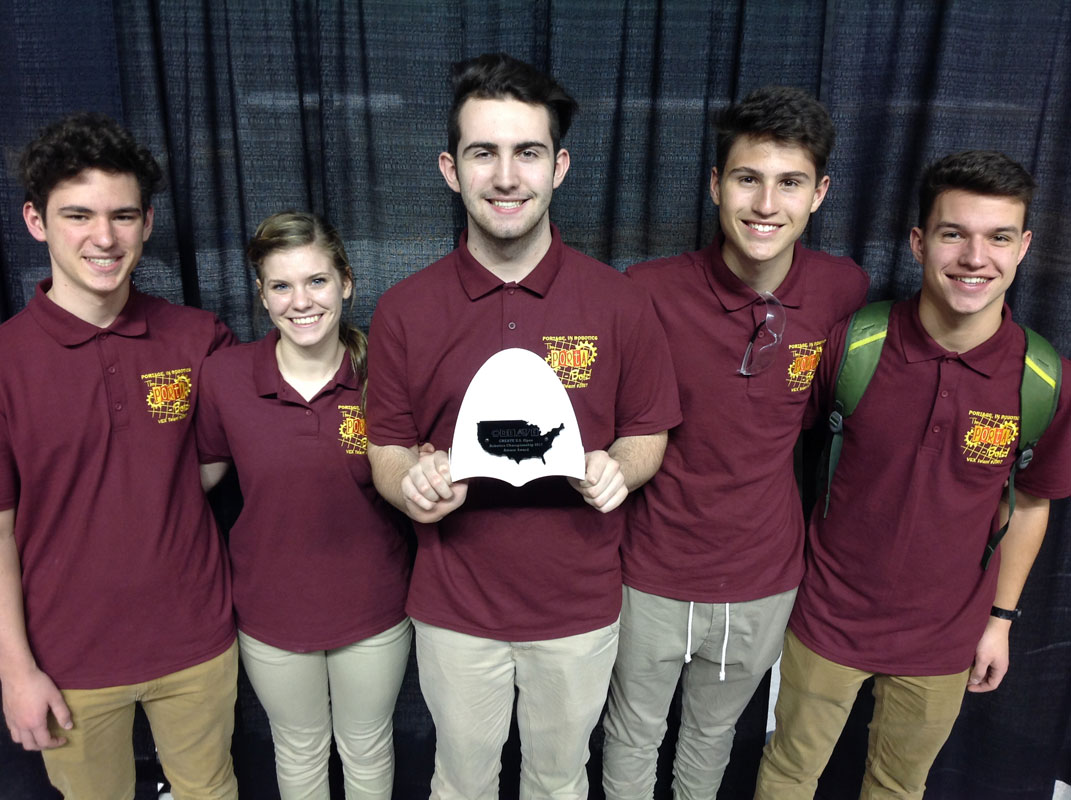 Nationals
Portage Robotics returned to Council Bluffs, Iowa to defend their National Title at the CREATE US Open Robotics National Championships April 6th through 8th. The Porta-Botz! were represented by 2 teams in the High School division and 3 teams in the Open division. 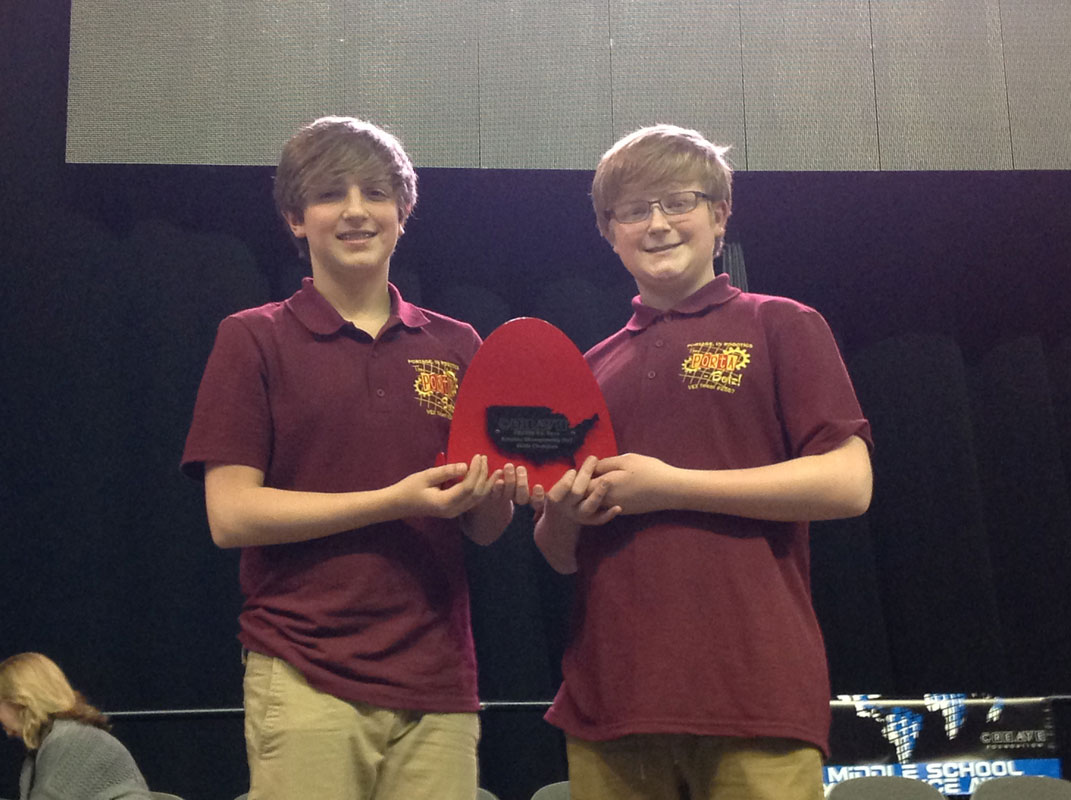 Middle School Team 2567-K, Myles and Grant Kappes, were National Champions, winning the Open Division "Skills Challenge" for scoring the highest points in Driver and Autonomous control of their robot. 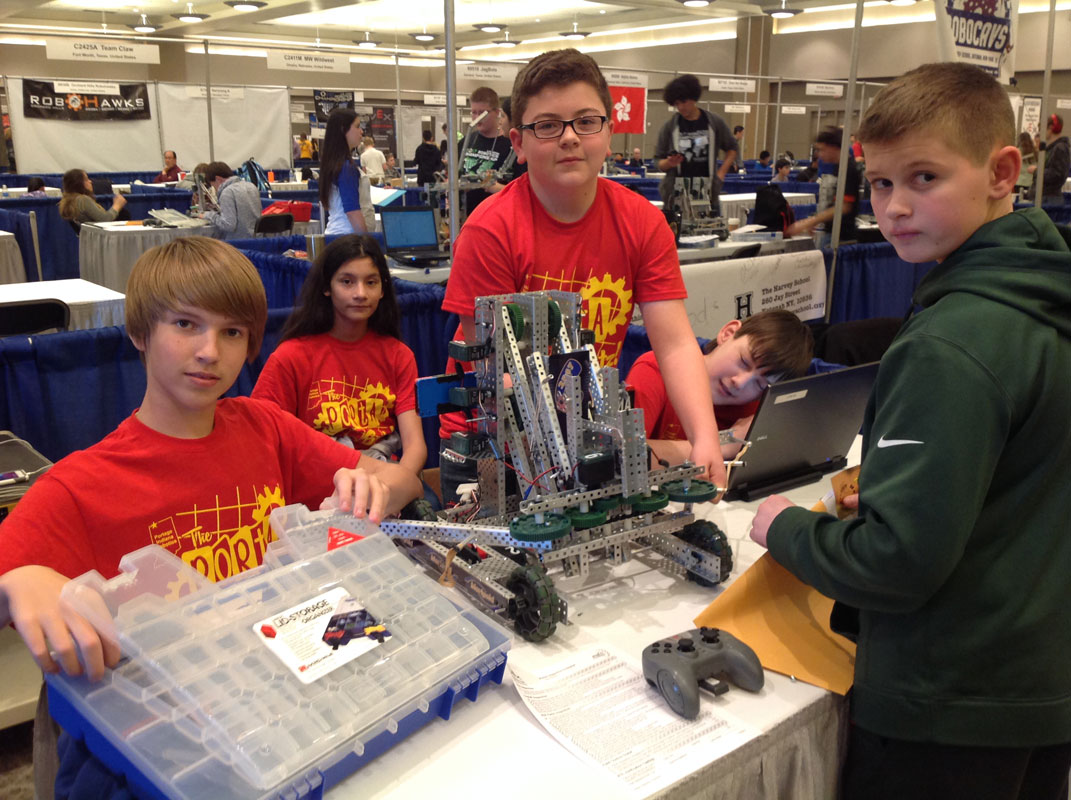 After 10 rounds and 2 days of qualifying matches, 4 of the 5 Porta-Botz! teams did well enough to advance onto the elimination rounds. In the final tournament standings, 4 teams earned national places for the Porta-Botz! 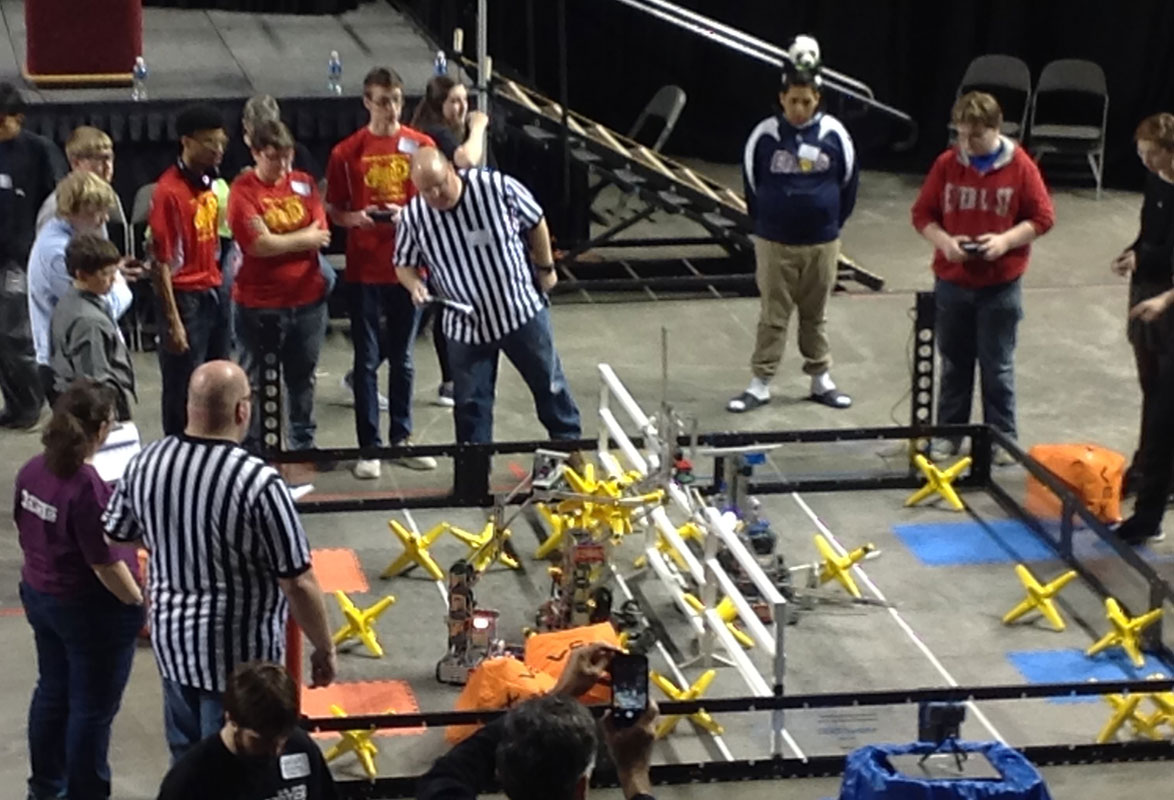 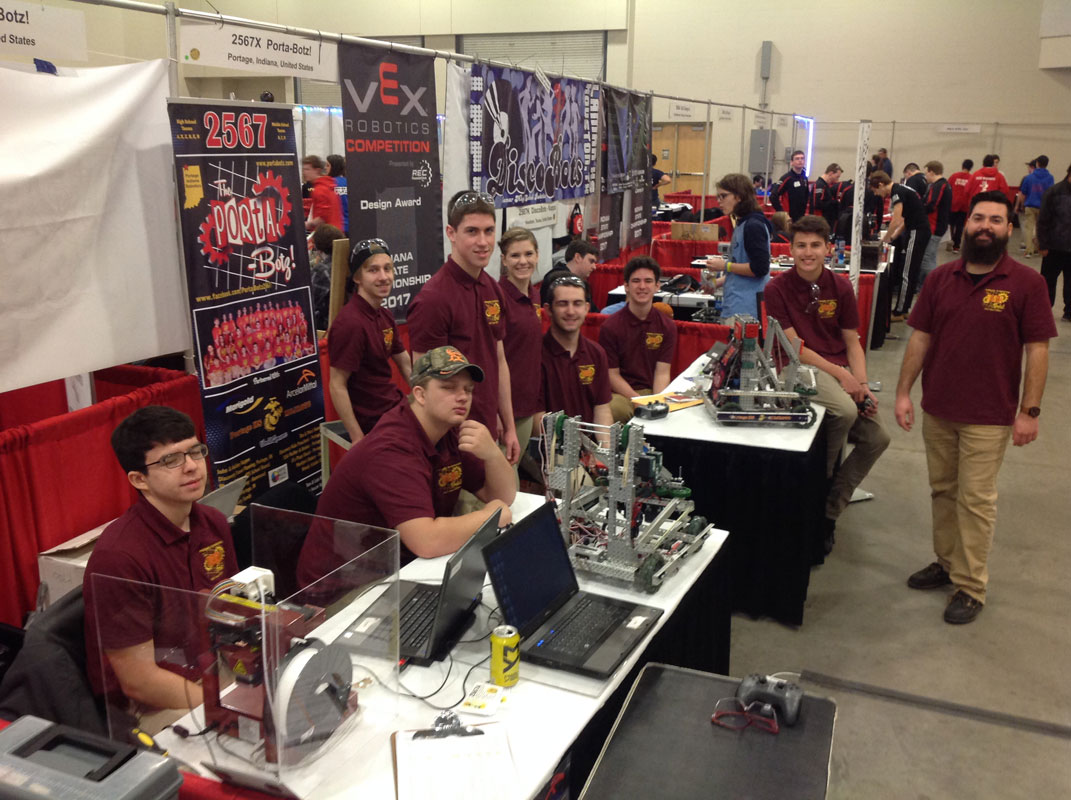 As ambassadors for the Portage community, the Porta-Botz! received numerous compliments from judges, volunteers and the event organizer for their performance and conduct as an entire team. And, the support from a large contingent of parents who traveled along made the teams feel at home. 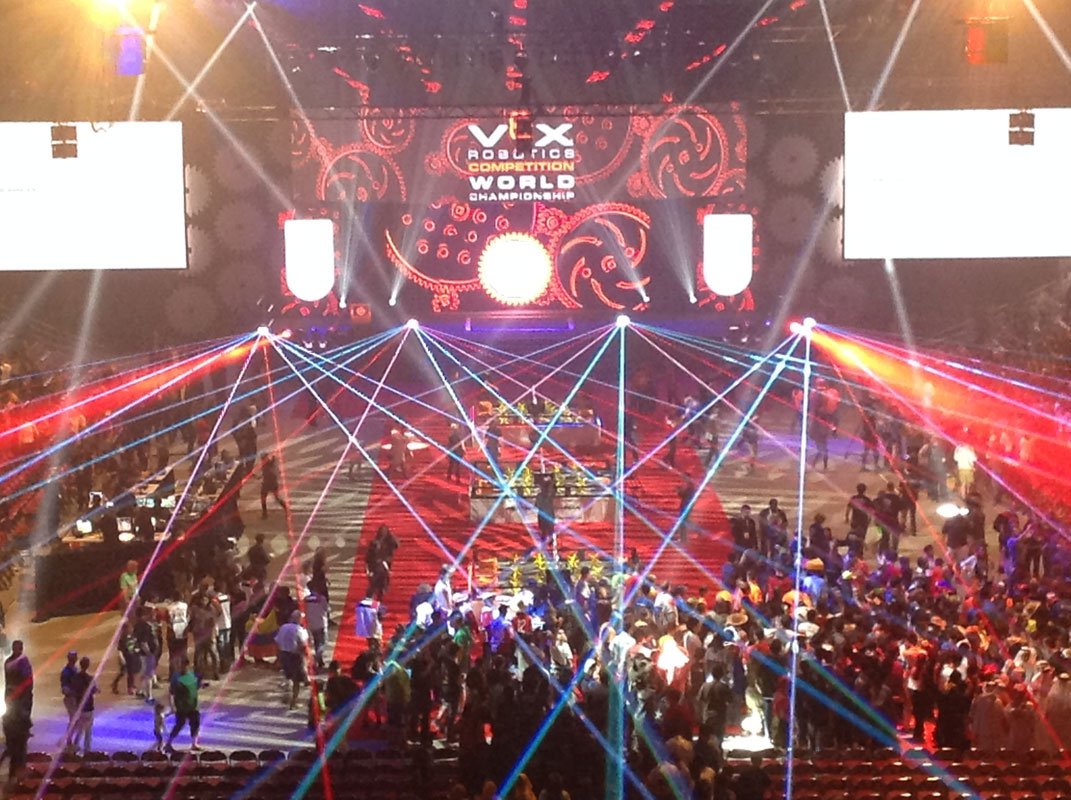 Worlds
Louisville, Kentucky was host to over 1500 robotics teams from 40 different countries for the VEX World Robotics Championships, April 19-25. It was declared the largest robotics competition in the world and the Porta-Botz! had the privilege of representing Northwest Indiana and the Portage community. Team 2567-X, Connor Edwards, Mikey Sobczak, Payton Bailey, Josh Meiss, Chris Schafer and team manager Mireina Keith got off to a fast start winning the first 5 matches in qualifying rounds. The team finished 8-2 after 3 days of qualifying and were the 8th seed advancing onto the elimination rounds. In the quarter-final rounds, the Porta-Botz! were eliminated by the eventual Champion and only undefeated team in the division. 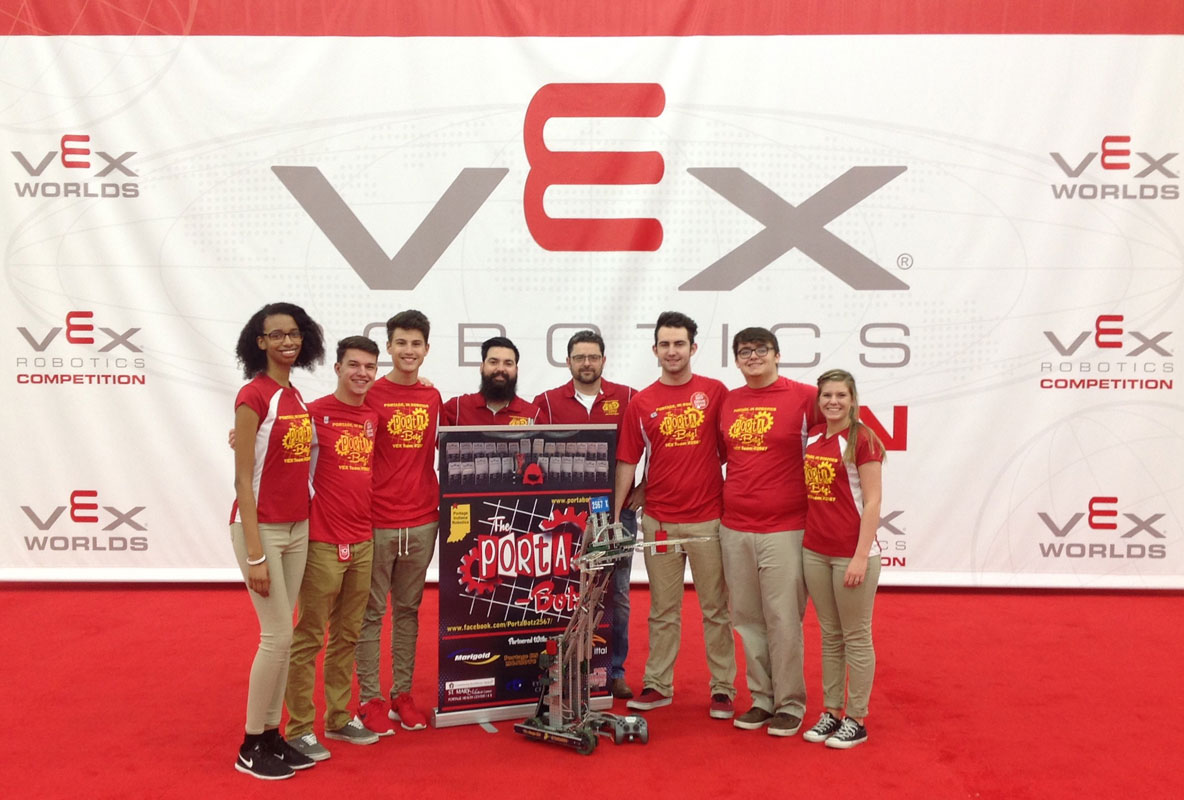 Highlights of the World tournament included The Porta-Botz! being partnered with teams from China, New Zealand and Puerto Rico. Communication was not a barrier with all teams speaking the language of robotics. Senior Mike Sobczak represented the Porta-Botz! and the USA by walking in the Parade of Nations in the open ceremonies. Students also enjoyed interactive exhibits with college recruiters, Northrop Grumman, Maker Space, Battle Bots, HexBug, US Army Bomb Robots, UPS and more. 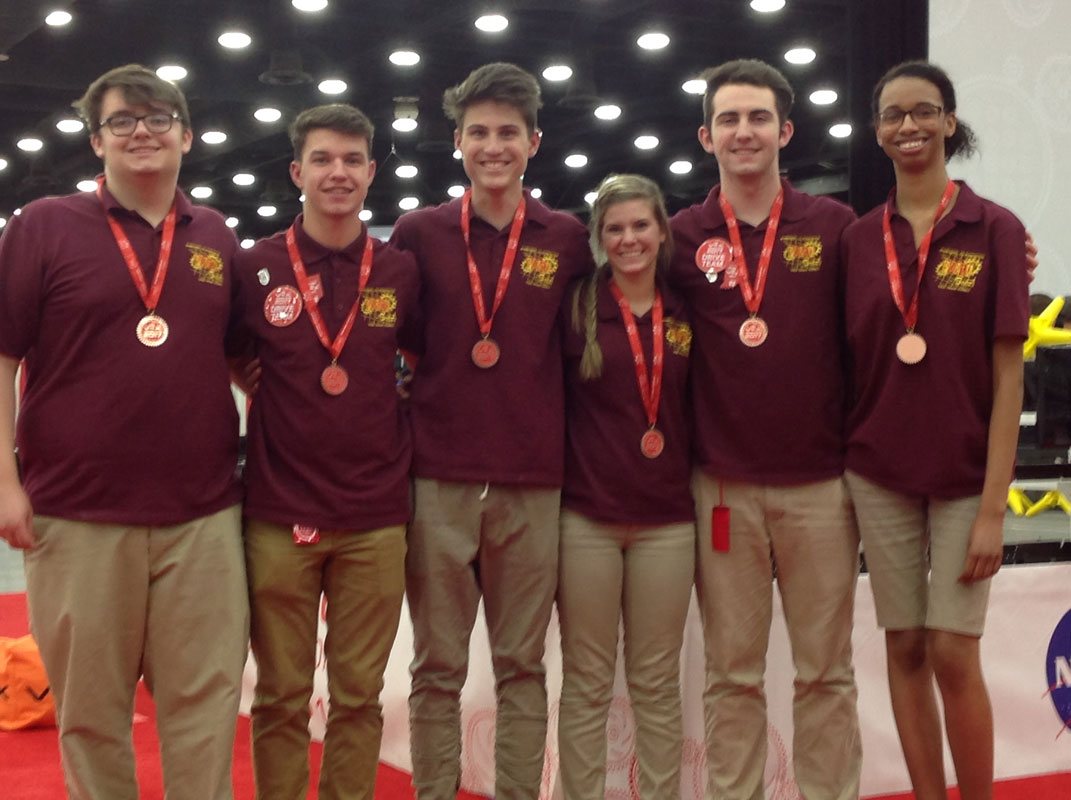 The conclusion of the World Championships brought a close to a very successful season for Portage Robotics. In all, the Porta-Botz! amassed 18 Trophies in 9 tournaments including: Tournament Champion, Excellence, Design, Judges, Sportsmanship, and Skills Awards. 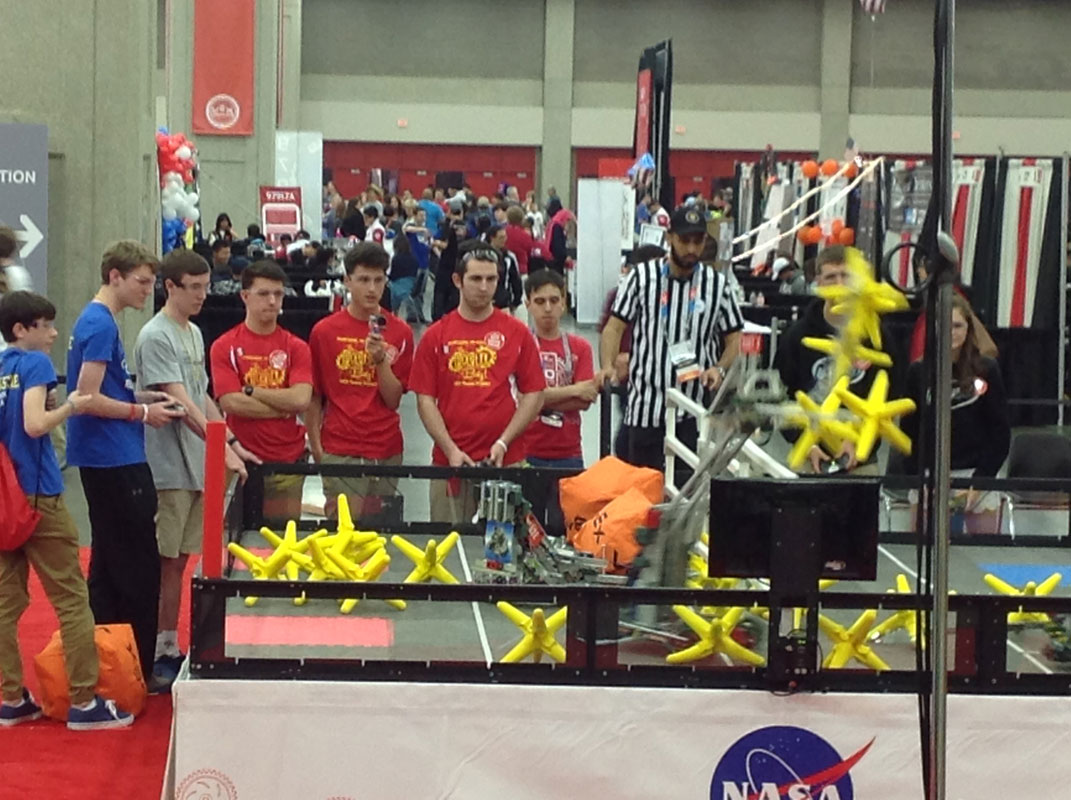 Robotics Education
For the Porta-Botz!, robotics is much more than building robots for competition. Being part of the team builds character, leadership, resiliency, and confidence while developing creativity, problem solving, time-management, communication and collaboration skills. Team members sacrificed lunch periods, long after-school hours, weekends, and vacations to ensure their goals were accomplished. Portage Robotics is also a big advocate for STEM education in the community. Members performed countless hours of mentorship to the districts’ elementary and middle school robotics students. 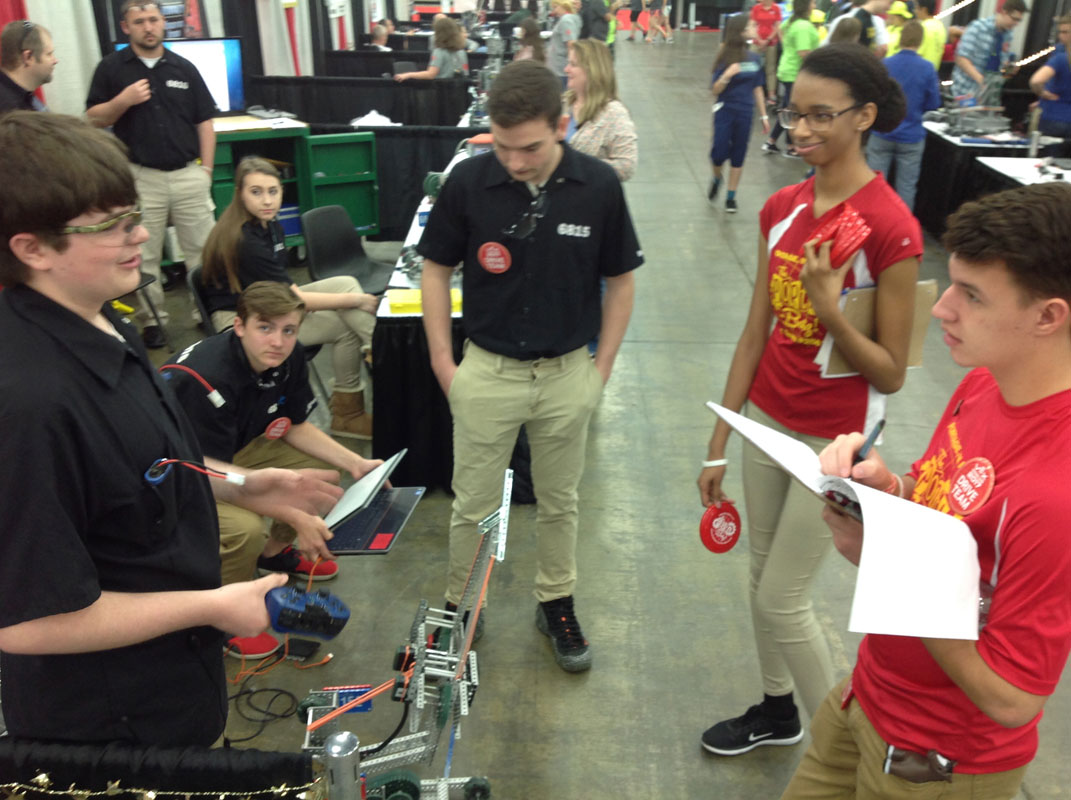 Teams have taken their robots on the road for field trips to lower grade levels, a “mid-week mixer” demonstration for the Portage Chamber of Commerce, marched in the school parade, and presented at School Board meetings. As a team, the students raised over $15,000 in funds from community partnerships, sponsorships, raffles and community nights at local restaurants. Building these relationships was just as important as raising the much needed funds. And, those funds created many opportunities and long lasting memories for kids. In addition, Robotics and STEM education has opened up post-secondary college, career and scholarship opportunities for graduates, as several are currently pursuing Engineering, Engineering Technology, and Teaching degrees at universities or technical schools. 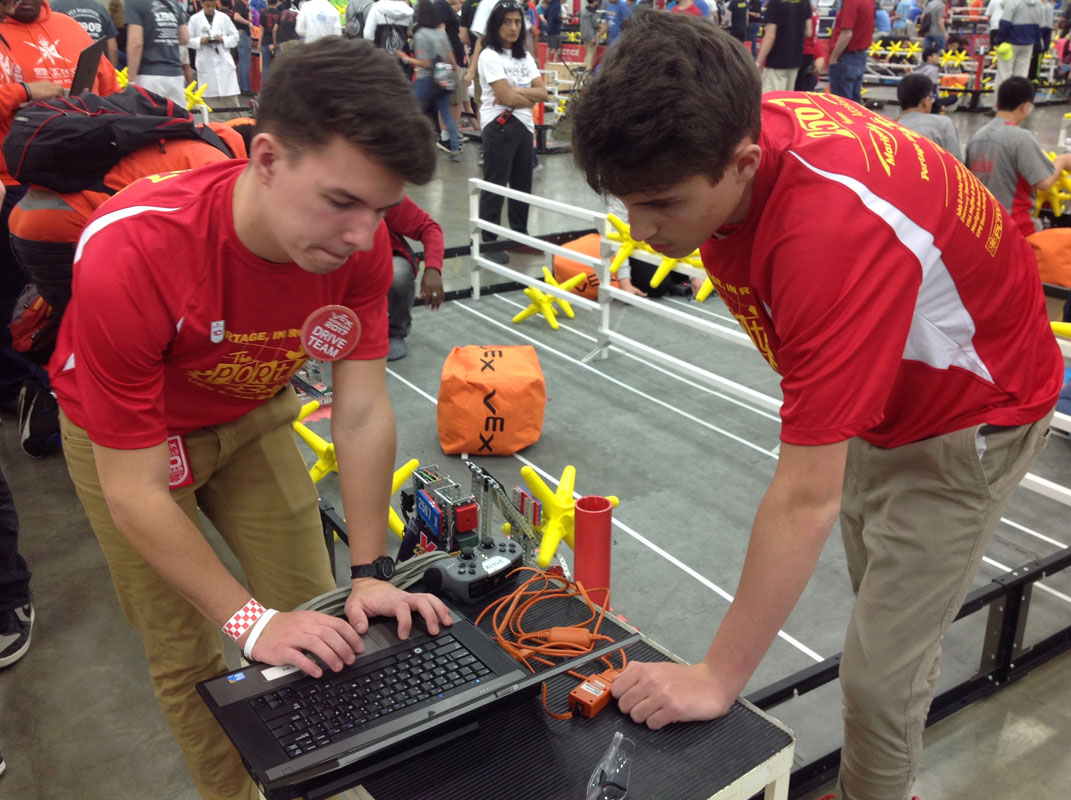 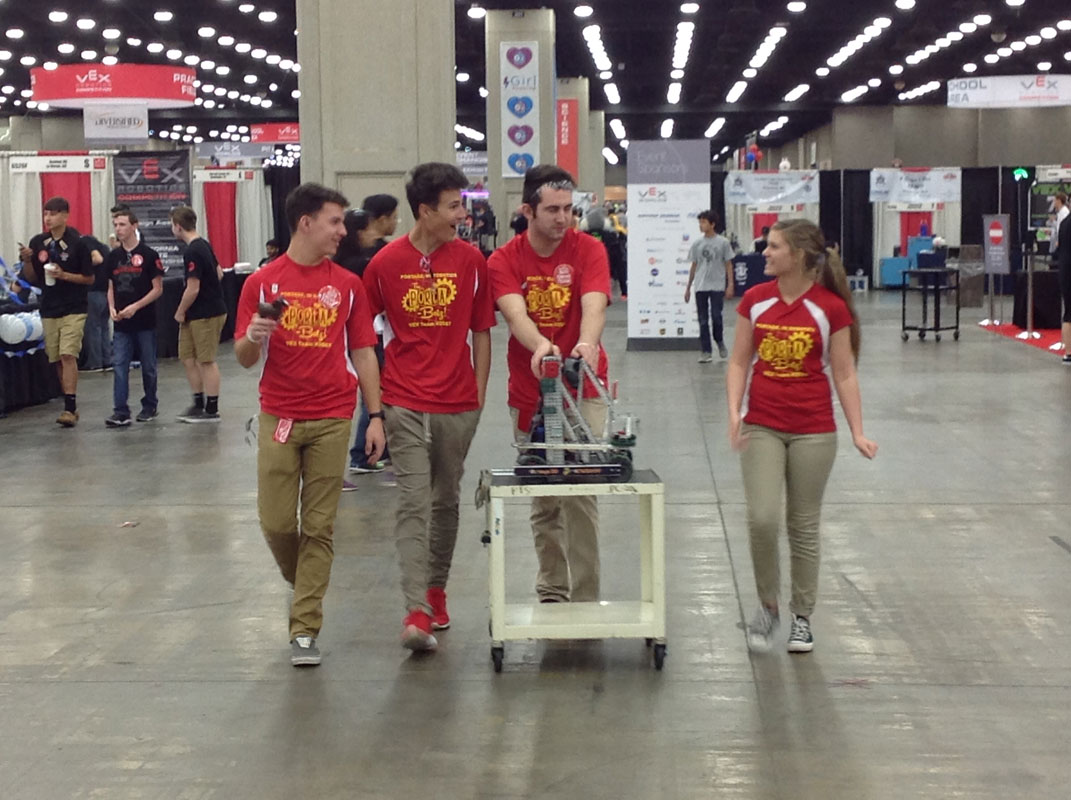