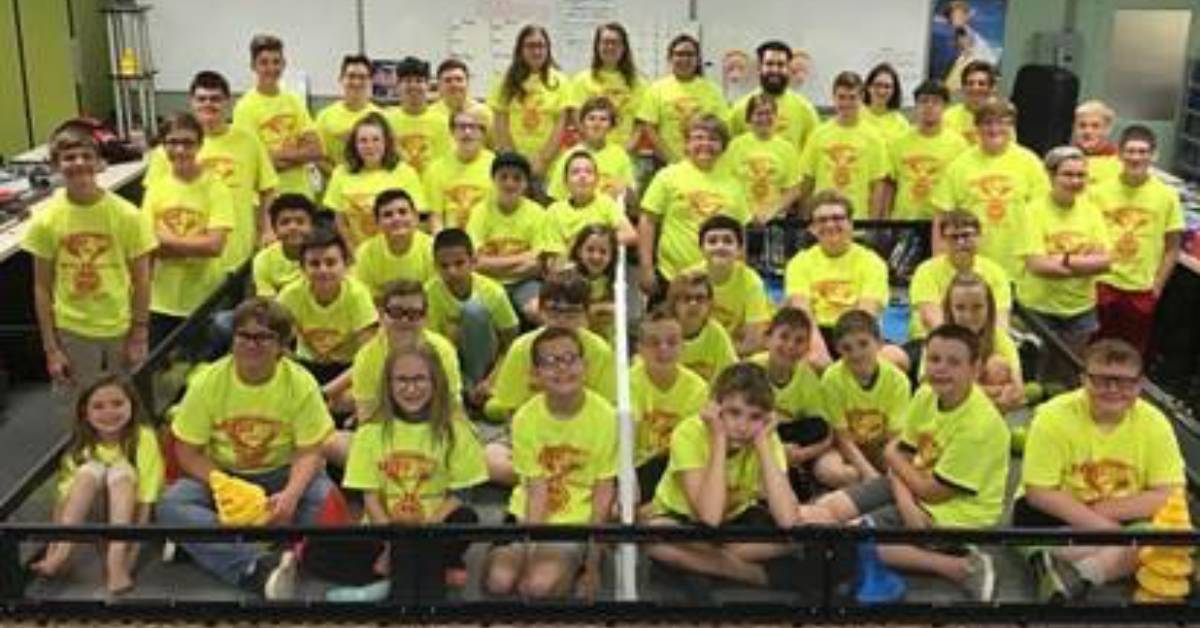 Young robotics enthusiasts from Portage Township Schools got minds-on and hands-on at this summer’s Robo Camp hosted by the award winning “Porta-Botz!” robotics team.  Campers, ranging from 5th through 8th grade, enjoyed a variety of robotics challenges.  For four and half hours each day, the youngsters learned from a talented group of State and National Champion, and World award-winning camp counselors, making for a great experience.

Day 1 was all about robot "talk" and robot "walk". The “PBJ Sandwich” activity had kids rolling with laughter emphasizing the relationship between programmer and machine.  Learning the difference set the stage for the programming challenges to come.  The “Human Maze” challenge had kids collaborating and developing logic skills in writing and role-playing out their codes.  To end day one, campers got hands on with “Reverse Engineering” by turning former robots into a pile of parts helping familiarize them with structure, motion components, sensors and various robotics equipment.

On day 2, campers were introduced C-based line coding to successfully control the robot’s movement.  Students experienced both computer simulated and real-world challenges discovering the important differences between the two.  Next, to learn forward and reverse behaviors, campers solved the “Basketball Drill” challenge.   The “Labyrinth” challenge was up next and students explored turning maneuvers.  Participants were grouped by ability level so all could experience success at their own pace.  And, more experienced campers were introduced to programming “Functions” to advance their coding skills.  The day concluded with Camp Counselors celebrating the successes they witnessed throughout the day.

Day 3 saw the introduction of the "Encoder" and "Sonar" sensors giving a new dimension to the control of the robots.  Campers caught on quickly making code teaks while demonstrating the persistence and stamina needed to problem solve.

Ultimately, robots behaved more accurately and the “Bat Bot” challenge was solved.  In addition, campers got creative solving the same problems with different coding approaches.  A group of capable programmers further advanced their skills to include "variables" for more efficient coding.

Day 4 brought an end to an amazing week!  Several campers tackled the difficult “Robo-Dunk” challenge, Game Controllers were “mapped” giving students wireless driving control of their bots, and all kids competed in a 3 on 3 “Battle Bot” game trying to out-score their opponents.

Camp concluded with families on hand for a student-led “Showcase” and the awarding of “Certificates of Achievement”.  With the outstanding guidance from counselors, the curious and capable campers achieved so much!

Robo Camp also piloted a “Leaders in Training” program for younger, more experienced robotics students who both participated in activities and led the younger campers through challenges.

Similar to cadet teaching, the Leaders in Training shadowed the more experienced counselors and took turns assisting the younger campers, all with the purpose of becoming STEM leaders in the future.