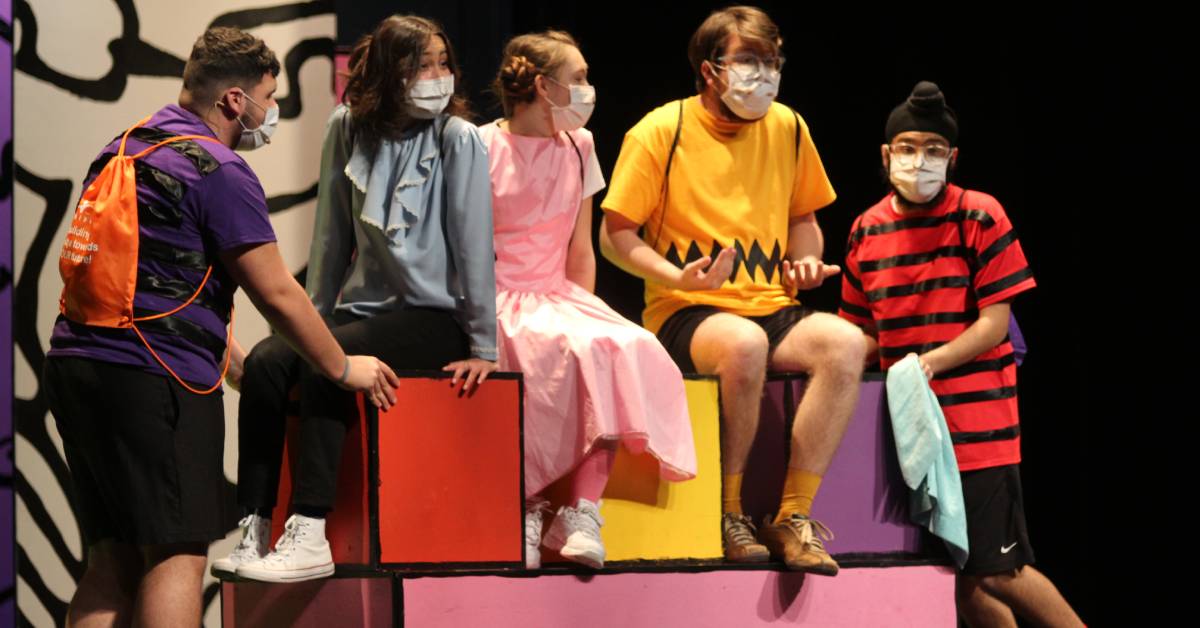 Portage High School Thespians took the stage on Friday night to debut their spring performance, “You’re A Good Man, Charlie Brown.” With music and lyrics by Clark Gesner, the classic 1967 musical brings the Peanuts characters to life with song, dance, and a simple but very dynamic stage.

When the PHS Thespians directorial team was deciding on their spring production, “You’re a Good Man, Charlie Brown” stood out among the crowd of options for both practical and sentimental reasons.

“We chose this back in December back when the school was all virtual,” said Mahaffa Thompson, Director/Technical Director for PHS Thespians. “We just didn’t know how many kids would turn out, so we knew we needed a smaller show and this has a cast of six. It has Schulz’s stamp of approval, the writing is really great. There was a revival in 1998, and it’s actually my husband’s favorite musical.”

Thompson, along with Pit Director Drew Rhoda and Vocal Director Jordan Dollins, all worked with smaller groups of students than usual – a unique dynamic for a team that usually organizes large scale productions.

“I’m usually all about stuff the stage and pit full of students, because this is an experience that some of them will only get in high school,” Thompson said. “But this time, because there were so few of them, we became really closely knit and I think with COVID-19, a lot of us actually wanted that kind of community.”

With just six actors to work with, Thompson was able to work closely with her students to prepare them for playing some of America’s most iconic cartoon characters. Minutes before he took the stage, Matthew Rodda, a senior who plays Charlie Brown, shared his confidence in stepping into the role.

“There’s quite some pressure living up to being Charlie Brown himself, but I think this comes pretty naturally to me,” said Rodda. “I’m going to go out there and people aren’t going to see me, they’re definitely going to see Charlie Brown. Yes, I am nervous, but we’ve been practicing so much – I think it’s going to go smoothly.”

“You’re a Good Man, Charlie Brown” is Mariana Verduzco first high school performance. She had joined Thompson’s theatre class last year, which inspired her to audition for last spring’s performance, but COVID-19 put a hold on that. Now, the junior is starring as Lucy Van Pelt – a role she thinks suits her very well.

“I do have some of her aspects, I’m kind of crabby and have some attitude,” she joked. “I think opening night’s come together well, and we’re going to do great.”

If you missed opening night, you can still see PHS Thespians take the stage Saturday, April 24, at 7 p.m. The show will also be available April 25 from 2 p.m. to 10 p.m. on portagethespians.anywhereseat.com.