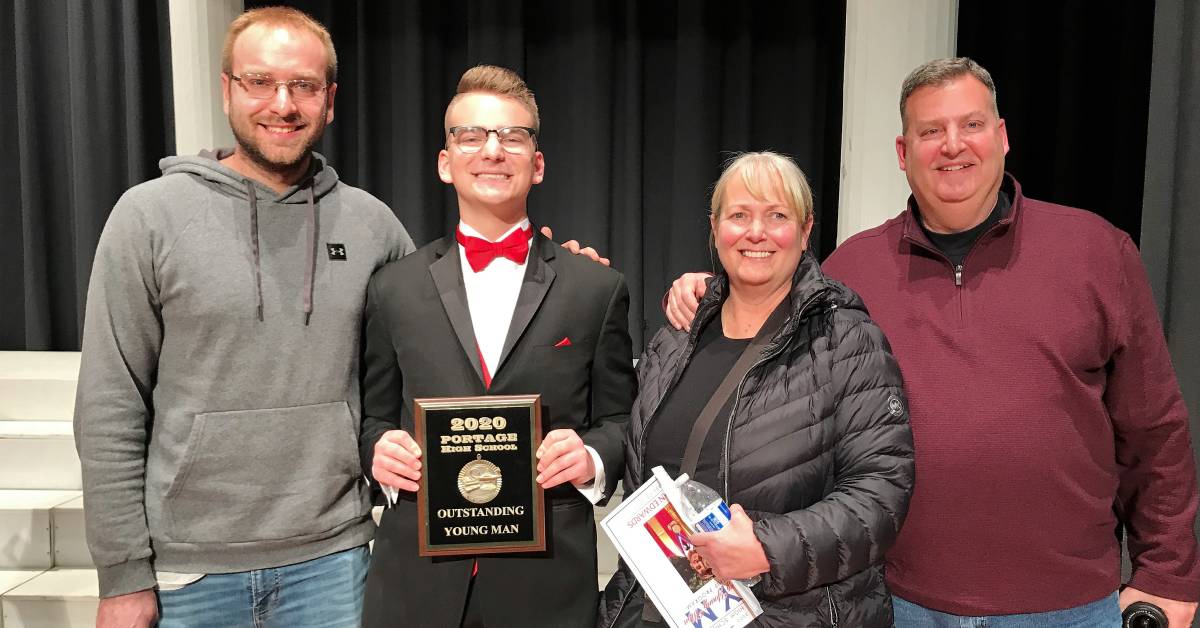 The 29th annual Outstanding Young Man (OYM) Scholarship Program event was held tonight at Portage High school. While most would think participants would have been nervous, they were boasting nothing but smiles and were brimming with anticipation.

“I’m just excited,” said Anthony Maletta prior to the start.

Maletta has seen his three brothers participate in the past and his sister was a prior Outstanding Young Woman winner. Despite that, he was not feeling pressured.

“It’s been a good time meeting new people and strengthening bonds,” said Maletta who will be attending Butler University in the fall to study marketing.

“This means a lot. I see these guys in high school but don’t really get a chance to talk to them,” said Ables. “The school is very large, so it’s cool to bring people you do know and some that you don’t for one final senior event.”

Ables was honored to be a part of the OYM program, designed to recognize the accomplishments of young men who are seniors at Portage High School. The participants were judged through interviews, academics, a physical segment, casual presentation, and a presentation with address.

Kyle Baugh was encouraged by one of his teachers to participate. While he was hoping to come away with a scholarship, he was looking forward to the physical segment.

“For about a month, we have met twice a week and sometimes on Saturdays,” said Baugh. “It’s been a process.”

Baugh is attending Vincennes University aiming for a degree in criminal justice.

Baugh’s mother, Jennifer Fehlman was most looking forward to seeing her son participate in the physical segment, but she wished more young men had come out and competed.

“This is an amazing opportunity for these young men,” said Fehlman before the event. “They have a chance at a scholarship.”

The highly anticipated physical segment was orchestrated by the Outstanding Young Woman winner Bella Marquez; She designed the routine over winter break.

“Teaching them was fun because a lot of them don’t know how to shimmy,” said Marquez. “It’s been a great experience to see the fun they had.”

Victor Ramirez was there to support his son, Victor Jr., along with the young man’s grandparents.

“It’s a big accomplishment for him,” said Ramirez. “He has worked  for this.”

While Maletta was the overall winner, he didn’t feel like he was alone in his winnings.

“Everyone who participated are the true winners,” said Maletta. “There is no one winner. Everyone is a great guy.’

Maletta’s father echoed his thoughts. Andy Maletta was excited not only for his son but for the other participants.

“It’s a great program. He’s known some of these guys since he was little, so it was fun to see them all up there,” said Andy.