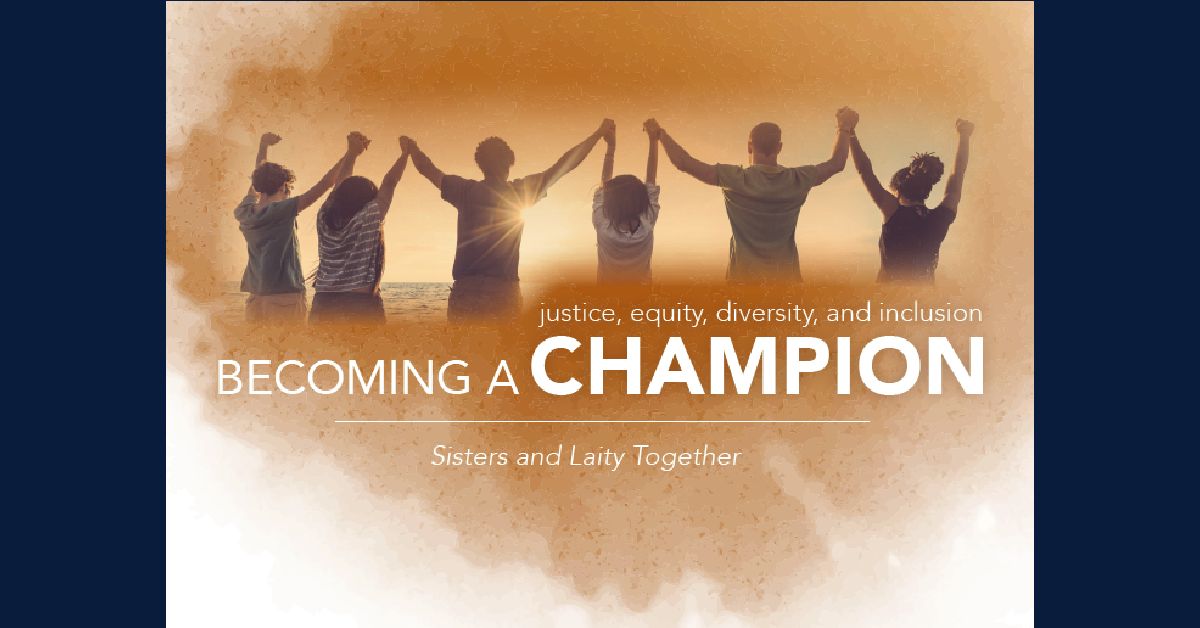 Most people recognize a champion as the one who steps up to the podium, but each champion has taken an amazing journey before ever reaching that podium. Champions must create a daily routine and experience failures and opportunities to improve before reaching champion status. Most of the time we only see the final glorious moment, but it’s a head, heart, and way of living that gets the champion to the podium. As lay people and PHJC Sisters we are being called to be champions of justice, equity, diversity, and inclusion (JEDI). Do you want to be a JEDI Champion? Let’s explore how we together are all doing this work! In the summer of 2020, as the echoes of police brutality and scourges of racism awakened our daily routines, PHJC leadership in solidarity with the Leadership Conference of Women Religious, announced their province statement on racism and their commitment to address systematic racism. I took this to heart as the Executive Director of Relational Services, as a skilled dismantling structural racism trainer, and as an African American women transformed into a JEDI Champion. The engagement of “Structural Racism Dialogue Discussions” began weekly as either socially distanced in-person sessions or hybrid presentations at The Center at Donaldson. This engaged coworkers, residents, leaders of ministries, and Sisters who wanted to commit to the lens of racial equity and justice.

This is the JEDI Champions way of daily routine, refusing to give anyone an excuse to not understand racism, bias, microaggressions, Jim Crow, Black Lives Matter, or any of the racialized truths and mistruths Sisters and Laity Together BECOMING ACHAMPION justice, equity, diversity, and inclusion By Arleen Peterson | Executive Director of Relational Services Word Gathering Spring 2022

Kathleen Quinn, PHJC centers us in the values of Saint Katharina Kasper, an extraordinary example and JEDI champion.

Our JEDI speakers have inspired us like Fr. James Martin, SJ on LGBTQ issues; moved us like Rev. Smash in addressing “white supremacy”; engaged us like our Juneteenth celebration featuring the National Negro Anthem of “Lift Every Voice and Sing.” JEDI Champions create space for more external voices to root for the progress of how the Poor Handmaids are a catalyst for just transformation. Every champion needs competitors and the JEDI speakers are a healthy dose of competition to keep us moving forward and continually improving.

I’m most encouraged that racial equity training is a requirement for all new hires. We are not only training like all champions do to get to the podium, but we are also teaching and being the lifestyle example for a JEDI champion. This year, one of the three African American coworkers at The Center was not the one who led the Martin Luther King Holiday celebration. Thanks to JEDI champion Paul Mach for stepping up to the podium.

This year, we continue to engage JEDI voices – hey, it is an Olympic year! We had an amazing opening ceremony with Fr. Daniel Horan, OFM discussing his recently published book, “A White Catholic’s Guide to Racism and Privilege.” Also in January 2022 we held a showing and discussion of the documentary “13th” by Ava DuVernay, an in-depth look at the prison system in the United States and how it reveals the nation’s history of racial inequality. Perhaps lessening COVID restrictions will allow us to also visit Ferris State University’s Jim Crow Museum as the year progresses. The pursuit of becoming a champion is difficult. People often look at a champion who wins a competition and think that getting there must have been fun, happy, and maybe even comfortable. Get that out of your head. It’s not. PHJC Sisters are not taking the easy road, and neither am I. We are doing something rare that many predominantly white led organizations are not willing to do. We are engaging the head, heart, and lifestyle together – laity and Sisters. These are the choices we are making to get on the podium and to be JEDI champions.

Of what our history in America has been for Black Indigenous People of Color (BIPOC). There were many sessions in which I had thoughts of quitting, of being emotionally exhausted. In the stories that I’ve read about Olympic champions, exhaustion shows that you are pushing your limits. Like them, I needed to embrace these moments of exhaustion because the fatigue means you are becoming a champion. More than 150+ lay people and Sisters have participated in these sessions and have stepped onto the podium. As the pandemic progressed into 2021, the head work and way of living took aim as JEDI champions moved out of their comfort zones. We established the JEDI Core group which is comprised of ministry coworkers and a Sister who guides and supports JEDI. The core group identifies guest speakers, events, and strategies for implementing JEDI. Like champions who don’t always do things like everyone else, Sister Fr. Daniel Horan, OFM, spoke to The Center at Donaldson coworkers, Poor Handmaid sisters and many others on racism and privilege.

We are not only training like all champions do to get to the podium, but we are also teaching and being the EXAMPLE LIFESTYLE for a JEDI Champion.