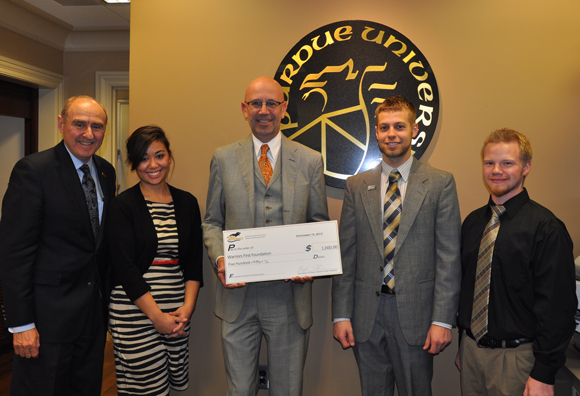 The Purdue University North Central Rotaract Club recently presented a donation to the Warriors First Foundation from the money raised through a car and bike show the group sponsored on campus.

The car show drew exhibitors and attendees from throughout the area. A silent auction also helped to bring in additional donations.

"We had a very successful car show and people were very generous with their donations," said Remington O'Guin, PNC student and Rotaract president. "Many people came for the show, but when they found out about the Warriors First Foundation, they stepped up to make additional donations."

Individuals as well as area businesses and organizations stepped forward to make donations, said Matthew Migliorini, PNC student and Rotaract vice president and car show chairperson. "Everyone involved with the show was committed to making the event a success."

The PNC Rotaract Club is sponsored by the LaPorte Rotary. Founded in 2005, the club provides an opportunity for members to address the physical and social needs of their communities and to promote better relations between all people worldwide through a framework of friendship and service.