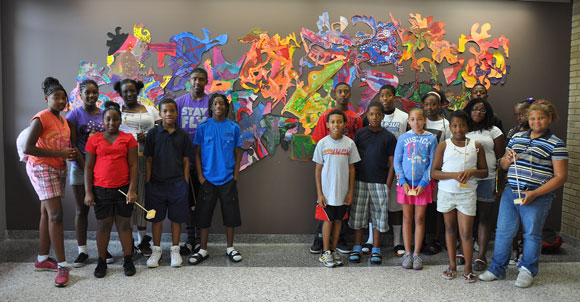 The Purdue University North Central Odyssey Arts and Cultural Events Series will present the exhibit "Pine Elementary School Salute to Sugarman" featuring artwork by 96 fourth- and fifth-grade students of Pine Elementary School in Michigan City from Aug. 20 through Dec. 21 in the first floor, north study area of the PNC Technology Building. It is free and open to the public.

Pine Elementary, Michigan City's Magnet School for the Visual and Performing Arts and the Purdue North Central Odyssey Arts and Cultural Events Series have forged a unique partnership. That partnership has resulted in Pine Elementary currently housing the wall sculpture, "Festival" by George Sugarman, on loan from the Purdue North Central collection of Sugarman's works, as well as the "Owl and the Pussycat" sculpture by Richard Kiebdaj, which has been a part of the PNC Odyssey Arts and Cultural Events Series.

The "Owl and the Pussycat" sculpture was installed in the fall of 2011 and greets guests and the student body of more than 600 as they approach their campus. A loan was underwritten by a NIPCSO grant.

The student art was created as part of Pine Elementary's year-long commemoration of the centennial of Sugarman's birth. The "Salute to Sugarman" artwork was inspired by "Festival," which is composed of 26 pieces that span a wall space 30 feet long. After viewing a PowerPoint presentation about Sugarman, the students worked in small groups to create their own Sugarman-inspired "non objective" art work. "Non objective" art does not represent or depict a person, place or thing in the natural world.

The Pine Elementary students enjoyed taking on their unique project. "It felt awesome," said Raion C. "It was just all the colors, how they sparked and how they came out. It just looked magnificent."

Haley W. echoed those sentiments, "I felt relaxed and calm because there were no directions. It was kind of neat because you just let your mind go loose."

Each student group of four to five students was responsible for designing and creating a work of art. They cut paper into freeform shapes using no more than five colors, excluding white and black. Each piece was painted, cut and glued together, with special attention paid to "positive" and "negative" space. This was an important concept to Sugarman as well, noted Beadles.

Some students attempted to put themselves in Sugarman's place while they worked. "I felt good. I felt creative and I really thought that I was Sugarman at first. It was good to do his (style of) work and to be like him," said Anise E.

This art was displayed at Pine Elementary during the dedication of the Sugarman piece.

For information about this exhibit or the Odyssey Arts and Cultural Events Series, contact Judy Jacobi, PNC assistant vice chancellor of Marketing and Campus Relations, at 785-5200, ext. 5593. Persons with disabilities requiring accommodations should contact Jacobi.