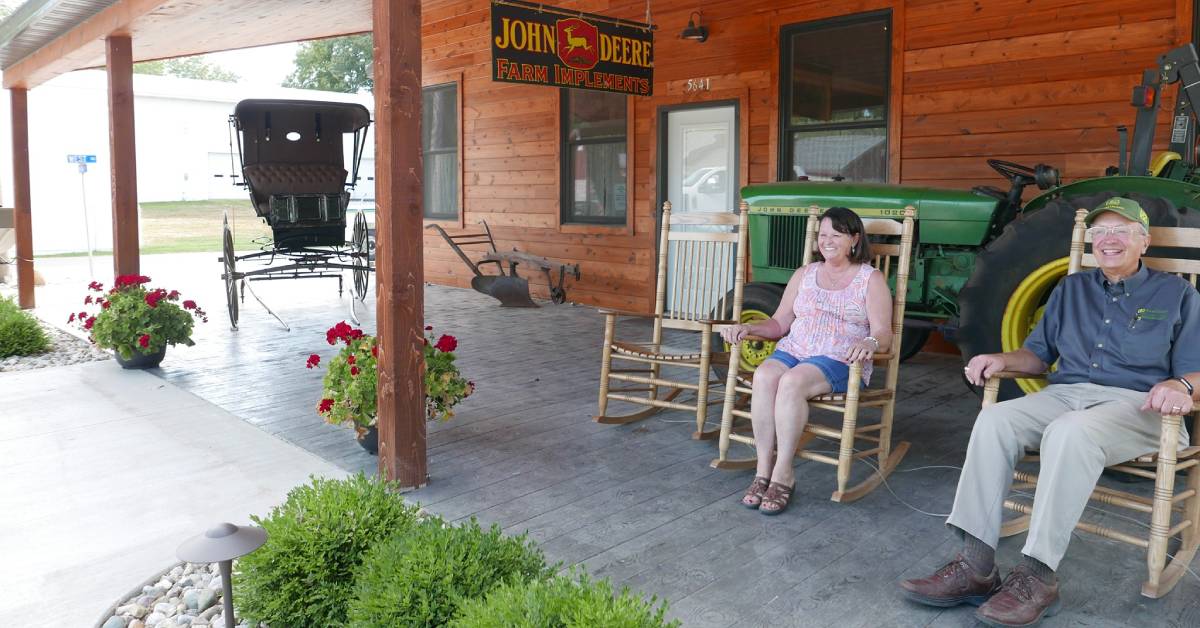 It’s only fitting that the oldest John Deere dealership in the world be accompanied by a museum to showcase the most special of antiques. Established in 2018, PJ Gilsinger & Co., operates as part John Deere museum, part all things Pulaski County. Owners Paul and Brenda Gilsinger created the museum to commemorate their family’s long standing legacy, and to give visitors and locals alike a taste of Winamac history.

Touted as the oldest John Deere dealership in the country (“Well, I suppose the world, really!” Brenda corrected herself, chuckling) Gilsinger Implement was founded on October 13, 1899 by John Shank and Joseph Gilsinger. Before it specialized in John Deere equipment, the site of the museum was a mercantile. Items saved from the dealership’s history, the mercantile’s earliest years, and keepsakes leftover from Brenda’s ancestors—Winamac settlers who built a grist mill—make up the collection on display at PJ Gilsinger & Co.

“I’ve collected a lot of memorabilia on the town from over the years,” Brenda said. “We decided we wanted to share it with the public. And truthfully, it was nice to make some more room in our home.”

But to truly comprehend the wealth of items and significance of the museum, one has to take into account the Gilsinger’s business. As mentioned, the dealership dates back to 1899 and has been in the Gilsinger family for all that time. Following a long line of predecessors, Paul Gilsinger began working for his family’s namesake at just 12 years old. He had just lost his father a year prior, and having lost his mother at the age of 3, he was taken in by his two aunts and an uncle.

Paul continued to work in his family’s store and received his degree from Notre Dame. His own son followed in his footsteps, as did his daughter, in terms of her degree.

“My husband always said that when he graduated from school, all he wanted to do was be a John Deere dealer in Winamac,” Brenda said. “And that’s just what he did.”

In 2003, Gilsinger Implement procured two separate locations, one in Warsaw and one in Plymouth. Then in 2014, the business merged with two other companies—Howard and Sons based in Monticello, Ind., and Fillmore Equipment based in Holland, Mich. The merged forces (which now cover 16 locations) became known as GreenMark Equipment. In that time, the business flourished and the Gilsingers were able to place some focus on their side project: the PJ Gilsinger & Co. Museum. So far, the Gilsingers have found that their followers appreciate the museum just as much – if not more – than they do.

“We’ve been very busy, and for that we’re thankful,” Brenda said. “We wouldn’t be here if it weren’t for the customers.”

“My husband has always prided himself on the fact that we’re always there for our customers,” Brenda said. “Farming is a whole different animal, and we’re a very close-knit community here.”

Brenda met Paul when she was working at a restaurant that he frequented. The two became close there, and their romance perfectly aligned with their families’ county roots, making them an ancestral force.

While farming might initiate the draw to PJ Gilsinger & Co., other items garner a wider curiosity. Alongside a 1954 John Deere utility tractor is a dinosaur bone that was found in the region surrounding Winamac. Alongside 1800s milking equipment is a shrunken head Paul’s uncle retrieved on an adventure in South America, and a ledger filled with records of every single piece of lumber sold in 1854. Brenda curates displays that coincide with the antique newspapers she uses for reference.

“Each piece has a story to tell,” she said. “There’s usually a newspaper article I find to go with it. Even the little weekly gossip columns they kept in those days give you an idea of the sense of that time period, and how to display items that might have represented a more prominent part of life.”

One newspaper she has on display references the famed bank robbers Bonnie and Clyde passing through the Pulaski County area.

To accommodate such Winamac town memorabilia, the Gilsingers will be making use of another vacant town store to display the items, thus leaving room for more John Deere machinery. This choice also accommodates the town meetings that have become regular occurrences in the museum space.

“We love to see all the old families and businesses work together,” Brenda said.

While still expanding, PJ Gilsinger & Co. is one of the many hidden gems that occupy Pulaski County.