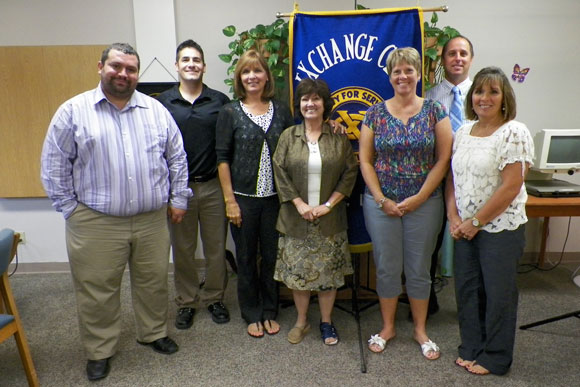 The administrative staff from Portage High School attended the August 15 meeting of the Portage Exchange Club. Each gave a brief summary of his or her background and what the present areas of responsibility are.

Principal Caren Swickard is no stranger to the Portage Exchange Club. Her father, Roy Claussen, was one of the charter members of the club, and Swickard herself was a member for many years. She received her education in the Portage system and commented, “Mr. (Mike) Lemond was my government teacher.” Lemond is Exchange Club treasurer.

Swickard has been in education for 30 years—all of them in Portage. She taught, was assistant principal at PHS, principal at Fegely Middle School and then came back to PHS as principal.

“When I started at the high school seven years ago, I asked myself, ‘Will this be a better place because I’ve been here?’ Back then 50 or 60% of our students were passing the government mandated testing. Now our math scores are in the upper 80s and our English scores just passed 80%. Then the graduation rate was 76%; now, it’s about 90%."

”I have to thank all of our teachers for that. We have fantastic teachers in the corporation—from the elementary schools all the way up to the high school."

“One of the reasons I brought my whole administrative teachers today is because a very wise mentor of mine—Dusty Rhode—told me that you have to surround yourself with good people and that will make you good at what you do. They’re great people. I’m very proud of this team. One is my sister and two are former students of mine."

”At Portage we like to hire Portage grads because we know they’re loyal and that they care about Portage and care enough about our kids to work really hard to give them the best education possible.”

Lynn Alkire, one of Swickard’s former students, is in her twentieth year of education. She attended Portage schools from fifth grade through high school. Her father was Don Alkire, former guidance counselor and assistant principal at PHS. She is the mother of three children. At the high school, she works with seniors, curriculum, testing and scheduling.

Jennifer Sass describes herself as a “Portage transplant.” She spent 23 years in the LaPorte School system at the middle school level before coming to Portage. She was encouraged to come to Portage by former LaPorte coworker, Mike Spagna.

“I love it here because of the people. The people at Portage care about kids,” Sass said.

Sass deals primarily with juniors. She is excited about a new initiative called PEAK for Portage Elevates Developmental Assets in Kids

“The district has attacked the developmental asset skills and we’re working with community organizations such as the Boys and Girls Club, churches, the YMCA—pulling a lot of the community in. There’s really going to be a push in the community to see what each of us can do to help kids become their very best. The more assets kids have, the more successful they’re going to be in life. This is what you guys (in the Portage Exchange Club) are all about."

Kelly Claussen Bermis is the new Athletic Director at PHS, having been assistant AD for four years. Bermis attended Portage schools from kindergarten through high school. She taught for 29 years, teaching everything at the elementary and middle school levels except fourth grade.

She is excited about the new seasons starting up, and especially having another Portage grad, Wally McCormack, as football coach.

John Zack, a 1992 Portage graduate, spent sixteen years as a teacher. He has taught special education and technical and career education. He is married to his high school sweetheart, who is also a teacher in the Portage system.

“We came back to the area when it was time to start a family because we valued what we got out of the town here and out of the school system.”

Zack is the newest member of the Portage Exchange Club. He will be in charge of bringing the Students of the Month to the meetings on the second Tuesday of every month during the school year. He works with sophomores.

Mike DePasquale deals with attendance. He was born and raised on the north side of Chicago. During his school years he was involved in football, marching band and drama. He attended Valparaiso University and did his student teaching in Portage under the direction of Bill Timmermann.

“I taught in Streator, Illinois, for three years. It was a nice little town, but my wife and I weren’t really used to small town life. When Bill Timmermann called and told me there was a job opening and asked if I would like to interview, it was an easy decision.”

He was band director at Portage for twelve years before becoming an administrator.

“The vision of leadership here and the students make me want to stay in Portage. They are just fantastic.”

Mike Spagna works with the freshmen. This is his twenty-second year in education, four as an administrator. Previously he taught social studies.

“Portage is special because of the direction that we’re going. We’ve improved test scores because everyone works hard. The teachers work hard, the administration works hard, the parents work hard, and so the kids have good examples of what it means to work hard.”

Brett Munden, who was unable to attend the meeting, has been at Portage for six years. He was previously at Edinburgh Middle School. He works with Mike Spagna in the freshmen wing. Munden supervises the ninth and tenth grade looping program, alternative school, and credit recovery. Credit recover allows seniors to catch up on the credits for graduation.

Swickard concluded the comments. “I am very proud of this group, and I hope you know that we are all very proud to serve this community and to help our kids be better people, be well educated and go out into the world and be successful. We hope they will come back to Portage and help make it an even better town than it already is.”