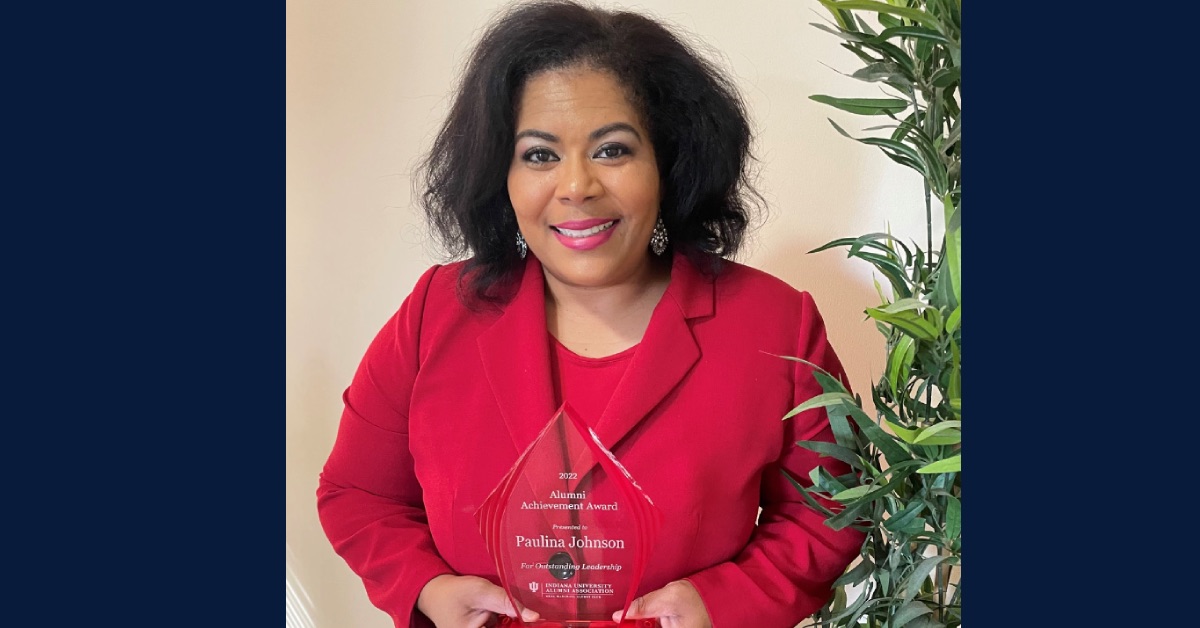 Paulina Johnson has been the recipient of several “firsts” in her life. In 1998, she became the first person to complete an Indiana University Northwest Bachelor of Science in Computer Information Systems in just three years. Fast forward some years plus the achievement of her MBA degree, and Johnson became the first African American female Global Account Manager at ArcelorMittal, the second largest producer of steel in the world.

In this senior leadership position, she is responsible for providing commercial leadership and management, developing and implementing a selling strategy, and driving global cooperation and decision-making for the Ford account.

Although Johnson enjoys overwhelming success today, her future didn’t always look so bright. As a teen mother living in poverty, the odds were against her.
“At that time in my life, I had very few people who championed my success,” Johnson said. “[They] believed that as a teen mother, my educational goals would be nearly impossible to achieve.”

But nearly impossible still leaves room for overcoming the odds. Despite her tough financial situation, mounting family responsibilities, and living on scholarships each semester, Johnson willed success into her life. “I was intentional about my studies and planned every semester of classes from my very first year,” she said. “My dedication paid off because I graduated at 20 years old.”

Post-bachelor’s, Johnson returned to IU Northwest, earning her MBA in Marketing Administration in 2002. She said the sense of community on campus and the support of her undergraduate professors motivated her to press on in her education.

Her experience at the university inspired her to be a self-starter and got her comfortable with working with people of all backgrounds. These skills became instrumental in her professional roles with ArcelorMittal.

“I have spent the last 20 years as a sales leader for one of the world’s leading steel companies. I am honored to have been mentored and advocated for throughout my career. While growing up, I didn’t envision myself working in the industry, I am proud to be a second-generation steel employee, standing on the shoulders of my father. I believe it is my responsibility to pay it forward every chance I get,” she said.

But her technical credentials don’t hold a candle to all the awards and recognitions she’s received over the years. She’s been named a Rising CEO from Detroit Young Professionals, 40 Under 40 by Crain’s Detroit Business, Rising Star by Automotive News, Michigan Chronicle Woman of Excellence and received a Top 50 Under 50 Diversity MBA.

This July, Johnson added another award to her list of recognitions—IU Alumni Achievement Award from the Neal-Marshall Alumni Club. This award recognizes outstanding achievement, moral character, community service, and outreach to IU students.

“I was very overwhelmed, humbled and grateful,” Johnson said of receiving the award. “It has been one of the greatest honors I have received to date. To receive an honor from my alma mater’s alumni club made me feel that my hard work in my career is paying off.”

In addition to being a mother and senior business leader, Johnson is dedicated to being a mentor as well. She is an active member of Alpha Kappa Alpha Sorority, Incorporated®. In 2008, she self-published a memoir entitled I AM YOU—Achieving Against All Odds, in which she reflects on generational poverty and her struggles as a teen mother.

“I wanted to share my story of turning tragedy into triumph, to inspire others who read my story to be inspired to fulfill their dreams, despite any obstacles they face,” she said.

Motivated by her son Paul and an inner sense of perseverance, Johnson showed that the word impossible is nothing more than an opinion. “I’ve always had an internal belief that no matter what obstacle I faced, I would accomplish every goal I set for my life,” she said.

Johnson posits that if you take it one day at a time and make temporary sacrifices as needed, success will come your way. “Do not become overwhelmed with massive tasks. Focus on the smaller ones so you can gain confidence and strength to continue to persevere.”

So many of us can relate to Johnson’s story in one way, or another. It’s encouraging to know that with nothing but dedication, we can all achieve something great, even when the odds don’t look good