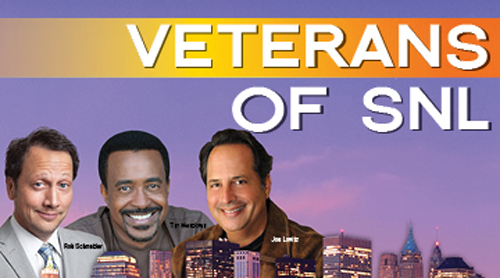 Tickets are on sale for $65, $49 and $35 and can be purchased by credit card at Ticketmaster.com or in person at The Gift Box in the Blue Chip Casino pavilion. Guests must be 21 or older, with a valid state or government issued photo ID.

During his four seasons at SNL, Rob Schneider was nominated for three Emmys and a Peabody Award. Among his many film credits are writing and starring roles in “Deuce Bigalow,” “Deuce Bigalow: European Gigolo,” “Deuce Bigalow: Male Gigolo,” “The Hot Chick,” “The Animal,” “Shark Bait,” “The Waterboy” and “Big Daddy.” His collaboration with Adam Sandler’s Happy Madison production company has resulted in starring roles in “50 First Dates,” “The Longest Yard,” “You Don’t Mess with the Zohan” and many others.

Tim Meadows established himself as a versatile performer on Saturday Night Live in the early 90s, with recurring characters such as sitcom star “G-Dog,” “The Quiet Storm” host Chris Garnet, Russell Johnson of the tough-talking law firm of Russell and Tate, “Perspectives” host Lionel Osbourne and more. Film credits include roles in “The Coneheads,” “Wayne’s World II,” and “It’s Pat.”

Jon Lovitz played many oddball characters on SNL. As Tommy Flanagan, president of Pathological Liars Anonymous, he single-handedly made “Yeah, that’s the ticket!” a catchphrase that still lingers today. He has appeared in 11 films, including “A League of Their Own,” “Big,” “Three Amigos,” “Jumping Jack Flash,” “City Slickers ii,” “Loaded Weapon One,” and “Mr. Destiny.”