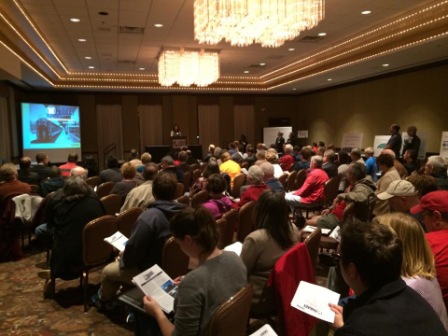 "People were generally supportive of the expansion," says RDA COO Sherri Ziller, who was on hand to answer questions about financing. "Understandably there are concerns about cost, the locations of stations, the impact on traffic and many other aspects of the project, but there's also an awareness of the huge potential benefits to the region."

The session was part of the process of drafting a federally required environmental impact statement for the project. "We want to make sure that anyone who is interested can voice their opinion and be heard," says NICTD Planning and Marketing Director John Parsons. "Anyone who is not able to come to a public session can also submit comments online at www.nictdwestlake.com."

In continuing support of the expansion project, both the Northwest Indiana Forum and the Northwestern Indiana Regional Planning Commission recently renewed their backing for the West Lake Corridor project. Both groups passed resolutions calling for extended state funding for the RDA and expanding the South Shore in 2013 and have updated them for this year.

The West Lake Corridor extension and upgrades to the existing line are projected to create nearly 2,000 jobs in Northwest Indiana. The project is part of the Northern Indiana Commuter Transportation District's 20-year strategic plan to create jobs and boost the economy of the region and the state. When in full operation, the extension will serve more than 5,000 daily riders who will bring back about $147 million in annual salaries to spend on goods and services in Northwest Indiana. That's a 62% increase over the income returned by the existing South Shore line. The extension will also increase property values, spur transit-oriented development in communities on and near the new line, and increase the region's attractiveness to companies looking to relocate to Indiana. The RDA has pledged $8 million annually over the next 30 years to fuel construction of the West Lake Corridor.