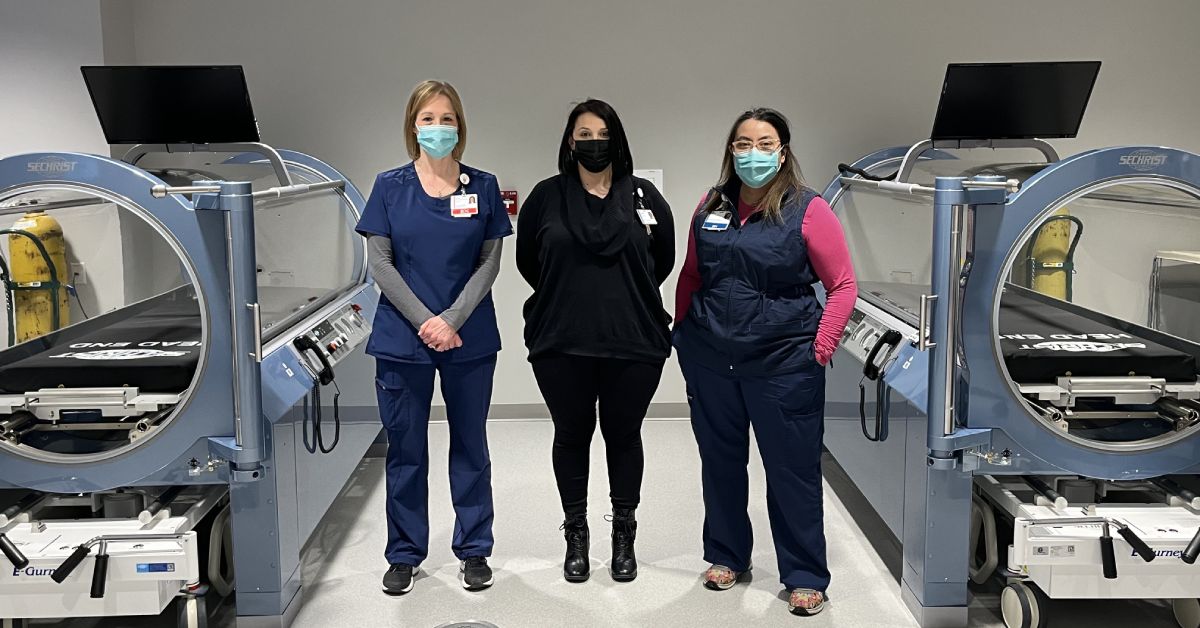 The clinicians at the Wound Center use hyperbaric oxygen (HBO) therapy to reintroduce the body's innate ability to heal chronic wounds by increasing the amount of oxygen to wounds and allowing them to heal from the inside. Some say it’s a new perspective on the folk wisdom that “fresh air cures anything”.

Patients receiving HBO treatments at Northwest Health – La Porte watch television while relaxing on a bed encased in a large see-through plastic shell as they are surrounded by 100 percent oxygen at higher-than-normal atmospheric pressure.

Under hyperbaric conditions, oxygen molecules in the patient's red blood cells become reduced in size to more easily dissolve into the liquid portion of the blood and be transported throughout the body to speed healing.

During the non-invasive procedure, the only sensation patients experience is a slight pressure in the ears, as on an airplane, when the pressure changes.

HBO treatments are used to heal skin grafts, crush injuries, burns, pressure sores, gangrene, wounds that have not responded to traditional treatments, and to save limbs from amputation. Treatments are typically covered by Medicare, Medicaid and most insurance plans.

Chronic wounds affect more than 8 million people in the U.S. and the incidence is rising fueled by an aging population and increasing rates of diseases and conditions such as diabetes, obesity and the late effects of radiation therapy.

To learn more about Northwest Health’s Wound and Hyperbaric Centers and how they can help with difficult to heal wounds visit: https://www.nwhealthin.com/wound-care-service or call 219-326-2476. Patients may schedule a consultation without a physicians’ order.

Northwest Health offers a free e-newsletter with a monthly dose of health and wellness inspiration sent directly to your inbox from a trusted medical source. Visit NWHealthIN.com to sign-up.