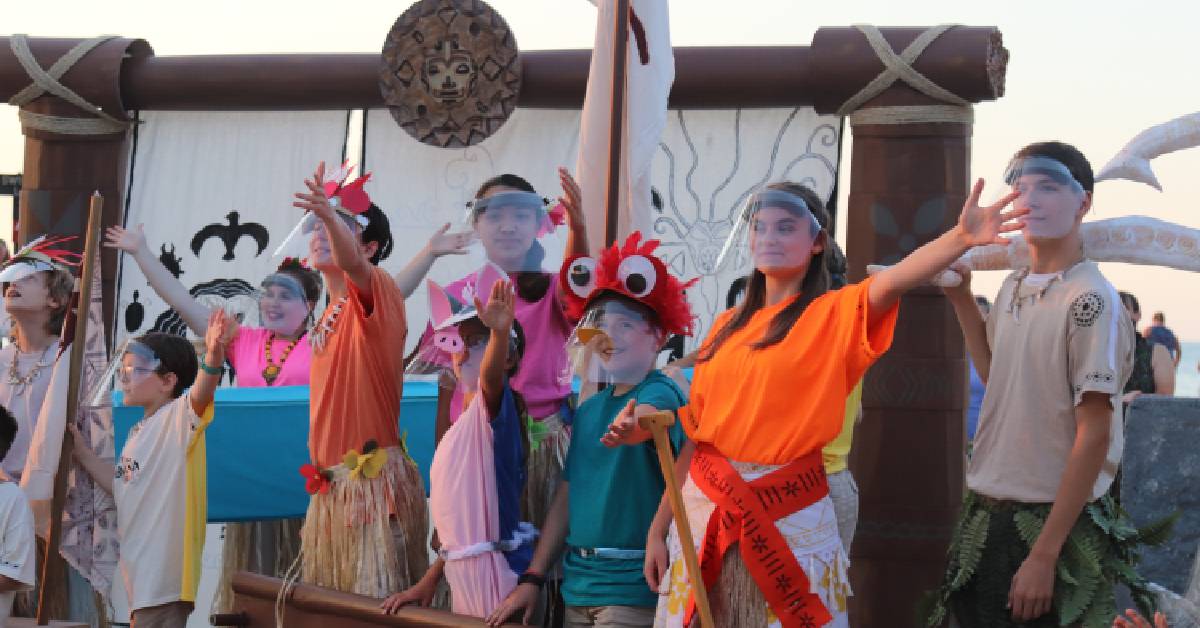 Audience members sat with their toes in the sand, the sound of softly crashing waves adding to the ambiance of the already impressive show – it was the perfect setting for the telling of this beloved Disney story.

“There is literally not a more perfect show for this setting than Moana,” said Director Becky Jascoviak. “I am super excited because we had planned to do this show before the pandemic, and when all the theatres had to shut down we wanted to find a way to still give these kids an opportunity to perform. I love seeing our kids who have never been on stage get a chance to shine.”

Amy Crane, parent of William Crane (Maui) and Ella Crane (Tamatoa), was thrilled when she learned of the production and the opportunity to keep theatre alive despite the challenges of COVID-19.

“We were excited to see something available that we felt was still safe,” Crane said. “I think it’s great to see people trying new things with theatre and bringing it back. Even though we can’t be sitting in the theatre with the curtain and everything we’re used to, theatre is still alive and well.”

To make this show happen, Co-Director Jerry Jascoviak and his team worked tirelessly to ensure everything was in compliance with all CDC and state regulations regarding COVID-19, and in doing so restored lost opportunities for performers like William.

“William was actually set to be the lead in his high school’s show, but they shut down due to COVID-19 and he never got to see that role through,” Jascoviak said. “That’s why we worked so hard to make this happen, to give them that chance and to give the audience a chance to connect with an outdoor experience, especially after we’ve all been cooped up inside lately.”

With COVID-19 regulations came many challenges when preparing for opening night, but these hurdles were no match for this crew of young actors.

“This year has been very different than what we would normally do because of COVID-19,” said Choreographer and Stage Manager Julie Breford. “We did auditions online, so the kids had to submit videos rather than try out in person. We also held a lot of outdoor rehearsals at local parks. The kids actually learned the material very quickly and efficiently, so they did a really great job with all the changes we’ve made.”

Perhaps the most impressive adjustment was recording all of the kids’ parts separately at home and stitching them together to form a cohesive audio come showtime.

“We did a lot of at-home singing and recording of voices so the audience could hear since the kids had to wear masks,” Breford explained. “We managed to put this show together in one month, which is much less time than we’re used to, but we went ahead and gave this a shot and now here we are, ready for opening night!”

The show was presented by Seedlings Theater Co., which is comprised of performers all under the age of 18. While the NIETF Park Plays is in its fifth season, this its second year partnering with Seedlings Theatre Co. 17-year-old Kacey Marovic, who played Moana this year, decided to make the jump from audience member to performer after seeing last year’s production of Frozen Jr.

“I saw Frozen Jr. last year and I thought it was really interesting and a new way of performing, so I was like why not give it a try and expand my horizons,” Marovic said. “It was tough showing up to rehearsals in a mask and learning to get my words out there, but it was fun nonetheless and everyone here is so nice. I’m really looking forward to tonight’s performance and just having a good time.”

“This took a lot of preparation and I could not be more proud of all of these kids,” Jascoviak added. “To be able to give them this opportunity despite all that’s going on is incredible, and I hope the audience enjoys this show as much as we’ve enjoyed making it.”

If you missed Thursday’s performance, never fear! There’s still one more chance to catch this memorable production of Moana Jr. next Thursday at 6:30 p.m. The show will again take place at the Indiana Dunes State Park. While the show itself is free of charge, there is a small fee to enter the park.

For more information on Park Plays or the Northwest Indiana Excellence in Theatre Foundation, visit http://nietf.org/park-plays/