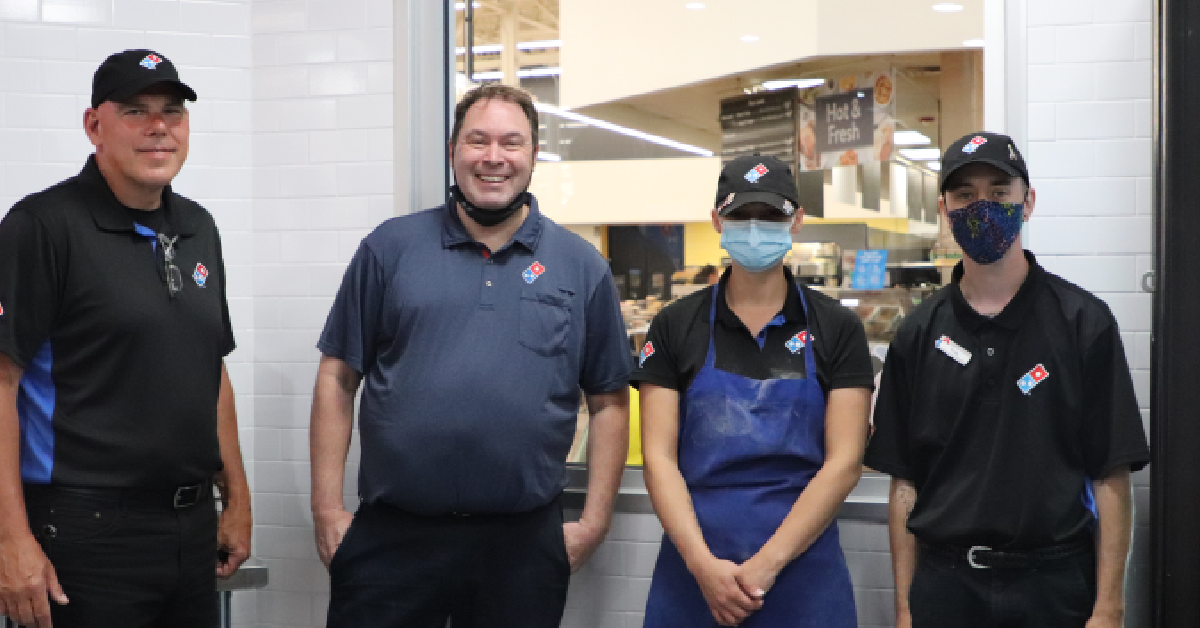 A new Domino’s Pizza has opened within the Walmart on Franklin Street in Michigan City. Even on their opening day, hungry customers flocked to the site and the smell of freshly baking pizza filled the waiting area.

The customers and staff were excited about the pizza, but the staff had bigger things in mind. They were all incredibly proud of their new location and team.

“I’ve been with this franchisee, Jim, since October and I’ve been with Dominos since I was 18. I’m 27 now, so it’s been a long time,” said Sonya Stark, General Manager. “We get along great, these last couple of weeks setting up this store has just been awesome. I’ve gotten to learn a little bit more about his pizza story. It’s been so much fun.”

Stark is clearly passionate about her job. She has been with Domino’s for a while, but Jim Gronemann, owner of the Domino’s on Franklin Street, has been with the company for even longer. When she refers to his ‘pizza story’ she means the tale of his time with Domino’s, and it is an interesting one.

“I started as a delivery driver, back in ‘84,” said Gronemann. “Then I went into management, and now I’m an owner. The opportunity to grow is what made me originally stay. Now, as a business owner, I love building stores and opening up new stores. As well as being able to make a difference in people’s lives as far as customers and employees.”

Gronemann’s care for his people and customers is not simply for appearances and his staff sees this everyday.

“This franchisee is just awesome. He takes care of his people and cares about every single one of us,” Stark said.

Stark and Gronemann are both ready to continue working on this franchise and are looking forward to their new staff.

“When we were hiring, we hired the best of the best because we are paying top-notch for top-notch people,” said Stark. “So adjusting to the staff won’t be too big of a deal. As different as we all are, we all tend to click and mesh together really well.”

Gronemann is specifically proud to be fully staffed at a time where not many businesses are, he believes this is due to employee incentives.

“We got a pretty good number of people especially nowadays, a lot of restaurants and businesses are struggling to get staff,” Gronemann said. “We’ve upped our pay scale, and rolled out a bunch of different employee incentives and some rewards programs and I think it’s made a big difference. We had enough people apply to the point that we are actually fully staffed.”

This new location is located at 5780 Franklin St in Michigan City, Indiana. It is not only a busy stretch of road to reach as many hungry people as possible, but it is also in a unique spot for a Domino’s.

“This location is special because it’s in a Walmart which is unusual for Domino’s,” Gronemann said. “There are only about 25 of them across the country right now. This is my second Domino’s inside a Walmart, so that would be the biggest thing that is special about this particular one, otherwise, it operates like any other Domino’s.”

And just like any other Domino’s, the location on Franklin Street is open and ready to serve piping hot pizzas, pastas, and sandwiches through delivery, pickup, and dine-in.